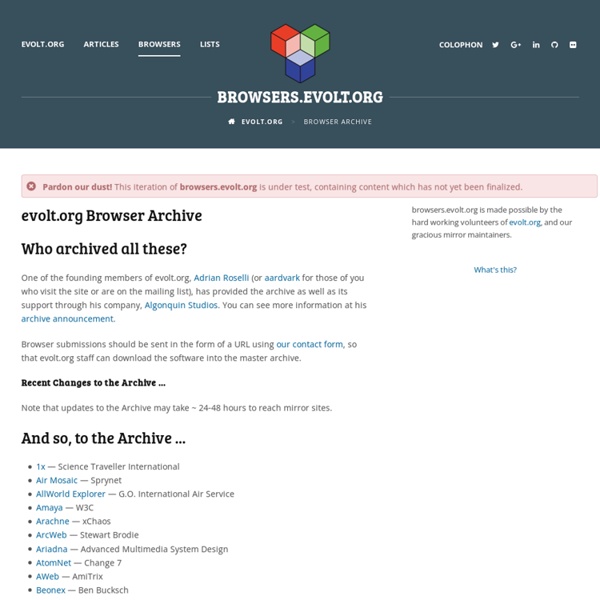 Cross Browser Testing. Pick an OS, Pick a Browser, Test website Selenium web application testing system Taming Your Multiple IE Standalones Return to p.i.e. A Guest Article by Manfred Staudinger Most of the improvements in conditional comments talked about in this article have now been incorporated into an easy-to-install set of IE standalone versions available at Tredosoft.com. We recommend this install very highly, so enjoy! Multiple versions of Explorer for Windows on a single computer have revolutionized CSS bug testing for websites, but sadly the different IE browser windows appear identical to the eye, potentially leading to confusion and testing mistakes. What Are These Standalones? When Joe Maddalone first came up with Multiple Version of IE in Windows XP Pro in November 2003, this was a great relief for web developers. For Windows to allow several Explorer versions running side by side on one machine, this process specific subroutine library, in short process library , must contain the starting module for the process (iexplore.exe), the trigger (iexplore.exe.local), and any required process specific dll's. Cookies <!

Talks at the 2009 jQuery Conference This past weekend was the 2009 jQuery Conference here in Boston. It was an incredible event – 300 people attended and a ton of discussion, collaboration, and learning happened. Nearly the entire jQuery project team had the opportunity to meet for two days prior to the conference and hash a number of things out – figuring out most of the planning for the upcoming year. The core dev team also had the opportunity to meet and work for two days just after the conference. We’re much closer to shipping 1.3.3 now (which is likely to become 1.4, with all the new features that’re being added). (Left to Right: Mike Hostetler (Infrastructure), John Resig (Core), Paul Bakaus (UI), Brandon Aaron (Core), Richard D. A full list of the presentations that were given can be found on the events site. Recent Changes to jQuery’s Internals A run-down of all the features and internal changes made in 1.3, 1.3.1, 1.3.2, and 1.3.3/1.4. Understanding JavaScript Testing State of jQuery ’09 Comments are closed.

Portable Appliance Testing, Electrical Inspection and Testing, PAT Testing How often do I need to test my equipment? The IEE Code of Practice suggests that the testing frequency is based on not only the type of equipment but the class of equipment and also the location, environment or type of business in which the equipment is used. Equipment Type Hand held appliances for example are much more likely to be damaged than fixed appliances. Users If users of equipment are trained in line with your company's own Health & Safety Policy / Training to report faults promptly either when they occur or upon visual inspection prior to using the equipment, a large number of potential hazards will be avoided. Environment If equipment is used in an environment where it is more prone to suffer damage, such as on a building site or other high risk environment, then the testing should be done more often than in an office environment, where the equipment is not subjected to the same adverse conditions. Equipment Construction New Equipment

CSS3 support in Internet Explorer 6, 7, and 8 What is it? IE-CSS3 is a script to provide Internet Explorer support for some new styles available in the upcoming CSS3 standard. How it works If you're viewing this page in Internet Explorer, some of the elements have been rebuilt by the script in Vector Markup Language (VML), an IE-specific vector drawing language. How to use it Just add CSS styles as you normally would, but include one new line: Issues and Workarounds You would expect URLs in behavior: url(...) to be relative to the current directory as they are in a background-image: url(...) style for example, but instead Microsoft decided to ignore standards here and make them relative to the docroot instead. You will probably run into issues with z-index, especially if embedding one IE-CSS3 enabled element inside of another. Set the z-index of the IE-CSS3 element to a number larger than its surrounding elements. Sometimes an IE-CSS3 element will show up at a slightly different position than the original, untouched element.