50 Apps Students Will Be Using In Your Classroom 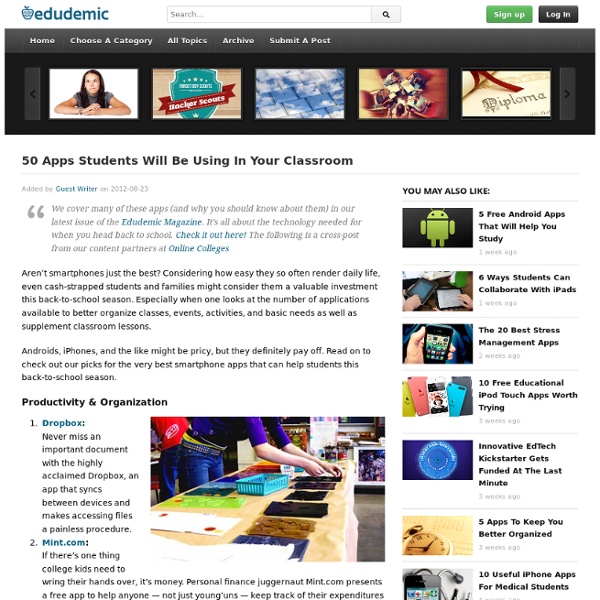 5 Useful iPhone Apps For Student Bloggers 9.43K Views 0 Likes Student blogging is a wonderful way to get into the world of online writing and learning. These iPhone apps for student bloggers will enhance their skills. 6 Interactive Storytelling Apps For Younger Students 11.39K Views 0 Likes Getting younger students to tell stories can promote a variety of different language arts skills in a way that is a lot more fun than doing grammar drills.

Blogs & Wikis as WebQuest Tasks - NECC 2004 Wikis, on the other hand, seem tailor-made for WebQuests based on the Compilation or Recommendation designs. SDSU graduate students compiled a micropedia about Educational Games and Simulations in Fall, 2003 and next Fall's class will add to it. Another compilation example is the Election 2004 WebQuest from Austria in which information about the next U.S. election is collaboratively authored by students. As an example of a Recommendation design, Dan McDowell has written a WebQuest about India and Pakistan which culminates in drafting a peace accord using a wiki. In summary, these two formats have a lot of potential for use within WebQuests.

3 Principles for great online courses I love teaching. It’s all about that “ah-ha” moment someone gets. You see their eyes light up as the revelation sweeps over them. - Apps for Core Literature Standards, grades 6-12 0 Comments November 17, 2011 By: Vicki Windman Nov 17 Written by: 11/17/2011 3:46 AM Synonyms Dictionary at SnappyWords.com It’s an online interactive English dictionary and thesaurus that helps you find the meanings of words and draw connections to associated words. You can easily see the meaning of each by simply placing the mouse cursor over it. Why use Snappy Words visual dictionary? Easy to use dictionary and thesaurus. Learn how words associate in a visually interactive display.

The 100 Best Web 2.0 Classroom Tools Chosen By You The Wordle of this list! (Click image to enlarge) One of the most popular posts on Edudemic in 2010 was The 35 Best Web 2.0 Classroom Tools Chosen By You and I felt it might be time for an update to that list for 2011. In order to put together a list of the best Web 2.0 classroom tools, I polled my Twitter followers, Facebook fans (are they still called fans? Likes?) and ran a contest to try and get as many submissions as possible. Halloween How did it start? Why do people wear costumes? Learn about the history of this spooky holiday. Social Media in Higher Education “Social Media Manager” was recently named one of the Best New Jobs in America, according to CNN. Looking ahead to 2013, social media is set to become a required skill-set, as demand for professionals experienced with social media continues to rise. Social media is gaining adoption company-wide, and currently there are over 13,000 job postings per month requiring social media skills.

100 iPhone Apps for Kids Anyone without children has a pretty difficult time understanding how a person decides to hand their $200 cell phone to a three year old, but the truth is iPhone’s can be an incredibly rich learning and entertainment tool for children. The directness of the touch screen interface means that children can easily figure out a number of different apps with very little instruction. If your kids love your iPhone as much or more than you do, you’ll definitely want to take a look at the huge list below of great apps for kids of all ages. The apps are divided into multiple categories but are almost all educational and/or focused on encouraging creativity. Music and Audio: Toddler JukeBox

Improve Your Pronunciation One of the most important aspects of learning English is pronunciation. Without clear pronunciation, it is difficult to make yourself understood. However, you might be surprised by the following statement: Pronouncing every word correctly leads to poor pronunciation! Good pronunciation comes from stressing the right words - this is because English is a time-stressed language. In other words, some words - the content words - receive more focus, whereas other words - function words - are less important. Learn more below.

What Makes Project-Based Learning a Success? At one high school in Texas, where every class in every grade is project based, the answer is devotion to a consistent process, belief in relationships, and commitment to relevance and rigor. Results? Hard to beat. Thanks to an effective PBL model and a school culture that values relationships and autonomy, Manor New Tech students, teachers, and its principal, Steven Zipkes (right), are achieving impressive results.

Ask3 for iPad: Put an end to homework confusion! The second students walk out of a classroom they often leave behind their ability to collaborate and problem-solve. Many are unable to get help at home and have to wait to ask questions until the next time they’re in class. Ask3, our new iPad app, aims to solve this problem. Ask3 is a free app that allows teachers and students with iPads to easily share knowledge and collaborate via threaded, text and video conversations. By recording voice, drawings, and images, Ask3 can be used to quickly create videos that are shared directly through the app to a small group or class through a private code. To foster collaborative learning, students can pin questions at exact points within a video that are visible to the entire class, and other students can create responses in real-time by adding their own text and video responses.

10 educational iPad apps recommended by Explore Knowledge Academy - Tuesday, Feb. 21 iTunes/App Store Word Wizard Word Wizard is a spelling application for the iPad that allows students to hear sounds of letters and words using an interactive alphabet. The application also provides a spelling quiz with more than 1,400 questions and answers. Elementary school students can tap on alphabetic or QWERTY keyboards. Costs $2.99 in the App Store. Essential knowledge and literary terms for understanding Shakespeare. An Award winning You - you- your- your formal and distant form of address suggesting respect for a superior or courtesy to a social equal. Thou - thee - thy - thine informal and close form and can imply either closeness or contempt. Gertrude: Hamlet, thou hast thy father much offended.

Bill Nye, The Science Guy, Says Creationism is Bad for Kids and America’s Future Bill Nye will tell you that he’s a man on a mission. He’s out there trying to “help foster a scientifically literate society, to help people everywhere understand and appreciate the science that makes our world work.” From 1993 to 1998, Nye hosted Bill Nye the Science Guy, a Disney/PBS children’s science show that won 18 Emmys along the way. A graduate of Cornell and a student of Carl Sagan, Nye has also presented shows on the Science Channel, the Discovery Channel and other media outlets. If you’re familiar with Bill Nye, you’ll know that he’s not exactly an in-your-face kind of scientist.