Never, ever give up: Arthur's inspirational transformation 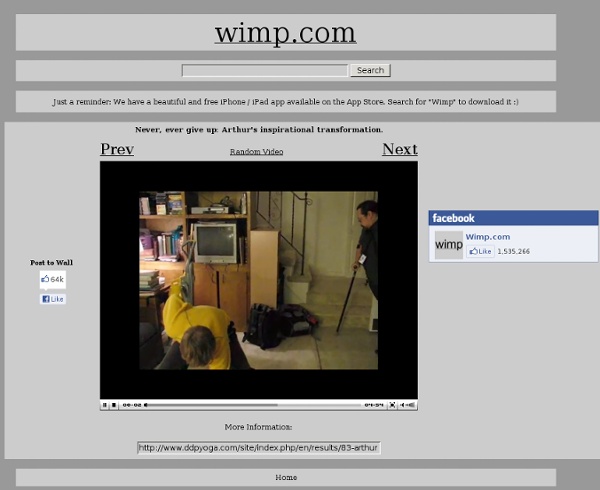 Sports presents the most memorable moments in Summer Olympic history. Usain Bolt claimed his second Olympic gold medal in the men's 100 with a blazing 9.63 seconds. More » Instant moment: Usain Bolt wins 100 meters – again In what he says will be his final Olympic race, Michael Phelps paced the U.S. men to gold in the 400 medley relay. More » Instant moment: Michael Phelps swims into retirement with 18th gold Roger Federer survived three sets and more than four hours of play to beat Juan Martin del Potro More » Instant moment: Roger Federer wins longest Olympic match ever Gabby Douglas led from start to finish to become the third straight American woman to win the gymnastics all-around title. In golden fashion, Michael Phelps won medal No. 19 to move ahead of Larissa Latynina. The U.S. women won team gold for the first time since 1996 thanks to a strong performance from Jordyn Wieber. After whiffing on the Beijing Games four years ago, Dana Vollmer charged back in London to win a gold medal in the 100-meter butterfly and set a new world record. Yahoo!

Badass of the Week: Anthony Omari Anthony Omari Late on the night of January 23, 2012, a 24 year-old Kenyan uber-hero named Anthony Omari awoke to find three gigantic dudes with machetes standing over his bed. He knew right away that they weren't there to sell Girl Scout cookies or ask him for a jumping mid-air high-five. Omari is the custodian of Faraja Children's Home in Ngong, Kenya – a sanctuary of healing and love that over the past several years has grown from a tin-roofed one-room shack in the slums of Nairobi into a decent-sized facility that has taken in 37 boys and girls who have been abandoned or orphaned from the street. The second Omari snapped awake, he immediately recognized the jokers standing around him – it was the fourth time this month that the Faraja Children's Home had been broken into, and it was at least the second time that these exact assholes had paid the orphans a visit in the middle of the night. A Kenyan machete, also known as a panga. The gang had seen enough. Links: The original post Main

Husband banned from Target Husband banned from Target After I retired, my wife insisted that I accompany her on her trips to Target. Unfortunately, like most men, I found shopping boring and preferred to get in and get out. Equally unfortunate, my wife is like most women - she loves to browse. Yesterday my dear wife received the following letter from our local Target. Dear Mrs. Over the past six months, your husband has caused quite a commotion in our store.. 1. 2. 3. 4. 5. 6. 7. 8. 9. 10. 11. 12. 13. 14. And last, but not least: 15. Hope this made you laugh as it did me. Meet singles at DateHookup.com, we're 100% free! T-Shirt Underwear I know you've got them, lurking in drawers, the back of the closet, in the "giveaway" pile: those T-shirts that are, for various reasons, both unwearable and indispensable. They are too small, too big, too short, have a stain, a hole, or some other flaw, and yet you cannot bear to part with them. I took my old t-shirts and gave them new life. The Concept My first pair came about because of an ill-shapen tee with a great air-brushed-style kitty face on the front. Late one night I was folding laundry. It's true that, as an undergarment, not many people will ever see this creation. Check out the pattern PDF. select a shirt Find a clean (if you care) shirt that strikes your fancy. sew the major seams SEW THE MAJOR SEAMS First take your crotch piece, and hem the wider end, folding the edge over either once or twice. Fold crotch piece around to the front, so that it lines up nicely with the front section, and pin it in place. try it on prep the edges finish the edges insert the elastic

Long Distance Running Biomechanics – Marathons in the Animal Kingdom Max Speed: 27.45 mph (Usain Bolt, 100 meters) Average Speed for 20+ Miles: 12.7 mph (Haile Gebrselassie) Best Marathon Time: 2:03:59 (Haile Gebrselassie, Berlin) Are humans born to run? One major difference between humans and animals is that we don't have in-born endurance; we have to train. The Egg The Egg By: Andy Weir You were on your way home when you died. It was a car accident. And that’s when you met me. “What… what happened?” “You died,” I said, matter-of-factly. “There was a… a truck and it was skidding…” “Yup,” I said. “I… I died?” “Yup. You looked around. “More or less,” I said. “Are you god?” “Yup,” I replied. “My kids… my wife,” you said. “What about them?” “Will they be all right?” “That’s what I like to see,” I said. You looked at me with fascination. “Don’t worry,” I said. “Oh,” you said. “Neither,” I said. “Ah,” you said. “All religions are right in their own way,” I said. You followed along as we strode through the void. “Nowhere in particular,” I said. “So what’s the point, then?” “Not so!” I stopped walking and took you by the shoulders. “You’ve been in a human for the last 48 years, so you haven’t stretched out yet and felt the rest of your immense consciousness. “How many times have I been reincarnated, then?” “Oh lots. “Wait, what?” “Well, I guess technically. “Sure.

Famous life quotation | Our Funny Planet The tragedy of life is not that it ends so soon, but that we wait so long to begin it. (W. M. Lewis) The only true wisdom consists in knowing that you know nothing If you can't get rid of the skeleton in your closet, you'd best teach it to dance. When the power of love overcomes the love of power, the world will know peace. My tastes are simple: I am easily satisfied with the best. You only live once, but if you do it right, once is enough. Before you embark on a journey of revenge, dig two graves. Your time is limited, so don`t waste it living someone else's life. Everything comes too late for those who only wait. Not everything that can be counted counts, and not everything that counts can be counted. Write to be understood, speak to be heard, read to grow... Don’t settle for a relationship that won’t let you be yourself. In three words I can sum up everything I've learned about life. ShareThis

belle and burger: Panty Tutorial: How to make your own drawers Well folks I think I have been talkin' about this tutorial for about a year, so I finally pulled it out. There are millions( ok maybe not millions, but a whole heck of a lot) of variations and add ons but I was trying to do the simplest one first. Materialsthreadsewing machine1 yd stretch elastic or fold over elasticpaper for pattern(paper bag or newspaper)scissorsold t shirt or any knit materialpair of underwear to cut and make pattern from Make your knickers !! 1. 2. Lie the pieces as flat and symmetrical as possible on your pattern paper(I Try to use the manufactured straight edge of my paper as the center fold line, This way I know that line is straight) Trace around your fabric piece leaving about 1/8-1/4 " edge. This pattern may take a bit of tweaking to get the way you like so use up and the oldest ugliest t-shirts on your first pair then you can make adjustments to your pattern from there 3. I cut the front panel from a large enough scrap of fabric I had in my cotton knit pile. 4.

It's Fitness, Baby | Your motivation for fitness training – call your fitness trainer or get yourself a fitness program and let the workout begin. | Page 26 You are so much stronger! 50 ways to lose 10 pounds How To Be Happy — What I Learned Today 7. Stop checking email in the morning. Seriously cut that garbage out. Things to try when you first wake up: Just lie in bed and think about one thing you want to do better today.Go for a walkMake love. 6. It’s hard and almost everyone does it but this is one of the easiest ways to spiral into unhappiness. Things to try to compare yourself to: You, 3 months ago. 5. It’s really simple. What is another? Things to be grateful for: Your health. 4. Ok put down your iThing and step away from the TV. Things to do outside: Take a walk. 3. Whether it’s something simple like buying a coffee for a friend or doing charity work, the act of giving opens up your heart. Things to give to people: Your time. 2. This may sound odd but many times we aren’t actually unhappy, but we just have a bazillion thoughts running around in our head. Things to write down: Your dreams. 1. Dude, quit hating on yourself. Things to give to yourself: Forgiveness.