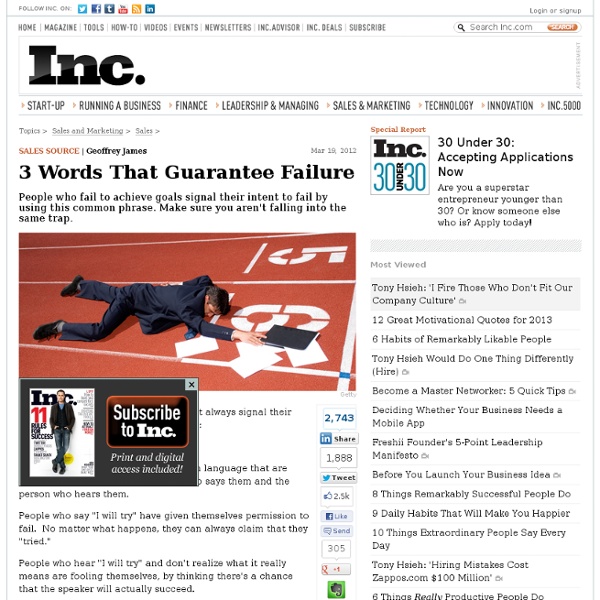 People who fail to achieve goals almost always signal their intent to fail by using three little words: "I will try..." There are no three words in the English language that are more deceptive, both to the person who says them and the person who hears them. People who say "I will try" have given themselves permission to fail. No matter what happens, they can always claim that they "tried." People who hear "I will try" and don't realize what it really means are fooling themselves, by thinking there's a chance that the speaker will actually succeed. People who really and truly achieve goals never say "I will try." Instead, they always say "I will do" something–or, better yet, "I must do" whatever the task is. As a wise (though fictional) guru once said: "Do, or do not.

16 Things I Wish They Had Taught Me in School I am 28 now. I don’t think about the past or regret things much these days. But sometimes I wish that I had known some of things I have learned over the last few years a bit earlier. That perhaps there had been a self-improvement class in school. And in some ways there probably was. Because some of these 16 things in this article a teacher probably spoke about in class. Want People to Return Your Emails? Avoid These Words [INFOGRAPHIC] Next time you write an email subject line, think twice about the words you're using. Loading your message with words such as "confirm," "join," "press," or "invite" is not a good idea if you want a response, says data from Baydin, the makers of email plugin Boomerang. Baydin recently extracted data from five million emails its users handled — either using the company's "email game" or scheduled for later via Boomerang. It found that some subject-line words, such as "apply" and "opportunity," got more responses than words from the aforementioned list.

Reinvent Your Career by Writing Your Own Narrative - Christopher Bowe by Christopher Bowe | 1:45 PM May 4, 2012 A topsy-turvy world like the one in which we live offers us tremendous opportunities. But to tap them, we must remove the barriers within ourselves. The crucial barriers are the ways we compartmentalize our experiences — keeping them uniquely bound to one kind of job or career.

Macho Cultures Are Fairer for Women - Avivah Wittenberg-Cox by Avivah Wittenberg-Cox | 12:08 PM April 27, 2012 In the past decade, and long before Dilma Roussef was elected the country’s first female (and wildly popular) President, Brazilian women have been on the rise. As in many other countries, women now outnumber men in the country’s universities. But the female edge in education (63% vs 37%) in Brazil is at the top of the scale, next to Sweden’s.

Cognitive Endurance Basics for Software Developers A few weeks ago Michael published a post called Product Software Development Is a Marathon. The message of this post is: if you want to come up with a decent product, you’ve got to brace yourself up for a long-distance marathon run. I agree to the point of long-distance and endurance, but I’d rather compare this not to a marathon but to a triathlon race. Triathlon requires diverse skills, you not only have to run, but to swim and to bike, and, as we know, good software developers need diverse skills, too.

What You Really Need to Apply for a Job—and What You Don't “An ideal candidate should have a strong marketing background, five years of experience in the consumer goods industry, a track record of designing and running complex marketing campaigns for new consumer products, proficiency with Adobe Creative Suite, and a graduate-level degree with a focus on marketing or public relations." How many times have you found your perfect job—and then taken a look at that list of requirements and decided there was just no way you could apply because you didn’t meet every one of the criteria they'd set out? Well, here’s a secret: You don’t really have to. Think of job descriptions as a hiring manager’s wish list for the ideal candidate, not as a list of non-negotiable requirements.

The Disadvantages of an Elite Education Exhortation - Summer 2008 Print Our best universities have forgotten that the reason they exist is to make minds, not careers Incredible Gadgets You Would Kill For - 20 Examples Gadgets are more unusual and more clever than normal technological objects and that makes them gain popularity. These wonderful gizmos ease our daily routine and keep us in contact with the innovative movement, making sure we don’t get stuck in the past. But of course, in the world of gadgets there are also some devices that take it a little bit far, making us gaze at them with hope that we will get our hands on them sooner. Learn to Survive the Most Common Deadly Bites I'd gladly be bitten/stung by any of those things than be stung by a suzumebachi; it's what I'm most afraid of here in my tiny mountain village in Japan. We have giant centipedes (mukade) that are creepy and have a nasty bite, but the suzumebachi will frakkin' kill you... sometimes with one sting. They're the Asian giant hornet, or "sparrow hornet," or "yak-killer" and they kill more people annually in Japan than all other animal attacks/bites/stings *combined*. Also, when they sting you, they emit a pheromone that attracts and enrages other suzumebachi, so as soon as you're stung, you're a walking target for other angry suzumebachi.