Back to School: 42 Digital Resources for Students & Parents 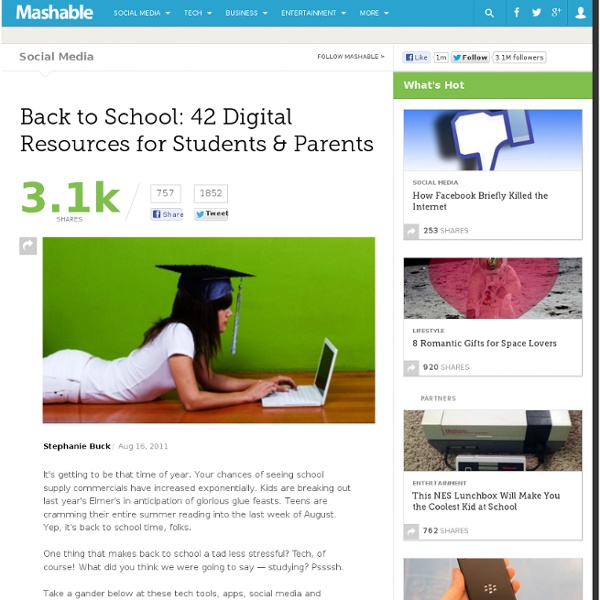 It's getting to be that time of year. Your chances of seeing school supply commercials have increased exponentially. Kids are breaking out last year's Elmer's in anticipation of glorious glue feasts. Teens are cramming their entire summer reading into the last week of August. One thing that makes back to school a tad less stressful? Take a gander below at these tech tools, apps, social media and parenting tips that will ease you or your kid into another school year. Tech & Mobile Education Tools 6 Reasons Tablets Are Ready for the ClassroomIf tablets have penetrated mainstream consumer markets, what's preventing them from widespread use in schools? Education via Social Media 4 Ways Colleges Can Take Their Social Media Presence to the Next LevelMost schools have a online social presence, but what strategies can they use to take it from good to great? Education Tips & Stats How Online Education Is Changing the Way We Learn [INFOGRAPHIC]Online education is a $34 billion business.

Playlist: Male call | TED News The Innovative Educator Starting the Year on a Positive Note Back in May, I asked readers to think of five things they'd done well over the last school year. I followed it up with a post on my personal blog reflecting on what I thought I did well. Now it's time for the school year to rev up again, and I'm hoping to not only keep doing what I did well, but also set some goals for the coming year. As this blog is a tech integration blog, I want you to think about something you want to do better or something new you want to try this year. As I have stated in many previous posts, the worst thing you can do when trying to bring new technology into your classroom, whether it be a simple web-based tool or a piece of hardware, is try to do too much. With the proliferation of Web 2.0 tool lists, blogs about successes teachers have had with particular endeavors, webinars, wikis, online communities and more, it can be easy to get overwhelmed. Don't Try to Be a Superhero Some Ideas for Implementation see more see less

New Frontier [W]e stand today on the edge of a New Frontier -— the frontier of 1960s, the frontier of unknown opportunities and perils, the frontier of unfilled hopes and unfilled threats. ... Beyond that frontier are uncharted areas of science and space, unsolved problems of peace and war, unconquered problems of ignorance and prejudice, unanswered questions of poverty and surplus.[2] In the words of Robert D. Marcus: "Kennedy entered office with ambitions to eradicate poverty and to raise America’s eyes to the stars through the space program."[3] According to Theodore White, under John F. Legislation and programs[edit] Economy[edit] The Kennedy Administration pushed an economic stimulus program through congress in an effort to kick-start the American economy following an economic downturn. The following month, the first of these seven measures became law, and the remaining six measures had been signed by the end of June. Taxation[edit] Labor[edit] Education[edit] Welfare[edit] Civil rights[edit]

Quick List: iPad Resources For The Classroom One question that comes into my inbox or on Twitter a lot lately is one dealing with iPads. Many schools and classrooms all over are investing in these devices and educators want to know how to use them effectively, apps to consider and more. In keeping with the "My Favorite Resources" theme (last week I listed my favorite resources for talking about Twitter) here are my go-to resources when people ask me about iPads in the Classroom. ISTE iPad In Education Webinar Resources A while back ISTE ran a great webinar with some fabulous educators on using iPads in the classroom. According to the National Council of Teachers of Mathematics, educators should... How do Asian nations make it to the top educational spots, and how does the U.S... Here are some useful links to hope your students comprehend this difficult... Here are a few components of Finland's current education system structure and... March into this collection of weather lesson plans for primary grades and you... iPads For Education

8 Great TED Talks About The Future Of Education And Teaching These talks offer insights, concerns, and inspiration while discussing today’s educational practices and shortcomings, from a variety of perspectives. TED is a nonprofit devoted to “Ideas Worth Spreading”, bringing together people from three worlds: Technology, Entertainment, Design. If you’re not already a fan of TED, maybe these will open your eyes to this wonderful resource. Education is only one of the vast array of topics covered in TED talks, so if you enjoy any of the videos below, you might want to click through the the site and check out some more of them. Ken Robinson: Changing education paradigms This delightfully illustrated video entertains while educating. Sugata Mitra: The child-driven education This video discusses “The Hole In The Wall” experiment that Mitra started in New Delhi in 1999. Conrad Wolfram: Teaching kids real math with computers Math as it’s taught in classrooms rarely echoes math as it used in the real word. About Kelly Walsh Print This Post

Educational Technology Guy Every Teacher’s Must-Have Guide To Facebook You can’t swing a stick in social media without hitting something on Facebook . Same goes for education . You can’t talk about how technology is revolutionizing education without mentioning Facebook. It’s a simple service to figure out but what about once you become a regular user? If you’re a teacher, you would be well served by spending 3 minutes to read through this must-have guide. (We timed it out and it’s a bit under 3 minutes. Don’t start scrolling down just yet! Here’s how it works: there is a plethora of information on the Internet that can be useful for teachers but why search around when you can rely on EduDemic to do the digging for you. How To Set Up & Use Facebook We are big fans of Scribd and were excited to see that Bernadette Rego created this fantastic Facebook setup guide with a teacher-centric focus. A 10-Year-Old Explains How To Properly Use Facebook How Teachers SHOULD & SHOULDN’T Use Facebook Download this infographic in PDF form The Types of People To Avoid On Facebook

Eli Portnoy Debunks the Value of a Harvard MBA | Betabeat — News, gossip and intel from Silicon Alley 2.0. By Nitasha Tiku 7/14 2:31pm Share this: Venture capitalist Peter Thiel pushed the debate about whether a college education is worth the student debt past the tipping point–he’d rather pay smart kids $100,000-a-piece to build a start-up–but the argument has taken on a life of its own. Entrepreneurs have long romanticized the notion of a boot-strapped, self-taught success and held a healthy skepticism over whether a classroom can prepare you for the business world. But Eli Portnoy, a TechStars alum/Harvard MBA and CEO of ThinkNear, a location-based services start-up that helps merchants drive traffic to stores during down periods, takes an updated look at the current landscape. It’s no longer just a choice between going to college or venturing out on your own. If you know you want to start a company there is nothing more helpful than TechStars and I would strongly suggest going through the program ahead of an MBA. Sounds good in theory. by Taboolaby Taboola Sponsored ContentSponsored Content

39 Sites For Using iPads in the Classroom Pages Friday, October 7, 2011 39 Sites For Using iPads in the Classroom How Much Did Steve Jobs Change the World? 5 Great iPad Apps For Early Childhood Teachers10 iPad Apps Everyone Should Have- from PC Magazine10 Must Have iPad Apps for Students and Teachers10 Ways to Use iPads in Your Classroom40 iPad Apps Librarians Love40 Most Awesome iPad Apps for Science Students50+ iPad Apps By a Geography Teacher62 Interesting Ways to Use an iPad in the Classroom100 Incredibly Useful and Free iPad AppsBest Academic Reference Apps for the iPad- some $$, some freeA Day in the Life of the iPad ClassroomThe Debate Over iPads in EducationDigital Storytelling with the iPad ShareThisFacebookTweetLinkedInPinterestEmail Posted by Julie Greller at 7:24 AM Labels: ipads, ipads in the classroom, using ipads in the classroom 16 comments: MorganOctober 15, 2011 at 5:25 PMThanks for posting my blog on this site. Add comment Load more... Links to this post Create a Link Newer PostOlder PostHome LinkWithin AddToAny t

About Terra Nova Terra Nova is an interdisciplinary weblog about the intersection of society, simulation, and play. We have been posting since September of 2003. A uthors include scholars and practitioners from a variety of disciplines. Contacting us: Please contact one of the four founders below if you have any questions about Terra Nova. Guest authors: We are interested in recruiting new authors. History: You can find our full archives here , and our first month of posts here . Edward Castronova Professor of Telecommunications, Indiana University Julian Dibbell Author of My Tiny Life and Play Money Dan Hunter Professor of Law, New York Law School Greg Lastowka Professor of Law, Rutgers University School of Law-Camden