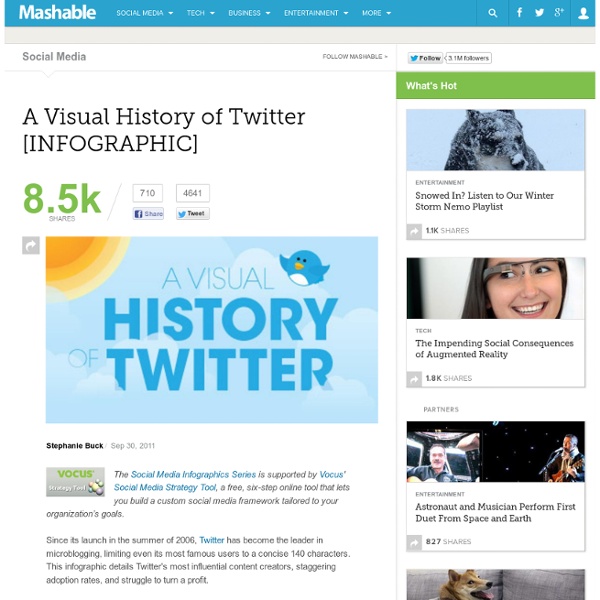 Twitter Etiquette: In A Little More Than 140 Characters Hello. My Name Is Jamie And I Am A Twitter Addict. I want to be upfront with you: I’ll admit it, I’m a bit of a Twitter snob. I’ll try my best to educate you and not bash you over the head with my snobbery, though. Retweeting 101: Mind Your R’s And T’s What is a retweet and how does it work? A retweet is a way to share a tweet by someone else that you find informative, humorous, or simply worthy of a share. There are two types of retweets — three if you count quoting a tweet as a retweet, but I don’t suggest doing that. The old style retweet is shown above. Then, Twitter implemented the “new retweet.” Merlin Mann's toot: You can see the new retweet button in the very center. Luckily, the new way of retweeting is fully implemented into most Twitter clients (Twitter for Mac), even mobile ones (e.g., Tweetbot, Twitter for iPhone). What’s the difference? If you retweet the “old way,” not only will you clog up the person’s mentions (old RTs show up in their @replies), but guess what?

Top Twitter Analytics Tools With hundreds of add-on tools, Twitter certainly has plenty of ways you can analyze its data. I set out to find the best tools that I would recommend for you to track and compare your own Tweets, as well as examine the growth of followers and when you actually send out your 140-character missives. My two faves are TweetStats and Twittercounter. As you are resting from your Thanksgiving feast, you might want to try them out, along with several others that I will show you. There are other tools that involve "sentiment analysis," being able to examine what people are Tweeting about or the attitude they are expressing in their tweets. The tools in this article are mainly for more quantifiable metrics. Some of these tools are dirt simple: you enter the Twitter ID or IDs of the appropriate people and wait for them to create their reports. The following tools are listed in the order of most to least useful, at least to my point of view. Twittercounter.

7 Ways Universities Are Using Facebook as a Marketing Tool Social media use by universities has become ubiquitous. When earlier this year, researchers from the University of Massachusetts at Dartmouth asked a representative sample of U.S. schools whether they use some social media, 100% of them said they did. Four years ago, just 61% of them said the same. Facebook is the most prevalent social media tool in higher education — 98% of the universities in the study said they had a presence there. "Prospective students, parents, current students, alumni — one common area in which they are all present in one way or another is on Facebook," says Kevin Morrow, the executive director of public affairs at Syracuse University. For this and other reasons, schools are pretty much unanimous in their use of Facebook. "The book hasn’t been written," says Michael Kaltenmark, director of web marketing and communications at Butler. Here are seven ways schools are leveraging Facebook. 1. 2. Butler's particularly photogenic mascot, Blue II, has his own Facebook Page.

Twitter Has 100 Million Active Users Twitter has 100 million active users logging in at least once a month and 50 million active users every day, CEO Dick Costolo revealed Thursday. The microblogging service has a total of 200 million registered users, but how many of those are actually regulars has been open to debate for some time. Costolo, in an informal chat with tech reporters he called his "state of the union," revealed that exactly half of them log in monthly — a number he says is up 82% since the beginning of the year. The CEO offered a whole raft of statistics to prove that Twitter is healthy and growing like a weed — especially on mobile platforms. Some 55 million users log on to Twitter from their phone or tablet every month. Less than 40% of users have not tweeted in the last month, according to the CEO, preferring to simply follow the timelines of others.

Again: Relevance, why Twitter? SmartBlogs Twitter has been a topic for educational bloggers for several years now. I believe that those educators using Twitter are drawn to those posts, while other educators, not using Twitter, are driven away. Maybe the problem is the emphasis or focus of the blog posts. I earned an advanced degree in educational technology over 30 years ago. In the distant past, teachers were able to maintain their relevance based on printed journals, newspapers and magazines. Educators need a better way to communicate about change in order to maintain their relevance. Too bad an application of social media like Twitter was developed for such a frivolous purpose. If only an educator with the highest of degrees would invent such a collaborative tool for educators to do all of the same collaboration with valuable education information. I must admit that this post comes from the frustration of listening to the many excuses from educators who choose not to use Twitter.