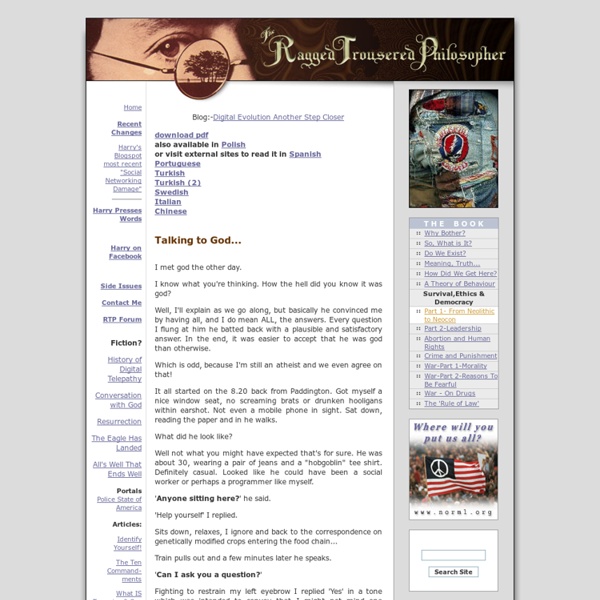 I met god the other day. I know what you're thinking. How the hell did you know it was god? Well, I'll explain as we go along, but basically he convinced me by having all, and I do mean ALL, the answers. Every question I flung at him he batted back with a plausible and satisfactory answer. In the end, it was easier to accept that he was god than otherwise. Which is odd, because I'm still an atheist and we even agree on that! It all started on the 8.20 back from Paddington. What did he look like? Well not what you might have expected that's for sure. 'Anyone sitting here?' 'Help yourself' I replied. Sits down, relaxes, I ignore and back to the correspondence on genetically modified crops entering the food chain... Train pulls out and a few minutes later he speaks. 'Can I ask you a question?' 'Why don't you believe in god?' The Bastard! I love this kind of conversation and can rabbit on for hours about the nonsense of theist beliefs. But then I thought 'Odd! 'And why should I believe that?' He did.

Meme selection Francis HEYLIGHEN CLEA, Free University of Brussels, Pleinlaan 2, B-1050 Brussels, Belgium E-mail: fheyligh@vub.ac.be, How to Design Culture: 16 Patterns to Build Adaptive Learning Organizations How do we form learning cultures in times of accelerating change? What tools and practices can self-organizing structures implement to become more agile and adaptive? I just received a copy of a new book by Dan Mezick called The Culture Game, which is all about answering the above inquiry. It touts itself as “the reference manual and toolbox for management “culture hackers,” those innovators and change-makers who are focused on creating a culture of learning inside their team…and the wider organization.” I’ve known Dan now for the better part of this year, and he’s been feeding me these tips, which are totally changing the ways I approach my own personal growth and development, as well as how I’m interacting with others. For me, the culture hacking movement really gets to the essence of how to build/become a learning organization and transform the future of work.

Foreknowledge and Free Will  Suppose it were known, by someone else, what you are going to choose to do tomorrow. Wouldn’t that entail that tomorrow you must do what it was known in advance that you would do? In spite of your deliberating and planning, in the end, all is futile: you must choose exactly as it was earlier known that you would. Letters From Strangers: 8/8/10 - StumbleUpon Transcription:"My Dearest Stranger, People wait lifetimes and pay thousands for a chance like this. A chance to pour their heart out to someone without fear of judgement.

Future and Cosmos: “Vacuum Catastrophe” Should Be Called the Vacuum Miracle We tend to think of science as something that gives us the right answers. Almost always science does give us the right answer. But there is at least one case when science gives us the wrong answer – a really, really wrong answer. In fact, there is one case in which science gives us an answer wronger than any answer that you ever gave in school, even on those tests when you wrote wild guesses on your exam sheet because you had daydreamed through every class session.

#5 Universe Ring To22 created something nearly perfect. A continuous ring, delicately proportioned, beautifully polished and seemingly flawless. There is only one tiny imperfection. A speck, no larger than a piece of dust. At a glance, it is barely noticeable. The Fusion Centers' Spying Operation against the Occupy Movement and Peaceful Protest By Mara Verheyden-Hilliard and Carl Messineoof the Partnership for Civil Justice Fund This report, based on documents obtained by the Partnership for Civil Justice Fund, provides highlights and analysis of how the Department of Homeland Security (DHS)-funded Fusion Centers used their vast anti-terrorism and anti-crime authority and funds to conduct a sprawling, nationwide and hour-by-hour surveillance effort that targeted even the smallest activity of peaceful protestors in the Occupy Movement in the Fall and Winter of 2011. It is being released in conjunction with a major story in the New York Times that is based on the 4,000 pages of government documents uncovered by the Partnership for Civil Justice Fund (PCJF) during a two-year long investigation. Until now the role of the Fusion Centers in their application of anti-terrorism authority and resources has been shrouded in secrecy. These documents show that the Fusion Centers constitute a menace to democracy.

Practical Wisdom: The Right Way to Do the Right Thing We Americans are growing increasingly disenchanted with the institutions on which we depend. We can't trust them. They disappoint us. The Complexity of the Creative Personality Researcher Mihaly Csikszentmihalyi includes in his books and other writings descriptions of the diversity and multiple characteristics of creative people. In a post of hers, Juliet Bruce, Ph.D. notes that Mihaly Csikszentmihalyi (pronounced me-high chick-sent-me-high-ee) wrote, “If there is one word that makes creative people different from others, it is the word complexity. Instead of being an individual, they are a multitude.” “Like the color white that includes all colors, they tend to bring together the entire range of human possibilities within themselves. Creativity allows for paradox, light, shadow, inconsistency, even chaos – and creative people experience both extremes with equal intensity.”

Are you referring to the section that says flying machines are the first level? As far as who made the "original" universe, it doesnt explicitly say one way or the other, but it does say that the creator of this universe came from a natural process of evolution, much like we are under going, and that this universe is his universe. I would then have to say that it is describing a cyclical universe in which the universe wakes up, realizes what/who it is, and then out of boredom or some other reason, causes it to happen all over again, but only differently. by docein Aug 29

it is more likely that the on set of sentimentality be the "first level". and who made the original universe then? by default Aug 21