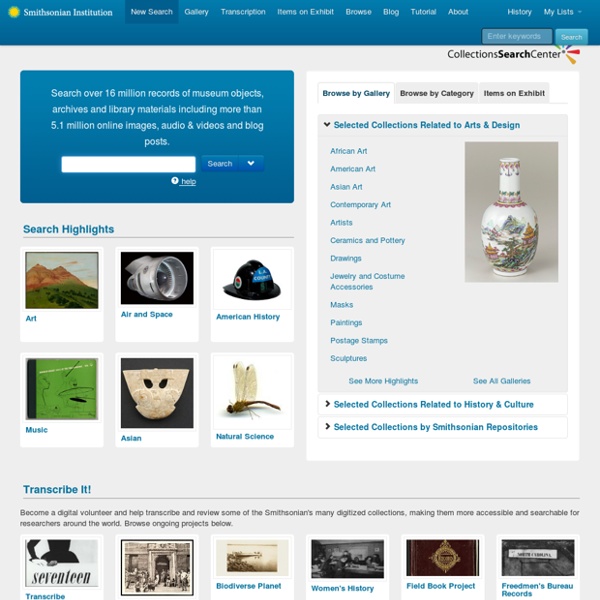 Partners The Museum of Online Museums (MoOM) Exceptional exhibits are highlighted each quarter. Selections from previous seasons are archived here. Please consider joining our MoOM Board of Directors won't you? You'll receive some nice swag and can lord it over your less civic-minded friends. While even the most daring critic would find it difficult to describe computer viruses as "art," there's a certain bizarre artistry mixed among the prankster-ism and the outright cruelty of their creators.

Millions of historic images posted to Flickr by Robert Miller, Global Director of Books, Internet Archive “Reading a book from the inside out!”. Well not quite, but a new way to read our eBooks has just been launched. Check out this great BBC article: Here is the fabulous Flickr commons collection: 50 Awesome Search Engines Every Librarian Should Know About by Staff Writers Students, teachers and the public turn to their librarians for help researching everything from technology to genealogy to homework help and lesson plans. Even if your library is equipped with subscriptions and memberships to top of the line databases and online journals, you’ve probably had to get creative during a patron’s requested search for something unfamiliar. Next time, though, you can turn to one of these 50 search engines, designed to pull from the Web only the information you really need. Meta Search and Multi Search Engines

Public Domain Collections: Free to Share & Reuse That means everyone has the freedom to enjoy and reuse these materials in almost limitless ways. The Library now makes it possible to download such items in the highest resolution available directly from the Digital Collections website. Search Digital Collections No permission required. The Eye of the Storm: 21:12:2016 - The Closing of the Galactic Alignment - The Soul Matrix For the past thirty-six years, humanity has been moving through the eye of the needle of a rare cosmic phenomenon which occurs only once every 26,000 years and is known as ‘The Galactic Alignment Zone’. This began in 1975 and concludes in 2021. The thirty-six year window of time referred to as The Galactic Alignment formed its epicentre. This eye of the storm phase began on the Winter Solstice of 1980 and draws to a close on December 21, 2016. Its purpose has been to catalyse an unprecedented spiritual awakening and an unparalleled acceleration of the evolution of consciousness. As one might imagine, the lows of this roller-coaster ride have brought us to our knees, yet the highs have enabled us to soar to new dimensions that were simply beyond our comprehension pre-1980.

A Selection from The MET’s Public Domain Collection, Now Free from All Restrictions Ever since The Public Domain Review began we’ve long harboured fantasies about the Metropolitan Museum joining the growing ranks of those institutions (The Getty, New York Public Library, and Rijksmuseum, among others) who have opened up their digital copies of public domain works, making them free from all restrictions on use. Now, after a statement made last week, The MET have done just that — making all digital copies of their incredible public domain collection available under a CC0 license and in high resolution. While included in the vast lot of more than 200,000 images is a wonderful selection of the well known — Van Gogh, Rembrandt, Monet, etc. — we present here our highlights from the perhaps lesser known corners (though we couldn’t resist sneaking in a Paul Klee).

Every line becomes a circle line: a new way to see the tube map There have been quite a few variations of the iconic London Underground map in the past but Dr Max Roberts has now created a design based on concentric circles. In his guest blog on the Going Underground blog, Dr Roberts writes: ""With the new orbital loop surrounding Central London, some people are suggesting a mapping approach based on circles to emphasise this feature. There is nothing new here, and Berlin, Paris, Moscow and Madrid have all received this treatment in the past. Grounding a map in familiar shapes such as circles can make it easy to comprehend." However he does also state that it is possible to "push a design priority too far". Explore the map above by clicking on the image to see a full screen version and read Dr Robert's guest post on the Going Underground blog for more detail on the map design.

Paper and Pencil Space Combat Game I played this with my classmates in Grade 6, circa 1982-83. Presumably it was inspired by arcade games such as Space War and Asteroids! I have no idea who invented it. I have attempted to formalize the rules as I remember them, in an attempt to find out if other people have played this game. And to inspire a new generation of players! Basic Rules