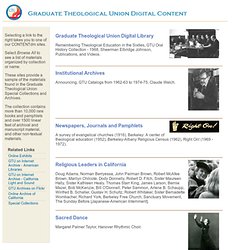 Institutional Archives Announcing, GTU Catalogs from 1962-63 to 1974-75, Claude Welch. Newspapers, Journals and Pamphlets A survey of evangelical churches (1916), Berkeley: A center of theological education (1952), Berkeley-Albany Religious Census (1962), Right On! Institutional Archives. Graduate Theological Union - Newspapers, Journals and Pamphlets. Religious Leaders of California. Sacred Dance. Info. Use of the Archives Collections in the GTU Archives are open to researchers whether faculty, student, or interested individual unless any restrictions are placed by the donor or the GTU Administration to protect privacy or confidentiality. 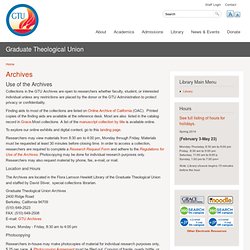 Finding aids to most of the collections are listed on Online Archive of California (OAC). Printed copies of the finding aids are available at the reference desk. Most are also listed in the catalog record in Grace.Most collections A list of the manuscript collection by title is available online. To explore our online exhibits and digital content, go to this landing page.

Researchers may view materials from 8:30 am to 4:00 pm, Monday through Friday. Notes from the Archives. Finding Aids. GTU Online Exhibits. Elsie Thomas Culver: Overseas Relief After World War II. Elsie Thomas Culver, a publicist for church relief services in New York City, packed her camera, hopped on a troop ship to England and then traveled through Europe on a fact finding mission in late 1945. 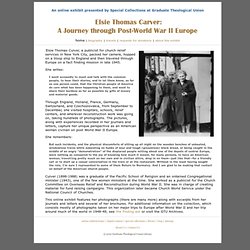 She writes: I went avowedly to meet and talk with the common people, to hear their stories, and to let them know, so far as one person could, that the Christian people of America do care what has been happening to them, and want to share their burdens as far as possible by gifts of money and material goods. King James Bible Exhibit. Graduate Theological Union: Art Exhibits in the Library. Douglas G. Adams Collection: Introduction. Douglas G. 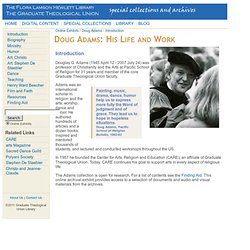 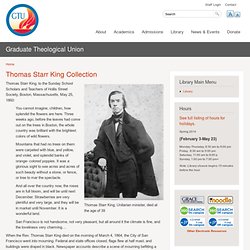 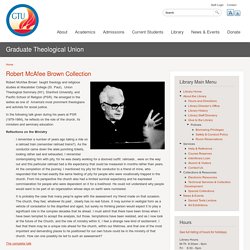 Paul), Union Theological Seminary (NY), Stanford University, and Pacific School of Religion (PSR). He emerged in the sixties as one of America's most prominent theologians and activists for social justice. In the following talk given during his years at PSR (1979-1984), he reflects on the role of the church, its ministers and seminary education. Reflections on the Ministry I remember a number of years ago taking a ride on a railroad train (remember railroad trains?). It is probably the case that many peop1e agree with the assessment my friend made on that occasion. The complete talk An exhibit celebrating his life was on display in the library from October 1, 2010 to January 15, 2011. 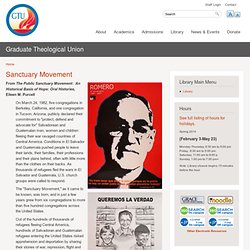 Purcell On March 24, 1982, five congregations in Berkeley, California, and one congregation in Tucson, Arizona, publicly declared their commitment to "protect, defend and advocate for" Salvadorean and Guatemalan men, women and children fleeing their war ravaged countries of Central America. Conditions in El Salvador and Guatemala pushed people to leave their lands, their families, their professions and their plans behind, often with little more than the clothes on their backs. As thousands of refugees fled the wars in El Salvador and Guatemala, U.S. church groups were called to respond.

The "Sanctuary Movement," as it came to be known, was born, and in just a few years grew from six congregations to more than five hundred congregations across the United States. Anne McGrew Bennett. Day of "Civil Obedience" 1970 I, Anne M. 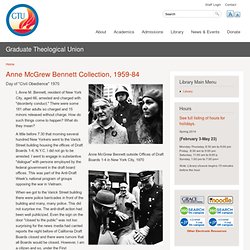 Bennett, resident of New York City, aged 66, arrested and charged with "disorderly conduct. " There were some 181 other adults so charged and 15 minors released without charge. How do such things come to happen? The Elsie Thomas Culver Collection. The Center for Women and Religion Collection. Frankl Collection and Logotherapy ? Graduate Theological Union. The Viktor E.

Frankl Collection The GTU archives has one of the most important collections of Viktor Frankl and Logotherapy materials in the United States. Dr. Viktor E. New Religious Movements — Graduate Theological Union. California has historically been a center for the development and practice of non-traditional or alternative religious movements. 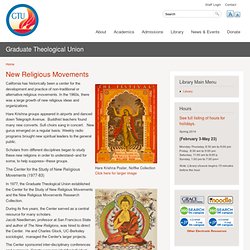 In the 1960s, there was a large growth of new religious ideas and organizations. Hare Krishna groups appeared in airports and danced down Telegraph Avenue. Buddhist teachers found many new converts. Sufi choirs sang in concert.