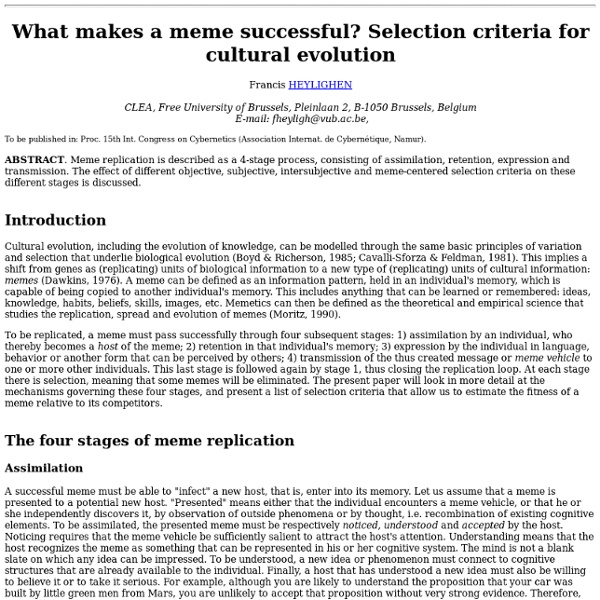 Francis HEYLIGHEN CLEA, Free University of Brussels, Pleinlaan 2, B-1050 Brussels, Belgium E-mail: fheyligh@vub.ac.be, To be published in: Proc. 15th Int. Congress on Cybernetics (Association Internat. de Cybernétique, Namur). ABSTRACT. Introduction Cultural evolution, including the evolution of knowledge, can be modelled through the same basic principles of variation and selection that underlie biological evolution (Boyd & Richerson, 1985; Cavalli-Sforza & Feldman, 1981). To be replicated, a meme must pass successfully through four subsequent stages: 1) assimilation by an individual, who thereby becomes a host of the meme; 2) retention in that individual's memory; 3) expression by the individual in language, behavior or another form that can be perceived by others; 4) transmission of the thus created message or meme vehicle to one or more other individuals. The four stages of meme replication Assimilation Retention Expression Transmission Meme fitness F(m) = A(m) . Objective Criteria Conclusion Related:  Resources and Other Collections

The curse of the herd I confess I'm biased . I get very irritated by mindless conformity , even about silly, inconsequential things. I find it exasperating, for instance, when people can’t decide for themselves if a song is beautiful or a person attractive. But perhaps I’m affected more than I know. There’s reason to think that we are designed to conform, that our ancestors evolved a sensitivity to social cues and a tendency to adopt group norms. Sometimes the majority’s got practical information to share – information that is objectively helpful, like how to catch a fish or prevent infection. In other cases, group norms are arbitrary, but useful when everyone agrees on them. There is also the sort of conformity that exists for purely social reasons. I understand why such social conformity is important. Sample stimulus from Asch experiment In a famous experimental paradigm created by Solomon Asch, people are asked to judge which among a series of lines are the same length. What does it mean? More reading

Talking With God I met god the other day. I know what you're thinking. How the hell did you know it was god? Well, I'll explain as we go along, but basically he convinced me by having all, and I do mean ALL, the answers. Which is odd, because I'm still an atheist and we even agree on that! It all started on the 8.20 back from Paddington. What did he look like? Well not what you might have expected that's for sure. 'Anyone sitting here?' 'Help yourself' I replied. Sits down, relaxes, I ignore and back to the correspondence on genetically modified crops entering the food chain... Train pulls out and a few minutes later he speaks. 'Can I ask you a question?' Fighting to restrain my left eyebrow I replied 'Yes' in a tone which was intended to convey that I might not mind one question, and possibly a supplementary, but I really wasn't in the mood for a conversation. 'Why don't you believe in god?' The Bastard! I love this kind of conversation and can rabbit on for hours about the nonsense of theist beliefs. 'Stottle.

Machine Elves 101, or Why Terence McKenna Matters If anyone ever wanted to get to know me (i.e., what makes Daniel tick) the first thing I would have to tell them is, "Read Terence McKenna." In online forums and real life scenarios alike, I quote McKenna like Jules Winnfield quotes Ezekiel in Pulp Fiction. Passionate. A few weeks ago my friend Michelle suggested I write a "Terence for Dummies" piece. The Background Terence Kemp McKenna (November 16, 1946 -- April 3, 2000) was born under the auspices of a conventional upbringing. Settling on the outskirts of the Mission at La Chorrera, it was the events that transpired during this crusade that became the catalyst of McKenna's ideas. The Experiment It was here that Terence and his party became acquainted with Stropharia cubensis fungi (now known as Psilocybe cubensis). In essence, you can change reality while tripping on shrooms. The bread crumbs leading the McKenna brothers to this perspective was in fact the shamanic method. The Result Time stopped, became tangible. The Revival The Elves

#5 Universe Ring To22 created something nearly perfect. A continuous ring, delicately proportioned, beautifully polished and seemingly flawless. There is only one tiny imperfection. Only magnification reveals the actual object set within the miniature interior. It is a model of the known universe. Now you may be asking yourself; how does that little vortex-looking spiral thingie represent the Universe? The Collaboration Kings To22 is a joint design collaborative with the aim of provoking new ways of thinking. Designer Todd Bracher lives and works in London; designer/filmmaker Efe Buluc resides in Istanbul; and designer Mark Goetz is based in New York City. Contact: (212) 989-7607 info@to22.net check out their site for more projects and design concepts. To make a martini you will need a glass, gin, some dry vermouth, and, of course, an olive. We have all broken something by accident. If you enjoyed this post, the Sifter highly recommends:

The EGG Story by Roger Nelson, early 2002 Someday after mastering winds, waves, tides and gravity, we shall harness the energies of love, and then, for the second time in the history of the world, man will discover fire. — Teilhard de Chardin1 Part 1: History and Connections There are times when we share with others a special, fully interconnected consciousness. The research described here points to subtle indications that we do live in an interconnected, potentially conscious world, in which we surely play an important role. The Global Consciousness Project An international collaboration of researchers interested in the extraordinary potentials of consciousness is responsible for an experimental project that is asking whether some faint glimmering of a coherent global consciousness can be observed. The project emerges out of scientific efforts to study direct effects of consciousness on physical systems.3 The possibility that mind can be instrumental in the world is an idea with a turbulent history.

Trump’s Fake War on the Fake News Seven days before Donald Trump took office, the inauguration festivities got off to a low-key start inside a modest conference room at the Capitol Hill offices of the American Trucking Associations. There, a hundred-odd familiar faces from the Washington set gathered to fête one of their own, incoming White House press secretary Sean Spicer. The party spilled out into the hallway as entrepreneur Susanna Quinn, ubiquitous Republican consultant Ron Bonjean and Spicer’s wife, Rebecca, a staffer at the National Beer Wholesalers Association, rubbed shoulders with CBS’ White House correspondent Major Garrett and its political editor Steve Chaggaris, Time’s Zeke Miller and several journalists from CNN, including Washington bureau chief Sam Feist. Spicer arrived late, but in good spirits, and after 20 minutes of schmoozing he strode to the front of the room to deliver brief remarks. Story Continued Below In public, Trump’s team and the press had been engaged in bitter clashes for months.

Metagifted Education Resource Organization: Home What Are Indigo and Crystal Children and Adults Spanish/Espanol How do you know if you, or someone you know, is an Indigo or Crystal Child or Adult? We will describe the main features and characteristics of these people. The Indigo Children have been incarnating on the Earth for the last 100 years. The Crystal Children began to appear on the planet from about 2000, although some date them slightly earlier. The Indigo and Crystal Adults are composed of two groups. The following extract describes the difference between Indigo and Crystal Children. The first thing most people notice about Crystal Children is their eyes, large, penetrating, and wise beyond their years. The older children (approximately age 7 through 25), called "indigo Children", share some characteristics with the Crystal Children. Those adults who resist change and who value conformity may misunderstand the Indigos. The terms "Indigo" and "Crystal" were given to these two generations because they most accurately describe their aura colours and energy patterns.

Daniel Jacob Channelings by Daniel Jacob The newspapers and magazines have nicknamed them "Generation X." The television commentators have called them "hard to read, even harder to understand." These are the offspring of that incredible genetic explosion of angst and wonder, the Baby Boomers. It has been predicted (by several) that, on or near December 22, 2012, all time (as we know it) will stop. There are no new souls being born into this universe. Since about 1973, there are no children anymore. Ask a "Star Child" what she wants to be when she grows up. Star Children grow up doing their math homework while watching TV and listening to a walkman at the same time. The brain of a Star Child is a multi-track device. The two hemispheres of the old brain are plugged into many polarity configurations. When the tourniquet is released, and they eventually let go of that compliance, the "other side of the brain" will become a unified OneMind. Those personality-types that have been called "A.D.D."

Characteristics Of Indigo Children/Adults Your rating: None Average: 5 (3 votes) I've recently been told by my guides to focus my work on helping Indigo's find their way to the light. This includes helping Indigo's identify who they are and then help them develop their gifts. I think the thing that strikes me is that most is that Indigos do not know they are Indigos nor do they understand, or maybe have never labeled, their abilities. An important aspect of whether or not Indigos struggle is the exposure to metaphysics in their life growing up. It seems that if the family environment or culture does not allow for such a discussion or experience great pain and personal misunderstanding can occur. Indigo Children are, many are no longer children, those who contain a soul that has evolved over many lifetimes to become of a higher state. Question authority. Very sensitive. Depression is common. Clear Sight. Do not do well in systems. High School is difficult for Indigos. Feeling alien. Patience is not an Indigo virtue. Author's Bio:

The Empath, The Indigo, The Crystal, & The Rainbow (And Quizzes) In this discussion, we will be looking at some definitions and traits of the ideas of the Empath, the Indigo, the Crystal, and the Rainbow. So, as always, lets start with some basic definitions and the move on to a more detailed look at each in their traits and/or attributes. I've also added in some Quizzes to test your aura and to tell if you are one of these types. Definitions An Empath is a person who has an acute or highly developed sense of empathy. An Indigo Child is a powerful, intelligent, independent child, named for his/her supposedly indigo aura, who will help improve the spiritual quality of the world. Crystal People instinctively channel healing energy. Rainbow Children can use their strong will and unlimited energy to build the new world A Rainbow Child is the next wave of children after the Crystal Children and Adult Indigo Children here to assist us with the next stage of our accession. The Quizzes The Aura Test Mind, Body & Spirit Assessment Are You An Indigo Child?

Octarine: The Imaginary Color of Magic by COLOURlovers "Octarine" is a color name coined by Terry Pratchett in his Discworld novels. Octarine is said to be the color of magic, as it is apparent in the crackling and shimmering of light. The word refers to the "eighth color," in a spectrum of black, blue, green, yellow, purple, orange, and red. Octarine has been likened to a fluorescent greenish-yellow purple, a combination impossible to perceive with normal human eyes. Imagine, if you can, the marriage of these two swatches: Scholar of magic Pete Carroll says he imagines Octarine to be "a particular shade of electric pinkish-purple," a common color in optical illusions. There can be no doubt that octarine is an imaginary color. Their conclusion, however, is negatory: "Look at the way the spectrum forms a closed circle. The COLOURlovers library shimmers with magical colors, though as of this writing there's no color named "octarine." Cover by Perla. Are you inspired by the colors found here?

Related:
Related:  Resources and Other Collections