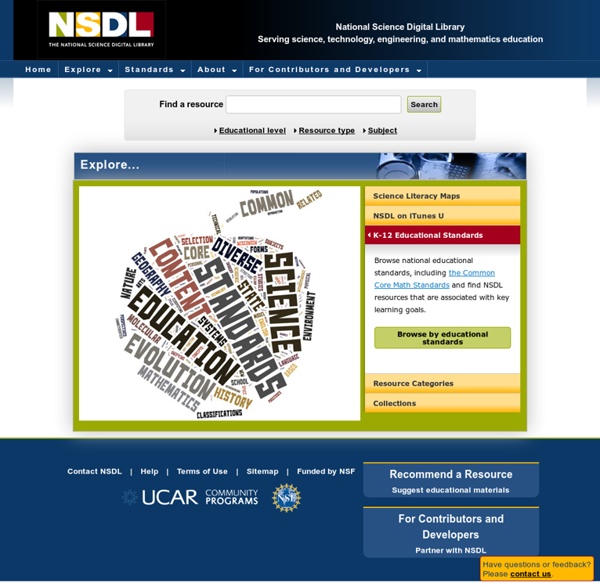 NSDL Science Literacy Maps help teachers connect concepts, standards, and NSDL educational resources by providing a way to see and discover how scientific concepts relate to one another. View the NSDL Science Literacy Maps NSDL provides access to audio, video, and other multimedia resources for science and math education through Apple's iTunes Store. There is no cost to use or download materials from NSDL on iTunes U. View NSDL on iTunes U View the distribution of NSDL resources in graphical form and browse by education level, resource type, subject, and audience.

Some Fundamentals of Mineralogy and Geochemistry This website makes available some one-page explanations of fundamental ideas in mineralogy and geochemistry. The individual documents are designed as stand-alone explanations or illustrations, and they can be used as course handouts or as Powerpoint illustrations. Virtually all of the individual documents provided here involve graphic presentations or explanations of ideas that are intended to make concepts more accessible to students. The principle driving this work is that things are best understood when seen in their broadest possible context.

The Differentiator Try Respondo! → ← Back to Byrdseed.com The Differentiator Prints, Drawings & Watercolors from the Anne S. K. Brown Military Collection This ambitious multi-year endeavor will digitize the 15,000 individual prints, drawings, and watercolors from The Anne S. K. Brown Military Collection. The artwork vividly documents all aspects of military and naval history, with emphasis on the history and illustration of world military and naval uniforms from the 17th century to the present. In addition to the material on military and naval dress, this digital collection includes portraiture, caricatures, wartime posters, original photographs, and graphics on military and naval history in general, campaigns and battles, the arts and tactics of warfare, drills and regulations.

Create A Graph Graphs and charts are great because they communicate information visually. For this reason, graphs are often used in newspapers, magazines and businesses around the world. NCES constantly uses graphs and charts in our publications and on the web.

The Best Websites to Learn How to Write Code The best tutorials and websites where you can learn how to write code in PHP, JavaScript, HTML, CSS, Python and all the other popular programming languages. The Learn to Code movement has picked up momentum worldwide and that is actually a good thing as even basic programming skills can have a major impact. If you can teach yourself how to write code, you gain a competitive edge over your peers, you can think more algorithmically and thus can tackle problems more efficiently.

SILENT T - The Creative Portfolio of Margot Trudell With this project I wanted to communicate to people what we've managed to accomplish in space exploration in simple terms; I found that many people don't know much about the subject because of how it's typically communicated, with scientific and technical jargon. Through the use of infographics that simply and clearly illustrated a lot of information, people could easily take a brief look at one infographic and even without looking closer grasp that we've managed to send a lot of things and people to the moon for example, and looking closer they could see that China has plans for a manned lunar mission within the next few years, for example. This simple and easy to understand approach is meant to encourage people to look into the field more, and the OMG SPACE name is meant to encourage excitement about space exploration, especially amongst younger people. There is also a website associated with this project, omgspace.net. OMG SPACE comes in two parts: infographics and a website.

Inspirational Quotes to Live By Good quotes are often powerful words of wisdom that inspire, educate and even motivate a person to take action. They usually share common themes such as: Positive thinking leads to positive outcomesFailure is a stepping stone to successHelp yourself by helping othersDetermination, initiative and persistence are the foundation of success And yet these lessons of life are typically condensed into 1-2 lines. Therefore we thought it’d be a great idea to come up with the ultimate list of 100 inspiring quotes to live by. 1.

Thanks OhioMath! I didn't realize there was CCSS resources here too. by ohioscience Aug 8