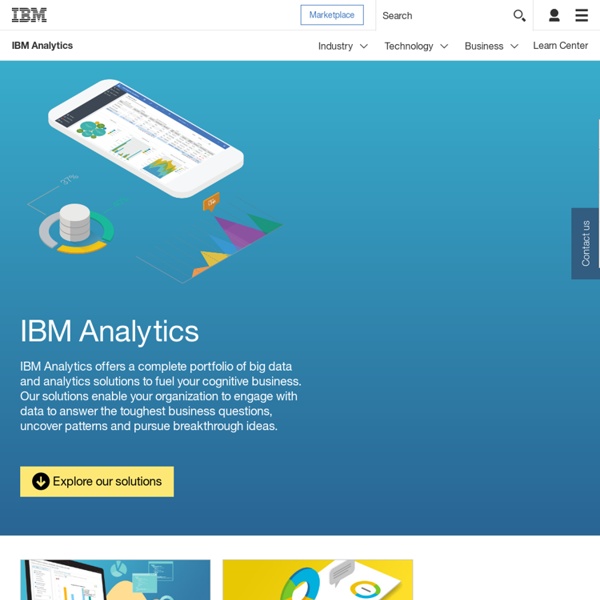 Digitizing the delivery of government services An agile development approach was critical in a European agency’s launch of a new online system for registering businesses. Here’s how the agency moved from paper to pixels. Government agencies around the world are under internal and external pressure to become more efficient by incorporating digital technologies and processes into their day-to-day operations. For a lot of public-sector organizations, however, the digital transformation has been bumpy. In many cases, agencies are trying to streamline and automate workflows and processes using antiquated systems-development approaches.

Vintage data visualization: 35 examples from before the Digital Era This is a guest post by Tiago Veloso, the founder of Visual Loop, a collaborative digital environment for everything related to information design and data visualization. He lives in Brazil, and you can connect with him online on Twitter and LinkedIn. If you follow us regularly on Visual Loop, you’ve probably noticed we like to featured not only modern interactive visualizations and infographics, but also examples from the past, from the time when there were no computer softwares to help analyzing and designing and no Internet to access and share data. Graphics, charts, diagrams and visual data representations have been published on books, newspapers and magazines since they exist, not to mention old maps and scientific illustrations, and despite the lack of tools such as the ones we have at our disposal nowadays, they are as inspiring and important as the best contemporary visualizations. A Map of Physics (1939) (A 1939 Map of Physics)

OpenStreetMap Where am I? Welcome to OpenStreetMap! OpenStreetMap is a map of the world, created by people like you and free to use under an open license. Parallel Sets Parallel Sets (ParSets) is a visualization application for categorical data, like census and survey data, inventory, and many other kinds of data that can be summed up in a cross-tabulation. ParSets provide a simple, interactive way to explore and analyze such data. Even though the screenshots here show the Mac version, the program also runs on Windows and Linux. Links to the executables are in the Download Section. Basic Operation Desktop This software has been renamed to Gapminder World Offline Because of technical problems the software on this page is no longer being maintained! Please visit Gapminder World Offline (Beta) instead. Gapminder Desktop

Tackling the Challenges of Big Data This is an Archived Course EdX keeps courses open for enrollment after they end to allow learners to explore content and continue learning. All features and materials may not be all available. Data Visualization: Top 20 Amazing Tools It’s often said that data is the new world currency, and the web is the exchange bureau through which it’s traded. As consumers, we’re positively swimming in data; it’s everywhere from food labels to World Health Organisation reports. As a result, for the designer it’s becoming increasingly difficult to present data in a way that stands out from the mass of competing data streams. MR5RZMKG9XBF One of the best ways to get your message across is to use a visualisation to quickly draw attention to the key messages, and by presenting data visually it’s also possible to uncover surprising patterns and observations that wouldn’t be apparent from looking at stats alone.

Understand on-premises data gateways for Microsoft PowerApps Installation and configuration Prerequisites Minimum: .NET 4.5 Framework 64-bit version of Windows 7 or Windows Server 2008 R2 (or later) Recommended: 8 Core CPU 8 GB Memory 64-bit version of Windows 2012 R2 (or later) Data visualisation DIY: our top tools What data visualisation tools are out there on the web that are easy to use - and free? Here on the Datablog and Datastore we try to do as much as possible using the internet's powerful free options. That may sound a little disingenuous, in that we obviously have access to the Guardian's amazing Graphics and interactive teams for those pieces where we have a little more time - such as this map of public spending (created using Adobe Illustrator) or this Twitter riots interactive. But for our day-to-day work, we often use tools that anyone can - and create graphics that anyone else can too. So, what do we use?

Venn Templates and Venn Diagram Software - Free and no download required with Gliffy Online A Venn diagram is a simple way to represent the relationships between groups of things with a clear, visual display. Let your ideas overlap In a Venn diagram, large circles represent groups of things with a shared attribute. Areas where these circles overlap represent individuals that belong equally to both groups. For example, a Venn diagram with one circle representing things made with yeast and another representing alcoholic beverages would have an overlapping zone where you could find both beer and wine.