Building Ana the insurance Chatbot, with Watson Conversation and Bluemix - Part 3 of 3 - Bluemix Blog. This is the third and final part of a series, which describes the design and implementation approach used to build a Watson Convers ation data integrated Chatbot with Bluemix. 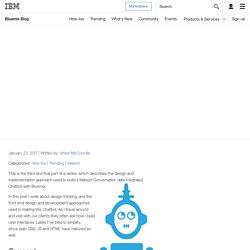 In this post I write about design thinking, and the front end design and development approaches used in making this Chatbot. As I travel around and visit with our clients they often ask how I build user interfaces. The Weather Channel App: You Can Now Receive Alerts Without a Cell Connection – TedxTech. IBM gives out-of-office patent to public. Building a blockchain for business with the Hyperledger Project. Australia #censusfail: Derision greets simple fix failure. Image copyright Twitter It is the familiar refrain of IT workers across the globe: "Have you switched it off and on again? 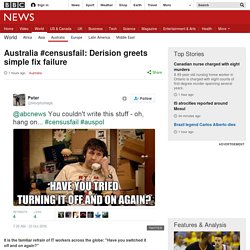 " But few expected it to be the answer to avoiding to a system failure which stopped millions of Australians completing August's national census. That is, until IBM's chief engineer admitted switching the router off and on again would have prevented the 40-hour outage from ever happening. The revelation has caused disbelief - and hilarity. The Australian government had touted the census website as the future, seeking to impress voters with its cybersecurity credentials and plans to trial online elections. It ended in embarrassment - and a host of memes - after it had to be taken offline for almost two days after suffering a "malicious" cyber-attack on 9 August. IBM Watson Developer Cloud. IBM Launches Cloud Services for Blockchain Deployments. Australia's #CensusFail blamed on IBM's 'inadequate' planning. Australian Prime Minister Malcolm Turnbull is taking IBM to task for the widespread website outage that crippled the country's first attempt at an online census. 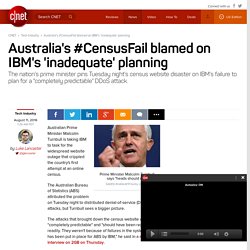 The Australian Bureau of Statistics (ABS) attributed the problem on Tuesday night to distributed denial-of-service (DDoS) attacks, but Turnbull sees a bigger picture. The attacks that brought down the census website were "completely predictable" and "should have been repelled readily. They weren't because of failures in the system that has been put in place for ABS by IBM," he said in a radio interview on 2GB on Thursday. The US-based tech company was awarded a AU$9.6 million dollar contract in 2014 to develop and support the online platform for the 2016 Census, rather than the bureau handling the task in-house. QUT students build $500 Australian census server better than IBM. Loaded: 0% Progress: 0% Head of census 2016 says the ABS is not considering any backup plan amid fears of a low participation rate. 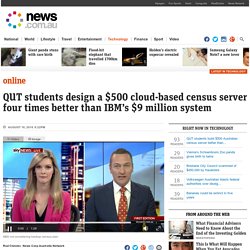 QUT students Bernd Hartzer and Austin Wilshire build a better 2016 Census server that is four times better than the $9 million server that the ABS use from IBM for the disastrous 2016 Census. IBM's Watson won Jeopardy, but can it win business from banks? Bitcoin's technology has a surprising fan: IBM. Bitcoin has a bad rap as the preferred currency of drug dealers. 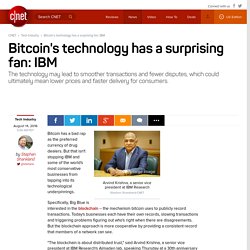 But that isn't stopping IBM and some of the world's most conservative businesses from tapping into its technological underpinnings. Specifically, Big Blue is interested in the blockchain -- the mechanism bitcoin uses to publicly record transactions. IBM Graph - IBM Cloud Data Services- IBM Analytics. IBM Hired Hundreds of Designers to Figure Out What Customers Want. A few months ago, senior executives at Vodafone's Irish division sat down with a 16-year-old boy to ask him about his daily routine and, specifically, how he uses his smartphone. 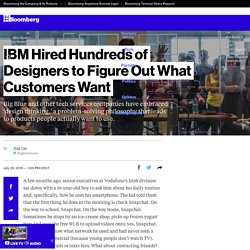 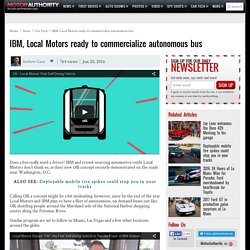 IBM and crowd-sourcing automotive outfit Local Motors don't think so, as their new Olli concept recently demonstrated on the roads near Washington, D.C. ALSO SEE: Deployable mobile tire spikes could stop you in your tracks Calling Olli a concept might be a bit misleading, however, since by the end of the year Local Motors and IBM plan to have a fleet of autonomous, on demand buses just like Olli shuttling people around the Maryland side of the National Harbor shopping center along the Potomac River. Similar program are set to follow in Miami, Las Vegas and a few other locations around the globe. What's most unique about Olli isn't that it is an autonomous vehicle without a driver, it is the way that passengers will be able to hop aboard and tell the vehicle their intended destination.

IBM and Cisco ink IoT deal integrating Watson AI into Cisco edge routers. IBM has been giving a push both to its Watson artificial intelligence and Internet of Things businesses as part of its bigger strategy to grow new streams of revenue to offset declines in older ones. 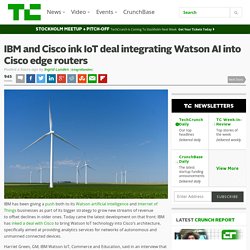 Today came the latest development on that front: IBM has inked a deal with Cisco to bring Watson IoT technology into Cisco’s architecture, specifically aimed at providing analytics services for networks of autonomous and unmanned connected devices. Harriet Green, GM, IBM Watson IoT, Commerce and Education, said in an interview that there are no direct financial deals between the two companies or targets for how much they plan to invest on working together.

Rather, sales teams at each will work to bring in new IoT business that will hopefully also result in a business bump for the other. (Early customers for the service include Bell Canada, the Port of Cartagena, and Silverhook Powerboats, all of whom were already working with both before this new service, Green told me.) IBM Watson Pizza engagement digital assistant demo. IBM Big Data and Analytics at work in Banking. Artificially Intelligent Lawyer “Ross” Has Been Hired By Its First Official Law Firm. In Brief Ross, the world's first artificially intelligent attorney, has its first official law firm. 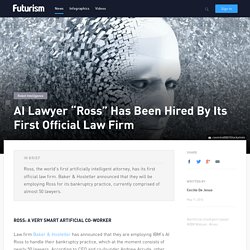 Baker & Hostetler announced that they will be employing Ross for its bankruptcy practice, currently comprised of almost 50 lawyers. Ross: A Very Smart Artificial Co-worker Law firm Baker & Hostetler has announced that they are employing IBM’s AI Ross to handle their bankruptcy practice, which at the moment consists of nearly 50 lawyers. According to CEO and co-founder Andrew Arruda, other firms have also signed licenses with Ross, and they will also be making announcements shortly. Ross, “the world’s first artificially intelligent attorney” built on IBM’s cognitive computer Watson, was designed to read and understand language, postulate hypotheses when asked questions, research, and then generate responses (along with references and citations) to back up its conclusions. The Legal Industry Enhanced. IBM allow free access to quantum processor online.

Image copyright IBM IBM has made a functioning quantum processor available to the public over the internet. 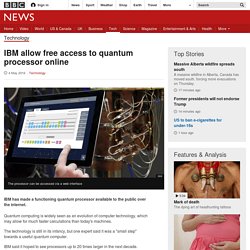 Quantum computing is widely seen as an evolution of computer technology, which may allow for much faster calculations than today's machines. The technology is still in its infancy, but one expert said it was a "small step" towards a useful quantum computer. IBM said it hoped to see processors up to 20 times larger in the next decade. Traditional computers process all their information using bits - information stored in tiny transistors that can either be on or off - interpreted as values of one and zero.

Quantum computing instead takes advantage of a mechanic called superpositioning that allows quantum bits - or "qubits" - to have values of one, zero, or both at the same time. Researchers believe this core difference will eventually lead to powerful devices with processing power that will exceed the limits of classic computers.