IBM: Millennials need 3 things from their bosses. IBM Blockchain - How IBM can help. A conversation ensures a shared understanding of blockchain's capabilities and limitations. 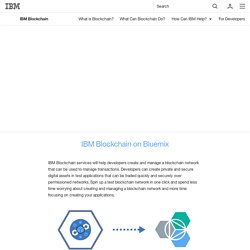 We also explore blockchain’s suitability to the particular business challenge that you have in mind. We then progress to a live demonstration which shows the use of blockchain in an easy to understand car lease use case. The one day Technology Hands-on then provides a deeper dive into the technology – giving you a hands-on experience using and extending a sample application. The First Project starts with a two day Design Thinking workshop where we define the use case and target design, leading to an iterative, agile development of a small scale solution to the business challenge. An astounding achievement - IBM has shrunk for four years. By now most people have given up on IBM (NYSE:IBM). 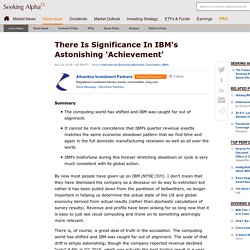 I don’t mean that they have dismissed the company as a dinosaur on its way to extinction but rather it has been pulled down from the pantheon of bellwethers, no longer important in helping us determine the actual state of the US and global economy derived from actual results (rather than stochastic calculations of survey results). Revenue and profits have been sinking for so long now that it is easy to just see cloud computing and move on to something seemingly more relevant.

There is, of course, a great deal of truth in the accusation. The computing world has shifted and IBM was caught far out of alignment. The scale of that drift is simply astonishing; though the company reported revenue declined “only” 4.6% in Q1 2016, which was actually the best topline result in a year and a half, it doesn’t actually do the descent justice. The Four Hundred. Thank You, IBM Published: April 12, 2016 by Brian Kelly The IBM Corporation was run as a benevolent dictatorship through 1971. 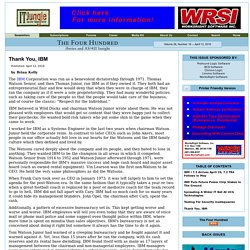 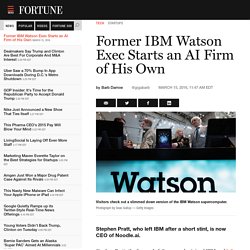 Details on the web site are sparce but what’s there reflects Pratt’s background at both InfoSys INFY 2.42% , which provides IT consulting, outsourcing and business process management, and IBM IBM 1.28% , which is as it keeps telling us, is a “cognitive computing and cloud” company. At IBM Pratt headed up Watson Global Business Services, which aimed to speed up commercialization of Watson, IBM’s flagship cognitive computing (or artificial intelligence) technology. Noodle.ai’s web site says it “combines the hard sciences of AI technologies and business process optimization with the arts of organizational change and design thinking—all optimized to help you succeed quickly and affordably.” The New York Times Dealbook has more. IBM Acquiring Truven Health Analytics For $2.6 Billion And Adding It To Watson Health. IBM announced its intent to buy Truven Health Analytics today for a whopping $2.6 billion. 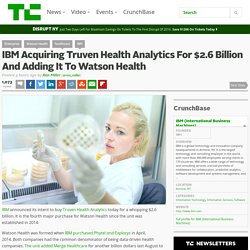 It is the fourth major purchase for Watson Health since the unit was established in 2014. Watson Health was formed when IBM purchased Phytel and Explorys in April, 2014. Both companies had the common denominator of being data-driven health companies. The unit added Merge Healthcare for another billion dollars last August to give the company access to a huge store of imaging data. With today’s purchase, IBM gets access to Truven’s cloud-based data repository, 2500 employees and 8500 clients, including U.S. federal and state government agencies, employers, health plans, hospitals, clinicians and life sciences companies. While Truven gives IBM a treasure trove of data on hundreds of types of cost, claims, quality and outcomes information, it’s not just about the data for data’s sake, says Anil Jain, VP of Watson Health who came to the unit through the Explorys acquisition.

IBM Bets Big On Blockchain, The Bitcoin Technology That Could Revolutionize Business. IBM will announce its plans for developing blockchain, the distributed ledger technology underpinning bitcoin, on Tuesday, according to a report by the Wall Street Journal, as the company seeks to take a lead on what could become a revolutionary technology. 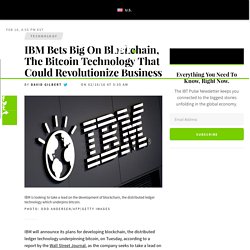 IBM’s CEO Ginni Rometty will reportedly announce details of the company’s plans to advance blockchain technology at a conference Tuesday, including plans to test its own version of the blockchain software during 2016 and its ongoing collaboration with the Hyperledger project. IBM is among a number of companies that have contributed code to the Hyperledger project, which is run by the Linux Foundation, and seeks to build an open source repository of blockchain code that will address current gaps in technology. “The Hyperledger Project is a collaborative effort to focus on an open platform that will satisfy a variety of use cases across multiple industries to streamline business processes,” the foundation said in a statement. Tone Analyzer. IBM Snags Clearleap Video Service As It Continues To Pick Off Strategic Cloud Properties. This morning IBM announced it was acquiring Clearleap, a company that gives it enterprise-grade video content management services in the cloud, and which adds another layer to its burgeoning cloud strategy. 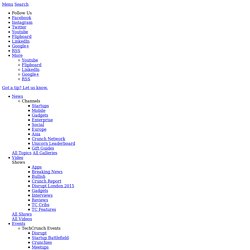 IBM would not disclose the purchase price. Clearleap, whose customers include HBO, The History Channel, Time Warner Cable and Verizon (the parent company of TechCrunch) provides customers with multi-screen video processing and video asset management — and perhaps most importantly the ability to expose these features and functions as open APIs on IBM’s Bluemix Platform as a Service. IBM has been thinking about video for some time and sees it as an increasingly important content type, says Jim Comfort, general manager of cloud services at IBM. “Video will represent 65 percent of Internet traffic going forward,” he said. Can Watson Fix IBM's Fortunes? I'd mentioned a month ago in the Trading With Cody Chat Room that I was excited about the potential for IBM's (IBM) Watson product, and the artificial intelligence it might enable in years ahead. 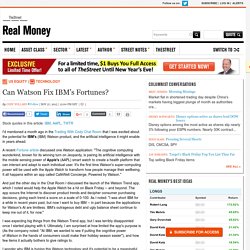 A recent Fortune article discussed one Watson application: "The cognitive computing wunderkind, known for its winning turn on Jeopardy, is pairing its artificial intelligence with the mobile sensing power of Apple's (AAPL) smart watch to create a health platform that can interact and adapt to each individual user. It's the first time Watson's super-computing power will be used with the Apple Watch to transform how people manage their wellbeing. It all happens within an app called CaféWell Concierge, Powered by Watson. " IBM ILMT: It’s All about the Money. Posted November 16, 2015 By EnterpriseAppsToday.com Staff Feedback Those licensing IBM software should understand ILMT's impact on their licensing terms. 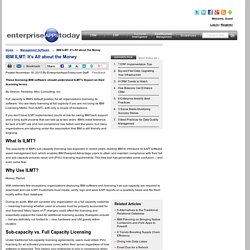 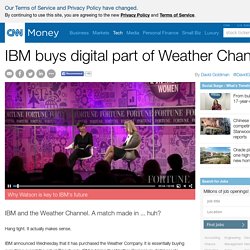 It actually makes sense. IBM announced Wednesday that it has purchased the Weather Company. It is essentially buying everything except the actual TV network. IBM is taking the Weather Company's digital assets, including the uber-popular Weather Channel mobile app, weather.com, and -- most crucially for IBM -- all the company's forecasting data and technology. IBM Watson Developer Cloud. IBM Watson increases its language, vision and speech capabilities. On Sept. 24, 2015, at IBM's newly announced "Watson West" hub, the company unveiled it is making new Watson APIs available to developers, entrepreneurs and businesses. (Tony Avelar/Feature Photo Service for IBM) IBM’s Watson is fast becoming the smartest cognitive computing system around. On Thursday, IBM announced that Watson expanded its set of cognitive APIs (application program interface) and tools available to developers who create apps and products using the supercomputer’s capabilities.

IBM prepares Spark for machine learning. IBM is putting considerable resources behind Apache Software Foundation’s Spark to ready the platform for machine learning duties such as pattern recognition and object classification. The company plans to offer Spark as a service, and has devoted 3,500 researchers and developers to help in its upkeep and further development. It is also contributing some of its own software to the Apache project, namely SystemML, a programming language for machine learning tasks, and will work with Databricks, the company that has largely shepherded the development of Spark to date. In machine learning, computer systems can refine their performance on given tasks as they acquire new information. IBM's Watson supercomputer to speed up cancer care - BBC News. IBM's supercomputer Watson will be used to make decisions about cancer care in 14 hospitals in the US and Canada, it has been announced.

Using computers to trawl through vast amounts of medical data speeds up the diagnosis process. The system will help assess individual tumours and suggest which drug should be used to target them. Doctors have welcomed the new computer which will learn from each case it examines. "When you are dealing with cancer, it is always a race," said Dr Lukas Wartman, assistant director of cancer genomics at the McDonnell Genome Institute at Washington University in St. Louis, one of those signed up to use the Watson system.

"As a cancer patient myself, I know how important genomic information can be. IBM to splash out $3bn on IoT and cloud-based open platform- The Inquirer. IBM IS INVESTING $3bn over the next four years in the development of a new Internet of Things (IoT) unit. The idea is to build a cloud-based open platform to help IBM's clients and ecosystem partners across industries better integrate real-time data. The investment comes in the form of three services to address the fact that 90 percent of all data generated by modern devices is wasted and not acted on, according to IBM. The firm added that 60 percent of this data "begins to lose value within milliseconds of being generated". The first of these three services is the IoT Cloud Open Platform for Industries.

IBM wants to replace the spreadsheet with Watson Analytics. Watson Analytics - Overview. IBM to shutter SmartCloud, move customers to SoftLayer. IBM Said to Reassign Emerging-Markets Head After Sales Slump. International Business Machines Corp. (IBM) is reassigning James Bramante, who had overseen its emerging-markets business, after a drop in the unit’s sales, according to a person with knowledge of the matter.

Bruno Di Leo, who formerly ran IBM’s growth markets and is now head of sales, will be in charge of setting up a new team to oversee the unit, said the person, who asked not to be identified because the information is private. IBM Developing Computer System That Thinks Like a Human. IBM Unveils Latest Version of Spiking Neuron-Based "Brain Chips" Brain-inspired chip fits 1m 'neurons' on postage stamp. IBM Develops a New Chip That Functions Like a Brain - NYTimes.com. Why IBM’s New Brainlike Chip May Be “Historic”

Amazon VS IBM In A Battle For The Cloud. Why IBM Will Win the War With Amazon Web Services. IBM to Buy Cloud-Computing Firm SoftLayer for $2 Billion. Revenue Down at I.B.M., but Earnings Are Better Than Expected. Apple and IBM form apps and sales partnership.