Scientist talking about what they do.

199 labs turned him down. This teen made a groundbreaking discovery at the 200th. Nature of Science - Bill. #ScienceWoman: Jackie Faherty. Famous Scientist Facts & Quotes - Inventors, Chemists, Biologists, Physicists. Melanie Cheung - Neurobiologist. My advice to those wanting to study neurobiology or biology would be to take biology, chemistry, English, statistics and art at high school. 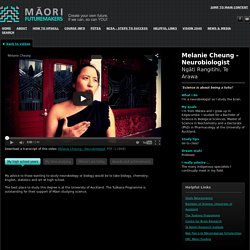 The best place to study this degree is at the University of Auckland. The Tuākana Programme is outstanding for their support of Māori studying science. For my Master of Science, I received the Tūāpapa Putaiao Māori Fellowship awarded by the Foundation of Research, Science and Technology. For my doctorate, I was awarded the Health Research Council of New Zealand Māori Health PhD Scholarship, the University of Auckland Māori and Pacific Graduate Scholarship for Doctoral Study and Ngā Pae o te Māramatanga MAI Doctoral Scholarship.

So check out the Health Research Council Māori Master and PhD scholarships, University of Auckland Māori Masters and PhD scholarships and Ngā Pae o te Māramatanga PhD scholarships. The best thing about being at uni was meeting lots of amazing and incredibly talented indigenous people from around the world. Māori Future Makers. Dave Herman - Nanoscientist. I went to two schools - the American School of the Hague in the Netherlands and Hutt Valley High School. 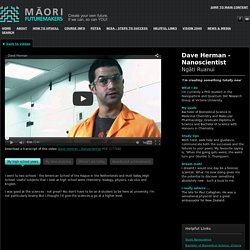 Useful subjects that I took at high school were chemistry, biology, physics, calculus and English. I was good at the sciences - not great! You don't have to be an A-student to be here at university. I'm not particularly brainy. But I thought I'd give the sciences a go at a higher level. I'm currently a PhD student in the Nanoparticle and Quantum Dot Research Group at Victoria University. When I complete my PhD, my goal is to become a nanotechnology consultant to emerging science companies. I've submitted my PhD thesis and I'm awaiting my examination. 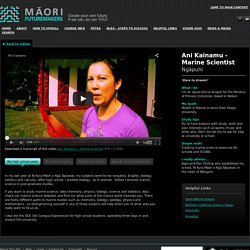 After high school, I studied zoology - as in animals - before I entered marine science in post-graduate studies. If you want to study marine science, take chemistry, physics, biology, science and statistics. Also, check out marine science websites and find out what parts of the marine world interests you. There are many different parts to marine studies such as chemistry, biology, geology, physics and mathematics - so strengthening yourself in any of these subjects will help direct you to what area you really want to focus on. I also did the OCE (On Campus Experience) for high school students, spending three days in and around the university.

I was helped out by Te Rūnanga o Ngāpuhi, Te Ohu Kaimoana and the Māori Education Trust. You can study at Otago, Auckland and Victoria universities. 10 Questions for Nate. Eva Vertes: Monkeys with Ebola. Meet the Paleontologists. Nature Of Science - Sandy. Nature of Science - Bill. Nature of Science - Alex. 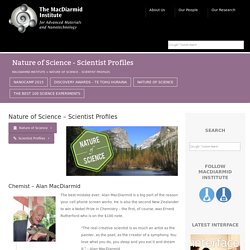 He is also the second New Zealander to win a Nobel Prize in Chemistry – the first, of course, was Ernest Rutherford who is on the $100 note. “The real creative scientist is as much an artist as the painter, as the poet, as the creator of a symphony. You love what you do, you sleep and you eat it and dream it.” – Alan MacDiarmid Download PDF Watch: SuperPlasticsMan- The Alan MacDiarmid Story courtesy of Hot Science. Experimental Physicist – Sir Paul Callaghan At the heart of matter: Look around you. Zoom in a thousand times and a piece of paper would transform into a tangled network of fibres. Zoom inside a molecule and you would find yourself in a vast expanse of empty space. Engineering Scientist – Professor Richard Blaikie If you talk to a scientist about their work, you might be surprised how often you hear the word passion.

Melissa Marshall: Talk nerdy to me.