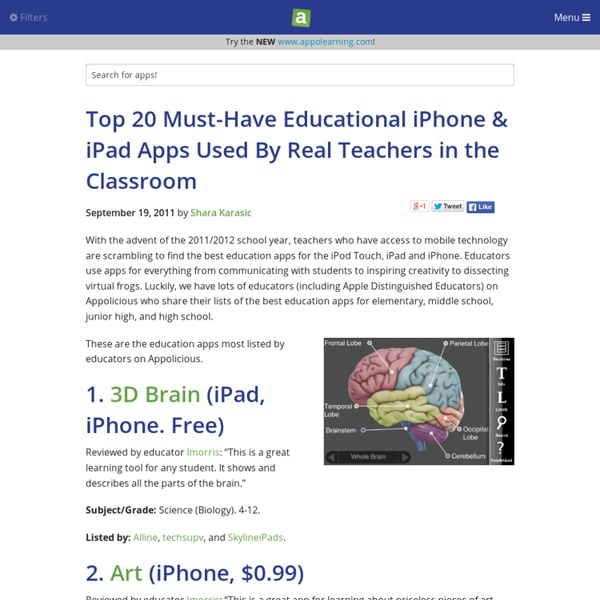 With the advent of the 2011/2012 school year, teachers who have access to mobile technology are scrambling to find the best education apps for the iPod Touch, iPad and iPhone. Educators use apps for everything from communicating with students to inspiring creativity to dissecting virtual frogs. Luckily, we have lots of educators (including Apple Distinguished Educators) on Appolicious who share their lists of the best education apps for elementary, middle school, junior high, and high school. These are the education apps most listed by educators on Appolicious. 1. 3D Brain (iPad, iPhone. Free) Reviewed by educator lmorris: “This is a great learning tool for any student. Subject/Grade: Science (Biology). 4-12. Listed by: Alline, techsupv, and SkylineiPads. 2. Reviewed by educator lmorris: “This is a great app for learning about priceless pieces of art. Subject/Grade: Art. 6-12. Listed by: justatitch, uwcsea and LaurieFowler. 3. Subject/Grade: Language Arts, Math, Science. 4. 5. 6. 6. 7. 8. 9.

Subject Areas Archive iPad Dinosaur Fact Files Which immense meat-eating dinosaur had a brain both the size and the shape of a banana? Did you know that Triceratops had 432 teeth? Science Education on the Edge · Why I abandoned my AppleTV for Airserver In which an Apple fan chooses a cheaper alternative for sharing iPad screens. Simply put, there are times that I need to show content-related stuff to my class so we can engage material as a group. Call it lecture, call it discussion, call it whatever you like. When I first started teaching, that consisted of a chalkboard and my lame drawing skills. These days I’m much more of a tech geek, but even tech geeks have to experiment with what works for sharing material with the class. For a long time I ran my classroom primarily with a standard setup of a laptop and an LCD projector that could project to a pull-down screen in the front of the class.

10 iPad tips every teacher should know Over the last couple of months I have just about switched from my trusty old laptop to the iPad as my primary work computer. Basically, the iPad does everything I could do on my PC and a great deal more through all of the apps available specifically for teaching. As a result of this, more of our staff are fronting up to work with iPads as they can also see the benefits in using a tablet for conferencing with students, checking email and using with their interactive white boards. The first questions I get from new users are generally "What can I do with it?" And "What apps should I have on it?"

iPads in the Classroom I've never worked on a Mac. I don't even own an iPhone. But one night four months ago, I borrowed an iPad from our Technology Department to see what all the fuss was about. As a baseball coach and sponsor of our school's broadcasting club, I thought the iPad might be useful for video analysis and editing. And it is. What I never expected was to find so many practical functions for my classroom.

Light Particle Manipulation Apps For The iPad: iPad/iPhone Apps AppGuide Overview Have you ever wanted to control light particles? It is a cool thing to do and now with apps on the iPad you can. There are some truly fantastic apps that allow you to create some amazing visuals. We could even see people putting on performances of light based apps. Check out this AppGuide for our favorites. New: 10 of the best Apple apps for education in 2012 New apps include student file sharing, special education, cyber bullying information By Meris Stansbury, Associate EditorRead more by Meris Stansbury April 21st, 2012 One app teaches young students about cyber bullying. A Quick Guide To Managing A Classroom Full Of iPads The following is a sponsored post by Datamation Systems, Inc. . They’ve worked with more than 10,000 schools to help deploy and secure classrooms full of technology. Want to learn more? Check out their ad in the Edudemic Magazine or visit the Datamation website here . iPads are fun. Apps are fun.

Autism Autism is a disorder of neural development characterized by impaired social interaction and verbal and non-verbal communication, and by restricted, repetitive or stereotyped behavior. The diagnostic criteria require that symptoms become apparent before a child is three years old.[2] Autism affects information processing in the brain by altering how nerve cells and their synapses connect and organize; how this occurs is not well understood.[3] It is one of three recognized disorders in the autism spectrum (ASDs), the other two being Asperger syndrome, which lacks delays in cognitive development and language, and pervasive developmental disorder, not otherwise specified (commonly abbreviated as PDD-NOS), which is diagnosed when the full set of criteria for autism or Asperger syndrome are not met.[4] Characteristics

Study: iPad Still King of Tablet Web Usage In a little over two years since the inception of the iPad, tablet computers have rapidly been popularized and diversified to an astounding degree in the tech world. Tablets are being increasingly thought of as second screen devices – an alternative means to browse the Web or engage in e-commerce. In this period of time, the amount of options within the tablet market has expanded significantly, with varying improved system specifications, operating systems, and price points.

15 Ways To Use The New iPad In Classrooms A Useful Twitter Cheat Sheet 3.97K Views 0 Likes Think you're supposed to actually type a full 140 characters for each tweet? One iPad in the Classroom? – Top 10 Apps (www.langwitches.org) From a BYOD (Bring Your Own Device) programme to a 1:1 iPad initiative there are a number of options available to schools when embracing new technology in the classroom. Consequently it is becoming common for school leaders to purchase a device to trial in the classroom before making any real financial commitment.