Full Moon In Virgo: Striving To Be More Productive And Healthy. We are having a Full Moon in Virgo on February 22nd at 6:20pm Universal Time (February 23rd in the East). 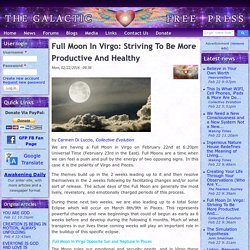 Full Moons are a time when we can feel a push and pull by the energy of two opposing signs. In this case it is the polarity of Virgo and Pisces. The themes build up in the 2 weeks leading up to it and then resolve themselves in the 2 weeks following by facilitating changes and/or some sort of release. The actual days of the Full Moon are generally the most lively, revelatory, and emotionally charged periods of this process. During these next two weeks, we are also leading up to a total Solar Eclipse which will occur on March 8th/9th in Pisces. Twin Flame Separation – Why It Happens and Why It Haunts Us. Twin flame separation is not like typical relationship breakdown. 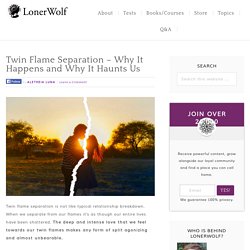 When we separate from our flames it’s as though our entire lives have been shattered. The deep and intense love that we feel towards our twin flames makes any form of split agonizing and almost unbearable. Five Stories About Espionage. The life of a spy is supposed to be glamorous. 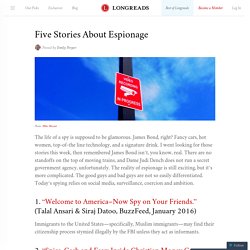 James Bond, right? Fancy cars, hot women, top-of-the line technology, and a signature drink. I went looking for those stories this week, then remembered James Bond isn’t, you know, real. There are no standoffs on the top of moving trains, and Dame Judi Dench does not run a secret government agency, unfortunately. The Secret Lives of Tumblr Teens. At Tumblr headquarters, I found myself in a contest of name-dropping teenagers’ URLs, much the same way people dropped indie rock bands in college. 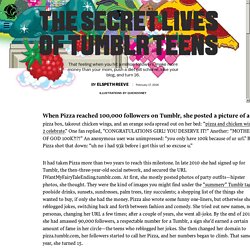 Danielle Strle told me about Cornputer; I had to tell her that Heckacute had gone password-protected. “Oh my God, you know Pizza?” Strle said. Why was I jealous of a dancer? 16 Signs That You Have Hidden Healing Abilities. By Jeff Wilson The Spirit Science Everyone has the potential to be whatever they want and influence the world in whatever way they desire. 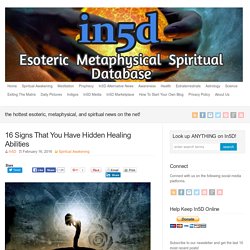 There is no denying that each person has certain attributes that have been nurtured more than others. Whether done on purpose or subconsciously, its important that we be able to diagnose our strengths and attend to our weaknesses. Healers are present in every society and never really sought out until circumstances force us to seek them out. New Powers, Abilities, And DNA Upgrades. By Kyle Croft via transients.info I consider myself to be “in the loop.” 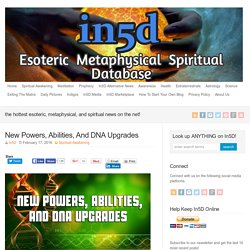 Its the age of Aquarius now and what was once impossible is now becoming a reality. This shift is going to be a strong one, and it will alter the lives of many people. Ever since December 21st, 2012, our planet and solar system has been in a new area of space. We are now in a photon belt and it is full of energy completely new to us. Awakening To The Twin Flame Experience. By Jamie Crume, Guest writer, In5D.com Ascension has brought many ideas forth, one of the more popular ideas to date is the idea or concept of twin flames. 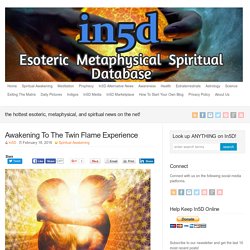 Are twin flames metaphors for the divine Feminine and the divine Masculine merging? One of the earliest accounts of where this concept was actually first referenced was the Greek philosopher Plato , here is an excerpt from his writings: Grow Back Your Receding Gums In No Time With The Help Of These Natural Remedies. By Healthy Definition The situation of receding gums happens when the tissue of the gum around the teeth corrodes and it looks like your gums recede backwards. 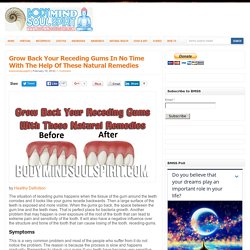 Then a large surface of the teeth is exposed and more visible. When the gums go back, the space between the gum line and the teeth rises. That is perfect place for bacteria growth. Another problem that may happen is over exposure of the root of the tooth that can lead to extreme pain and sensitivity of the tooth. Strategic Sorcery Blog. Not on Tetrahydrocannabinol (though, you know, maybe…). 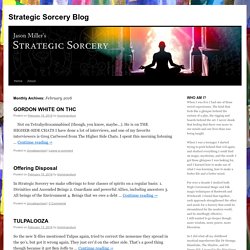 He is on THE HIGHER-SIDE CHATS I have done a lot of interviews, and one of my favorite interviewers is Greg Carlwood from The Higher Side Chats. I spent this morning listening … Continue reading Offering Disposal In Strategic Sorcery we make offerings to four classes of spirits on a regular basis: 1. Sacrifice And Its Discontents: An Extradimensional Exchange Mechanism.

10 Reasons Why You Should Do Magick. Magick. 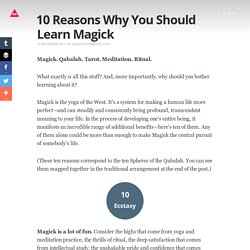 Qabalah. Tarot. Meditation. Ritual. What exactly is all this stuff? The Best Articles on Farnam Street. Knowing where to start can be a little difficult. To help, I've compiled a list of the best articles based on popularity, feedback I've received, or impact on people's lives. Mental Models/Thinking. Fastcompany. Andreas Gal is describing to me what it's like to turn on a Wi-Fi-enabled light using your phone, and he's making it sound like a major step backwards rather than the way of the future. "You have to fumble out your smartphone and turn it on and type in your PIN code and launch an app," he says. "We just made your experience four steps worse than flipping a light switch next to you. " Gal's startup, Silk Labs, is building an operating system—also called Silk—which is designed to push more computational smarts into the gizmos inside a home, thereby making them less reliant on smartphones—and also less dependent on the cloud, which does a lot of the heavy lifting for smartphones and for existing smart-home devices such as Nest's Nest Cam security camera (formerly known as Dropcam).

It's an ambitious goal that involves convincing hardware makers to license Silk, and if things happen as quickly as Gal hopes, Silk-powered products might be available sometime in 2017. Fastcompany. Ask BuzzFeed CEO Jonah Peretti about his influences, and his answer sounds like, well, a BuzzFeed post—one titled "The Three Historical References That Explain BuzzFeed Will Make You Say WTF. " Peretti first points to a company that started more than 100 years ago, Paramount Pictures, which owned a film production studio, its own cast of talent, and its own distribution channel in the form of theaters.

"That allowed them to adapt and change as the market changed," says Peretti. Peretti’s second fascination is with CNN—how founder Ted Turner ran a 24-hour news operation at a fraction of the cost of what the networks spent, due in part to prescient use of satellite and cable technology. Fastcompany. It's the age-old question of "having it all": How do you straddle the responsibility of raising kids while making a living in a world that asks everything of us? It's challenging enough to maintain a career and be a present and engaged parent, but maintaining a regular creative practice can be even more difficult. Alice Proujansky, a documentary photographer based in Brooklyn, has been exploring this question as part of her project "Working Mothers.

" How to have a creative career and raise kids is something that Proujansky has struggled with herself, as the mother of two small children. "I had kids when I had already established an identity as a working photographer," she says. "Those identities bump up against each other in very conflicting ways. "