25 Cheat Sheets For Taking Care Of Yourself Like A Damn Adult. 10 "Spiritual" Things People Do That Are Total Bullshit. No one ever told me spirituality could be a self-sabotaging ego trap. 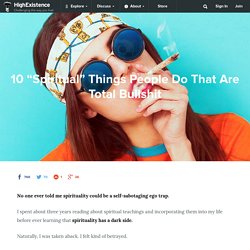 I spent about three years reading about spiritual teachings and incorporating them into my life before ever learning that spirituality has a dark side. Naturally, I was taken aback. I felt kind of betrayed. How could something that seemed so pure and good be harmful? The answer has to do with something that psychologists call spiritual bypassing.

According to integral psychotherapist Robert Augustus Masters, spiritual bypassing causes us to withdraw from ourselves and others, to hide behind a kind of spiritual veil of metaphysical beliefs and practices. Nobody Knows What The Hell They Are Doing. There’s an old puzzle that philosophers like to ponder: how could you ever be certain that anyone else has a mind at all? 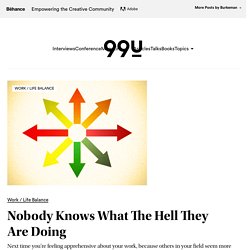 The truth is that you can’t. Ultimately, even our closest relatives—people we’ve known for decades, or who gave birth to us, or vice versa—are closed books: you’ll never get direct access to their thoughts or emotions. It’s the sort of terrifying realization that might trigger an existential meltdown in the sanest of us. Yet when it comes to creativity, it’s actually enormously liberating. By nature, human beings are comparers: our happiness depends, at least partly, on feeling better off than others. France's New "Right to Disconnect" Work Law Takes Effect January 1. France is taking a big step to change our plugged-in work culture: The country is starting off 2017 with a new law that gives workers the "right to disconnect. 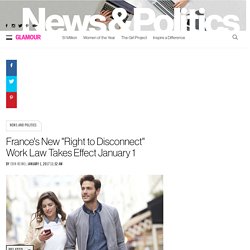 " Starting today, French employers will have to list out certain hours when their workers won't be expected to check or respond to work emails. The 7 Worst Pieces of Health Advice We Always Hear. Healthy Eating and Recipes Most of us know not to believe every piece of health advice we read in the news. 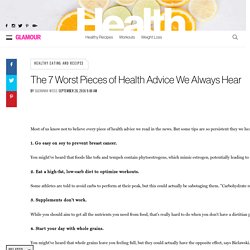 But some tips are so persistent they we hear them everywhere, even if they're dead wrong. And since medical knowledge changes over time, many of the healthy living tips we assume are cold hard facts are actually under debate within the medical community—or even considered downright bad. Here are the current trendy pieces of advice that professionals most vehemently disagree with. Are you ready to become a digital nomad? Co-working spaces are popping up from Boston to Berlin to Bali – all you need is a laptop and Skype. 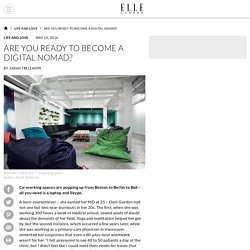 A born overachiever – she earned her MD at 25 – Dani Gordon had not one but two near-burnouts in her 20s. The first, when she was working 100 hours a week in medical school, sowed seeds of doubt about the demands of her field. Yoga and meditation helped her get by, but the second instance, which occurred a few years later, while she was working as a primary-care physician in Vancouver, cemented her suspicions that even a 60-plus-hour workweek wasn’t for her. “I felt pressured to see 40 to 50 patients a day at the clinic, but I didn’t feel like I could meet their needs for issues that don’t respond well to pills – like stress, fatigue, insomnia and anxiety,” says Gordon.

And so, at the age of 27, she fled with her now husband – a yogi and hypnotherapist – to Thailand for a six-month sabbatical. How to Live Alone Without Going Crazy. A Getty stock photo of a woman who probably lives alone I recently achieved a dream I never quite thought I would reach: I now live alone in New York City. 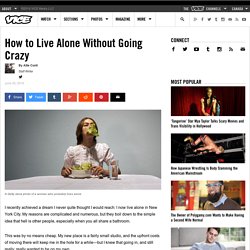 My reasons are complicated and numerous, but they boil down to the simple idea that hell is other people, especially when you all share a bathroom. WTF Is A Bullet Journal And Why Should You Start One? An Explainer. A Nature Walk Might Not Actually Be The Best Thing For You. A new U.S. study looking at which environment is most restorative mentally has found perhaps surprisingly that a calming walk in nature is not always the best choice for all. 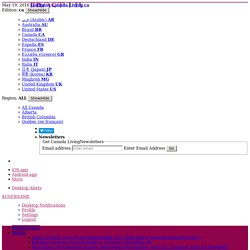 Researchers at Providence College in Rhode Island found that the type of environment that is most restorative and rejuvenating mentally depends on your personality type, with those that are more prone to neuroticism better suited to a walk in a busy, urban environment rather than a natural one. For their research the team asked participants to perform tasks that were mentally draining, such as writing sentences without using the letters "A" or "N. " Participants then had to answer questions that would help the researchers determine their level of neuroticism, including questions on whether they were a worrier, irritable, highly strung or experienced up and down moods. No, Everything Does Not Happen for a Reason. Thank God for That. "Everything happens for a reason" is my very least favorite thing for someone to say. 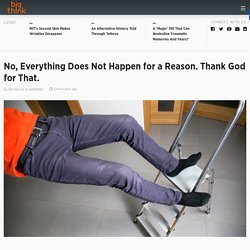 It is bad philosophy, bad theology, bad thinking, and bad advice. It manages to combine the maximum of ignorance with the maximum of arrogance. Other forms of this include: "There is no such thing as coincidence," and: "It's all part of the great plan. " They are all the intellectual offspring of Leibniz's ludicrous claim that "this is the best of all possible worlds. " What it Really Means to Hold Space for Someone.

When my Mom was dying, my siblings and I gathered to be with her in her final days. 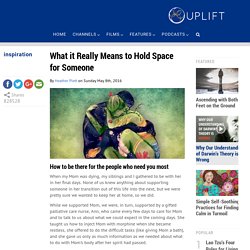 None of us knew anything about supporting someone in her transition out of this life into the next, but we were pretty sure we wanted to keep her at home, so we did. While we supported Mom, we were, in turn, supported by a gifted palliative care nurse, Ann, who came every few days to care for Mom and to talk to us about what we could expect in the coming days. She taught us how to inject Mom with morphine when she became restless, she offered to do the difficult tasks (like giving Mom a bath), and she gave us only as much information as we needed about what to do with Mom’s body after her spirit had passed. The author with her mother “Take your time,” she said. 7 Cheap And Unexpected Date Ideas You Need To Try Immediately. After ‘The Biggest Loser,’ Their Bodies Fought to Regain Weight.

There is always a weight a person’s body maintains without any effort. 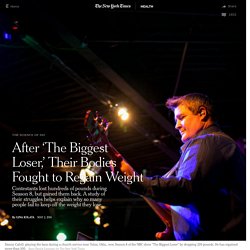 And while it is not known why that weight can change over the years — it may be an effect of aging — at any point, there is a weight that is easy to maintain, and that is the weight the body fights to defend. Finding a way to thwart these mechanisms is the goal scientists are striving for. First, though, they are trying to understand them in greater detail. Dr. David Ludwig, the director of the New Balance Foundation Obesity Prevention Center at Boston Children’s Hospital, who was not involved in the research, said the findings showed the need for new approaches to weight control.

Should You Ever Start a Business With Your BFF? She's already your partner in crime—so why shouldn't your money-savvy, technology-talented BFF also be your business partner? As Jill Jacinto, millennial career expert and associate director of communications for WORKS, points out, "you love your best friend already, and if you have a chance to spend your work day hours with her, too, what could be better?

" Picture it: You'd energize each other with your on-point pep talks and your '90s pop Spotify playlists. You'd bond over business card designs and celebrate successes with champagne—at 9 a.m., because your BFF does not judge. Guest Post: “There’s No Crying in Academia,” Acknowledging Emotional Labour in the Academy. I’ve been thinking a lot lately about the demands made on graduate students and the emotional labour that is required as a result. Academia privileges and glorifies mental labour (from the qualifying exams you have to take to the dissertation that you will write).

But in my experience, the academy is mute when it comes to the question of the emotional labour that these acts of mental and intellectual rigor entail. Nobody talks about his or her feelings. 9 Things You Don't Have To Tell Your Parents About As A Grown-Ass Woman. Some of us grow up with our parents as confidantes, taking part in every small struggle, Gilmore Girls-style; others have parental relationships involving more structured disclosure, where nobody knows everybody's business. But either way, chances are that, as you grow up, you'll have occasions where you feel you have to tell your parents something because, well, they're your parents, and don't they have a right to know?

Well, it depends. Realsimple. I would suggest four pieces of advice for people who want to enhance their bravery. The first is to break the challenge into steps, so each step gets easier as you’ve had an initial success. Most of us would feel overwhelmed thinking about doing something gigantic, but it becomes easier if you break it down. My second piece of advice would be to make sure people give themselves credit. 20 Signs You’re Doing Better Than You Think You Are. The Quickest Way to Eliminate Tension. Photo by JGI/Jamie Grill/Getty Images Massage doesn't just feel ahh-mazing. It boosts circulation, improves immunity, and reduces stress hormones, like cortisol, too. Massage therapy isn't exactly cheap, but fortunately you don't have to see a professional to reap the benefits.

Several of the areas that tend to get the sorest also happen to be the easiest to massage on your own. Perhaps You Should Just Stay Fat. Fastcompany. To-anyone-who-thinks-theyre-falling-behind_b_9190758. The Creative Force Behind the Land of Nod. Imagining your future projects is holding you back. 23 Ways To Treat Yo' Self Without Buying Or Eating Anything - Yes and Yes. 26 Incredibly Specific Workout Playlists For Every Human Ever. 25 Things Every Grown-Ass Adult Should Have. 17 Cleanses That Will Help You Start 2016 Off Right. Realsimple. 36 questions to get to know yourself better - imperfections and all. Loving Your Body: Tips for the Ongoing Process of Body Positivity - The Pulp Zine. Lost Posture: Why Some Indigenous Cultures May Not Have Back Pain : Goats and Soda.

Brené Brown: The power of vulnerability. Magazine - Is Google Making Us Stupid? Illustration by Guy Billout "Dave, stop. Stop, will you? Stop, Dave. Will you stop, Dave?” So the supercomputer HAL pleads with the implacable astronaut Dave Bowman in a famous and weirdly poignant scene toward the end of Stanley Kubrick’s 2001: A Space Odyssey. I can feel it, too. I think I know what’s going on. For me, as for others, the Net is becoming a universal medium, the conduit for most of the information that flows through my eyes and ears and into my mind. I’m not the only one. Bruce Friedman, who blogs regularly about the use of computers in medicine, also has described how the Internet has altered his mental habits.

How to suck at your religion. 9 Reasons You’re Still Not Financially Stable. Le Projet D'Étiquette Urbaine. How To Make Friends When You're 'Old'