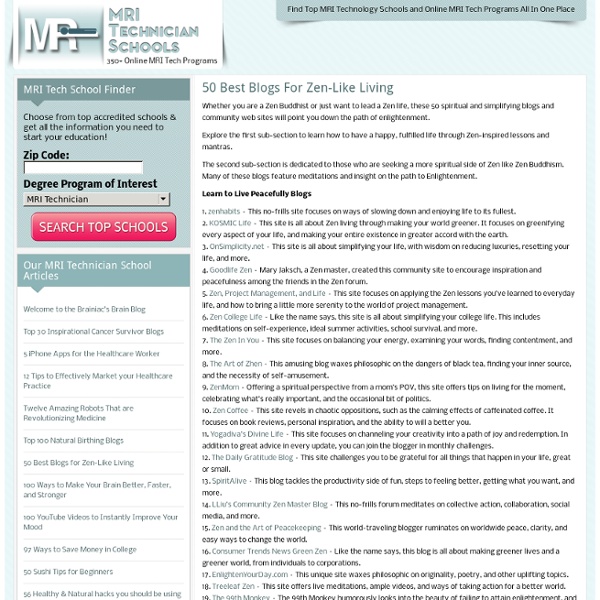 Whether you are a Zen Buddhist or just want to lead a Zen life, these 50 spiritual and simplifying blogs and community web sites will point you down the path of enlightenment. Explore the first sub-section to learn how to have a happy, fulfilled life through Zen-inspired lessons and mantras. The second sub-section is dedicated to those who are seeking a more spiritual side of Zen like Zen Buddhism. Many of these blogs feature meditations and insight on the path to Enlightenment. Learn to Live Peacefully Blogs 1. zenhabits – This no-frills site focuses on ways of slowing down and enjoying life to its fullest. 2. Ahh. Search our database of 350+ colleges and universities to find the right program for you. Related:  lifestyle

10 simple things you can do today that will make you happier, backed by science Happiness is so interesting, because we all have different ideas about what it is and how to get it. It’s also no surprise that it’s the Nr.1 value for Buffer’s culture, if you see our slidedeck about it. So naturally we are obsessed with it. I would love to be happier, as I’m sure most people would, so I thought it would be interesting to find some ways to become a happier person that are actually backed up by science. Here are ten of the best ones I found. 1. You might have seen some talk recently about the scientific 7 minute workout mentioned in The New York Times. Exercise has such a profound effect on our happiness and well-being that it’s actually been proven to be an effective strategy for overcoming depression. The groups were then tested six months later to assess their relapse rate. You don’t have to be depressed to gain benefit from exercise, though. 2. In NutureShock 3, Po Bronson and Ashley Merryman explain how sleep affects our positivity: 3. Love this post? 4. 5. 6. 7. 8.

Lost medieval city found in Cambodia using revolutionary scanning technology and Indiana Jones-style expedition Archaeologists used Lidar technology that combines narrow lasers with radars to scan the ancient cityIt was attached to a helicopter that spent a week flying over the site north of Angkor Wat collecting the data By Victoria Woollaston Published: 22:36 GMT, 15 June 2013 | Updated: 16:17 GMT, 19 June 2013 A group of daring archaeologists uncovered a lost 1,200-year-old city on a misty Cambodian mountain by hacking through the thick jungle, strewn with live land mines. Yet they were also aided in their quest by some incredible technology that revealed the ancient city to them in the first place, and guided by a local - a one-legged former Khmer Rouge soldier. Mahendraparvata, the city they found, is thought to pre-date the famous site of Angkor Wat by around 350 years and lies only 25 miles west of that huge temple. Archaeologists believe Mahendraparvata was the first city of the Angkor Empire in 802 AD. Technology: The airborne Lidar system revealed a long-forgotten urban landscape

7 Superfoods for Your Health Were you under the assumption that a superfood is some type of strange and foreign melon from an exotic, far-off country? If so, I’m happy to inform you that superfoods come in many shapes and varieties, and some of these foods are probably in your kitchen right now! Checkout our list of delicious superfoods with phenomenal health benefits and tasty appeal. We’ve even included a super-easy smoothie recipe packed with these superfoods. Even more, this recipe is practically guaranteed to make your taste buds do a little happy dance. Click here to share this infographic on your website. Copy/paste the code below to add this infographic to your site.

28 of the best pieces of advice about life you'll ever read Have the courage to live a life true to yourself, not the life others expect of you. Never attribute to malice that which can be adequately explained by stupidity. “There is nothing noble in being superior to your fellow man; true nobility is being superior to your former self.” Ernest Hemingway Don’t make decisions when you’re angry. “Never argue with a stupid person, they’ll drag you down to their level and beat you with experience.” Only pack what you can carry yourself. Remember you’ll always regret what you didn’t do rather than what you did. “You’d worry less about what people think about you if you knew how seldom they do.” If you blame it on someone else, don’t expect it to get better. “You can be the ripest, juiciest peach in the world, but there will always be someone who hates peaches.” If the grass is greener on the other side, there’s probably more manure there. Don’t give up what you want most for what you want now. Strive to be the man you want your daughter to marry.

The Appennine Colossus | Unusual Places Measuring about 35 feet tall, it’s arguably the most spectacular feature of the gardens of Villa Medici at Pratolino , now part of Villa Demidoff, located about 7 miles north of Florence, Italy. A personification of the Apennine mountain ranges, it’s sculpted as though on that minimal margin between landscape and man, its smooth skin emerging out of the rough terrain or metamorphosing back into a mountain. He even has stalactites for a shaggy beard. This colossal sculpture recalls the figure of Atlas in Virgil’s Aeneid, and also the architect Dinocrates’ proposal to shape Mount Athos into a man in honor of Alexander the Great. Giovanni Bologna, Appennino, 1579 The Appennino in 1911. With seemingly all the might of his hand, he squeezes the head of a monstrous beast, which spills a cascade of water out of its hell-mouth and into a fish pond. Of course, the Appennino isn’t just a sculpture. Appennino sliced and split. Section of Appennino. There’s also some sort of fireplace in the head.

40 Tips for a Happier Life Since the end of the 90s a new branch of the science, also known as Positive Psychology has been dealing with the essentials for happiness. In order to help you find out which happiness potentials are maybe lying idle with you, I have summarized the 40 most important insights on the subject “happiness” in an abbreviated format in the following “checklist”. 1. Whoever knows more about him/herself, will better be able to tap into his/her potential, advance his/her development and learn to better deal with critical issues. 2. Professional and private activities conveying the feeling of absolute fulfillment create “flow” in us – and that makes us happy. 3. People living in long-lasting, good partner relationships are evidentially happier than singles. 4. Whoever sees him/herself as important contributor in his/her work, experiences his/her occupation as meaningful and feels that his/her special skills are needed is happier than those who are just ”doing their job”. 5. 6. 7. 8. 9. 10. 11.

The Town that spent 25 Years Underwater This is Villa Epecuen, an old tourist town south of Buenos Aires that spent a quarter of a century underwater. Established in the 1920s on the banks of a salt lake, the town was home to over 5,000 residents and a holiday destination to thousands more vacationers from the Argentinian capital. In 1985, a dam burst and buried the town in 33 feet of salt water, rendering it a modern-day Atlantis. Initially, people waited on their roofs, hoping for the water to recede. It didn’t, and within two days, the place was a devastated ghost town. In 2009, the waters began to recede and what emerged resembles an apocalyptic world. Evenly-spaced dead trees still line what used to be streets, rusty bed frames poke out from concrete rubble and sign posts point to nowhere. Amazingly, one resident remained in this desolate place. See more photography by Juan Mabromata and Flickr user F.

The Top 7 Signs of Self-Sabotaging Behaviors, self-sabotage, self-defeating behaviors, Holistic Living Having trouble reaching all your goals? Are you going for what you want, but feeling like something is road-blocking the way? Are you finding yourself "not" doing some of the things you know you should be doing? You may be a victim of sabotage---self-sabotage. See Also: A Positive Mindset is the Foundation for Success Don’t limit your thinking, as this will limit your beliefs and these will limit your actions, which will limit your successes! Develop Goals, Visualize, and Get It Your mind is your mental workshop. What can I do to succeed? A Goal is a Must so is Concentration Concentration is the magic key that opens the door to accomplishment. You Can Succeed Even in Failure Failure is one of the surest stepping stones to success. 18 Rules For Life Some commonsense rules to follow to have a happy life. More Inspirational Articles Unlock the secret success formula contained within "Think and Grow Rich" . . .