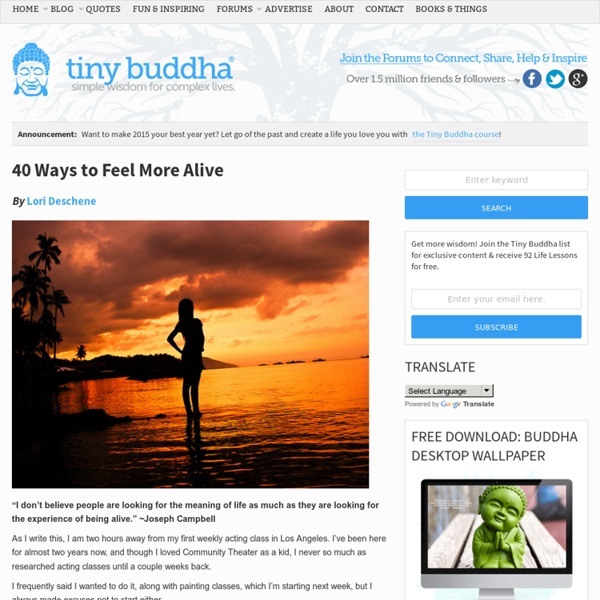 “I don’t believe people are looking for the meaning of life as much as they are looking for the experience of being alive.” ~Joseph Campbell As I write this, I am two hours away from my first weekly acting class in Los Angeles. I’ve been here for almost two years now, and though I loved Community Theater as a kid, I never so much as researched acting classes until a couple weeks back. I frequently said I wanted to do it, along with painting classes, which I’m starting next week, but I always made excuses not to start either. I was too busy. The list went on and on, but I realized the last two were the big ones for me. Also, I hesitate to give large amounts of time to hobbies I have no intention of pursuing professionally. I realized last month, however, that I want to prioritize more of the things that make me feel passionate and excited—and not just occasionally, but regularly. I don’t know if these classes are “leading” anywhere. Say Something You’ve Been Meaning to Say 1. 2. 3. 4. 5. 6.

25 Great Motivational Quotes You've Never Heard Of inShare66 63Probably my most read post ever was the 20 Greatest Motivational Quotes of All Time. So much so that I expanded the post and wrote a book with the 50 greatest quotes in that is now sent free to my new newsletter subscribers. How to use Evernote to enhance your productivity and improve your understanding of medicine Readers of the iMedicalApps forums will have seen that Evernote was rated particularly highly by a number of commenters when asked ‘How do you use mobile technology to help with your studies’. As a result of this, I was encouraged to try Evernote out for an extended period and see what impact it could make upon my learning. I am pleased to say that I have now had enough time to explore Evernote and can now highly recommend it as one of the best note taking apps for medical purposes. So without further ado… What is Evernote?

16 Things I Wish They Had Taught Me in School I am 28 now. I don’t think about the past or regret things much these days. But sometimes I wish that I had known some of things I have learned over the last few years a bit earlier. 50 Ways To Be AWESOME by Meg RulliFebruary 18, 2013 Sharebar Tony and I just completed our trip around the world and as we are reconnecting with friends and family from home, I keep getting asked the same question: “Did travel change you?” In short: Nope! 30 Challenges for 30 Days Did you know that it takes 30 days to form a new habit? The first few days are similar as to how you would imagine the birth of a new river. Full of enthusiasm it gushes forth, only to be met by strong obstacles. The path is not clear yet, and your surroundings don’t agree.

7 Basic Things You Won't Believe You're All Doing Wrong If you're like us, you might sometimes have a problem with complex tasks, like trying to drive an ambulance and send a text message at the same time. But hey, at least most of us have figured out the simplest things that get us through the day, right? Except, you know, some of the simple things we've done every day of our lives, like ... What could be simpler than taking a good crap? Even babies are good at it. You might be surprised, then, to find out that even those of us who can burp without throwing up get this wrong every single day.

How to Remove Blocked Energy and Open Your Pathway for Forgiveness 35EmailShare I am so happy to be bringing you this series on forgiveness. I hope you are finding tons of value in it. The third article in the 7 part series, comes from my friend Justin Mazza. A Big List of Sites That Teach You How To Do Stuff With all due respect to Kevin Smith, the web is no longer only for complaining about movies. In fact, there are a large number of very helpful sites that teach you how to do things. These are do-it-yourself sites, but we're not talking about building a deck or baking a cake -- the web is full of more general interest sites that give quality instruction on all sorts of fun and useful projects. Including, sometimes, how to build a deck or bake a cake. In this horribly-titled, but hopefully useful round-up we will specifically focus on such general purpose sites that include some sort of rich media instruction (generally video).

20 Things That Mentally Strong People Don't Do I often write about the things I believe we all should be doing, trying or experimenting with in order to maximize our success and happiness. However, it’s not always the things we do that make the biggest difference in our lives; it’s often the things we avoid doing that have the biggest effect. As human beings, we have a strong aversion to not doing; we feel that in order to produce results, there must be an initial action.