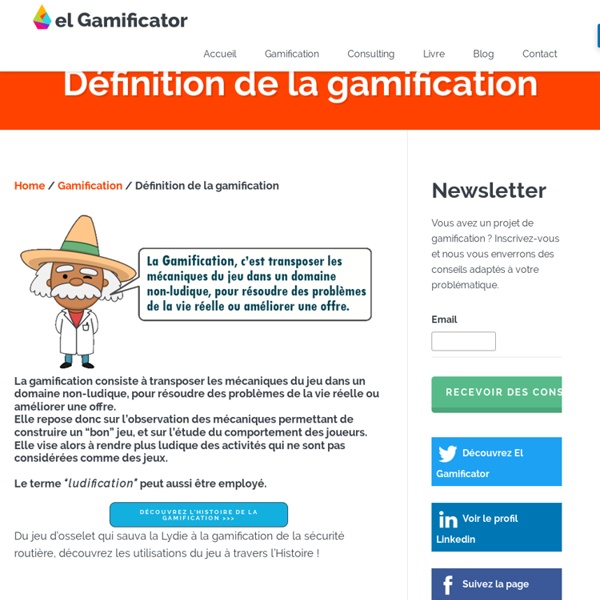 Readings in Social Media 2013 - Serendipity35 This will be the fourth summer that I will teach my graduate class in designing social media. Every year, I have asked online for suggestions of book (not usually "textbooks") for the class which is part of the MS in Professional and Technical Communication at NJIT . Students in the PTC program tend to be (or intend to be) designers, technical writers, media & social media managers, but I always get a few students from the management, communications, media, IT and design majors. Playing action video games can boost learning : NewsCenter A new study shows for the first time that playing action video games improves not just the skills taught in the game, but learning capabilities more generally. “Prior research by our group and others has shown that action gamers excel at many tasks. In this new study, we show they excel because they are better learners,” explained Daphne Bavelier, a research professor in brain and cognitive sciences at the University of Rochester. “And they become better learners,” she said, “by playing the fast-paced action games.” According to Bavelier, who also holds a joint appointment at the University of Geneva, our brains keep predicting what will come next—whether when listening to a conversation, driving, or even preforming surgery. “In order to sharpen its prediction skills, our brains constantly build models, or ‘templates,’ of the world,” she explained.

'Gamification Is Bullshit' - Ian Bogost In his short treatise On Bullshit, the moral philosopher Harry Frankfurt gives us a useful theory of bullshit. We normally think of bullshit as a synonym--albeit a somewhat vulgar one--for lies or deceit. But Frankfurt argues that bullshit has nothing to do with truth. Rather, bullshit is used to conceal, to impress or to coerce. Working with Google Drive Please note: this page reflects operations in MindMup 1.0. Version 2.0 only works with Google Drive, and supports collaboration out of the box. For information on connecting the 2.0 version to Google drive, and transferring maps from 1.0 to 2.0, see MindMup 2.0 For Google Drive Migration guide. Google Drive is a cloud storage from Google that you can use to store and manage private maps, or collaborate with colleagues and friends in a controlled environment.

Why Some Colleges Are Saying No to MOOCs, at Least for Now - Technology By Steve Kolowich Amherst College, known for its selectivity, is accustomed to sending rejection notices. But when the liberal-arts beacon this month turned down an invitation to join the exclusive partnership of colleges offering massive open online courses through edX, it nonetheless drew surprise from many corners of academe. Colleges have clamored to be part of the high-profile consortiums run by edX, a Cambridge-based nonprofit, and Coursera, a Bay Area start-up—often with little input from faculty members.

20 questions (and answers) about MOOCs « Dave's Educational Blog I was asked by the excellent Sheryl Nussbaum-Beach to speak to her PLP class about MOOCs, and, while we had what i thought was an excellent forty minute chat, there were tons of comments that i never had the chance to address. As i look over the questions they asked, I see that in answering their questions i have a chance to lay out many of the thoughts that I have had about MOOCs while they have been all the rage here on the internet in the last few weeks. I opened the discussion with a quick personal intro to my contribution to the MOOC discussion and then we moved to Q & A. Feel free to skim along and pick up the part of the discussion that interests you. Intro Edtechtalk and community – 2005 In 2005 Jeff Lebow and I started edtechtalk.

OERu 13.10 report From WikiEducator Group photo of the attendees[1] at the 2nd meeting of OERu anchor partners on the occasion of the official launch of the OERu. The second meeting of OERu anchor partners and international launch of the OERu collaboration was hosted by Thompson Rivers University on 31 October and 1 November 2013 in Kamloops, Canada. Sir John Daniel, open learning visionary and former UNESCO Assistant Director General of Education, was the guest of honour and formally launched the OERu website on 1 November 2013. As an open project, all accredited post-secondary institutions are free to join the OERu international partnership.