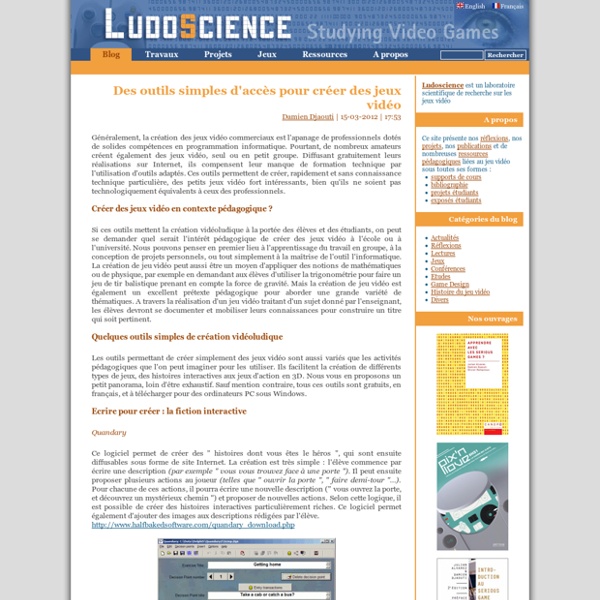 BEAT THE CENSOR - an illustration of different censoring attempts SCORE: 0000 | Users connected: 000 Why do some countries censor the internet? Frankly we do not know and you would need to ask the respective governments why they are doing it. Research FUSE Labs - Kodu Game Lab An overview of Kodu. (Click to play) Kodu lets kids create games on the PC and Xbox via a simple visual programming language. Kodu can be used to teach creativity, problem solving, storytelling, as well as programming. Anyone can use Kodu to make a game, young children as well as adults with no design or programming skills.

Gamification or Serious Game: What's the difference? Just as family members share similar DNA, gamification and serious games share similar traits. Both are born of game thinking, mechanics, and design. Both are used to solve problems. And both engage users. But just like family members, gamificaton and serious games have their differences. Let's take a closer look at each of these game-based techniques to see how they differ and how they can be used.

processing : black hole pong Robert Unwin summer project 2010 This game is a light-hearted remake of the old classic, except with a cosmic twist! The original game of Pong involved each player controlling a paddle which they would use to bounce a ball back to their opponent, in the hope they would miss. Each time the ball touched the opponent's side of the screen, the player would win a point. Toca Builders Dear Parent, Meet the Builders! They’re a nifty bunch here to help you realize your wildest construction dreams and plans. The Builders are at your command: build, paint, tear down and PLAY – Toca Builders is as much a tool for creating constructions as it is a world in which to create your own fantastic games. Toca Builders is the first toy for me as a Play Designer to oversee from start to end, and with the newcomer’s ambition I feel we’ve pushed the envelope of what a Toca Boca toy can be.