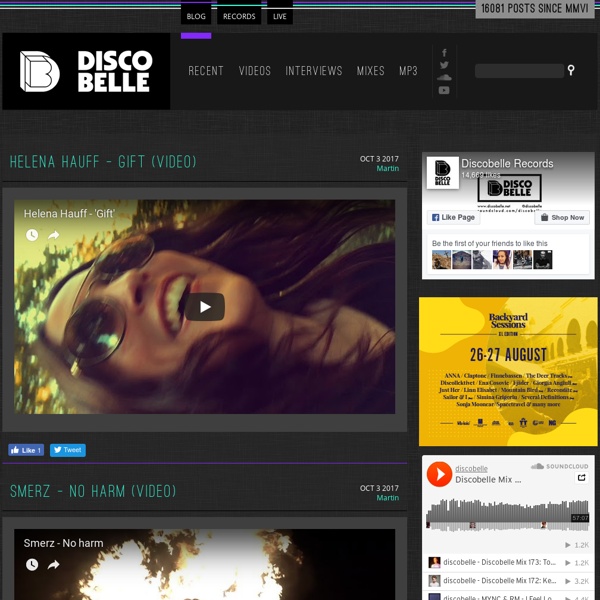 Scottish electronic musician, Graeme Shepherd, better known by his stage name Grum, burst on to the then burgeoning ‘Blog House Electro’ scene in 2007 and injected a heavy dose of Disco and vintage sounds while the likes of Justice, MSTRKRFT and Crookers where dominating the fresh-faced movement. With a debut album that earned comparisons to Daft Punk’s Discovery and Mylo’s Destroy Rock & Roll plus being named iTunes ‘Best Electronic Artist of the Year,’ Grum is no stranger to illustrious accolades. His sophomore LP, Human Touch is forthcoming (on his own, Heartbeats imprint) and thankfully, I was able to catch up with the man to ask a few questions about the project: RiCHARD.GEAR: Where are you currently based and where was this album produced? GRUM: I’m currently based in Glasgow, but I produced most of the album when I was living in Leeds in 2012.RG: What was the inspiration for this album, could this LP be considered a ‘concept album’?

Listen to this BeatListen to this Beat Quite a while has passed since our last Basic Physics track. There are plenty of remix of Lana’s Young And Beautiful, but this remix by Sound Remedy definitely stands out from the crowd. Download: Lana Del Rey – Young And Beautiful (Sound Remedy Remix) Afrojack uploaded a trailer to his upcoming album Forget The World. A electronic and hip hop music blog featuring only sick songs Posted in Bangin, Chill by nick | Tags: Chill House, Deep House, House, Mr Probz, Music Video, Robin Schulz German-based producer / DJ Robin Schulz is making noise thanks to a collection of viral tracks that have seen some international success. He's becoming a household name in multiple countries and is spreading fast everywhere else, so we thought it was overdue to do a Robin Schulz catchup post to bring readers up to speed through some of his best remixes and originals, including his new music video and the announcement of his first US tour ever. First we are starting with the release that kicked things off, his remix of "Waves" originally by Dutch soul singer Mr. Probz released late last year.

soundcloud.com/sonofkick Search Discover Help Site Info Privacy Terms Ad Opt-Out A part of the People / Entertainment Weekly Network. Filter Stream Disco Demons twentyfourhours A electronic and hip hop music blog featuring only sick songs Posted in Bangin, Video by nick | Tags: 2014, Chance the Rapper, Hip-Hop, LIVE, Lollapalooza Chance the Rapper made a legendary return to his home city of Chicago after gaining a monstrous global following as he played a huge set at the trend setting Lollapalooza music festival. This Sunday's set was a very special one for the rapper as him and his Social Experiment band went through an impressive collection of all the favorites from his popular mixtapes and even managed to slip in a few unreleased new tracks.

The 100 Most Beautiful Songs in the World, According to Reddit A thread in r/AskReddit on Monday posed the question, "What is the most beautiful song you've ever heard?" User McSlurryHole challenged the community: Think to yourself, what is the most beautiful song you have ever heard, im not talking about your favourite song, or the most technical, or something that made you cry, I just want to know the song that made you say "holy shit... I could die to this" After 9,634 comments, a strong list was assembled. Subsequently, Redditor Dansecaribe collected the 100 most upvoted songs into a public Spotify playlist.

20 Albums To Begin A Journey into Jazz This is for you if you want to a journey into listening to jazz more seriously, or if a friend asks you what jazz records they should listen to in order to appreciate it more fully. It's no good people starting to listen to jazz on the margins; it's like giving a ten year old, Tolstoy's 'War & Peace' to read, chances are they will not make it past the first page. There are some jazz fans that can be awfully snooty about the music they love, they almost try to turn it into a club that refuses to let in new members. So we decided to put together a list of the 20 albums to start your collection with. Top DJs of 2014 So, here we are again. Another year gone, another inconceivably vast number of DJ sets played and heard. Another 650,000 words (or thereabouts) from us on who and what we think is cool, and now, with our annual DJ poll, another chance for you, our readers, to join the conversation. Perusing the results, you may be struck by a particular thought: almost every person on this list is huge.