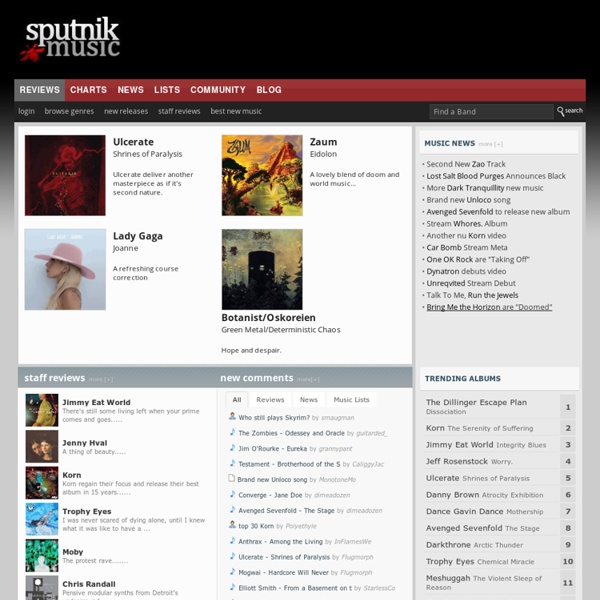 John Peel’s BBC Festive Fifties 1976-2003 John Peel’s Festive Fifty 1976 1. Led Zeppelin – Stairway To Heaven 2. Journal de sljiva – My Top 50 Electronic Music Albums Of The 2000s – Last Somewhat late comes my list of the best albums of the last decade, but I was occupied alot the last couple of months and was rarely even online, plus I wanted to carefully check out all the albums released in 2009 to determine if something is suitable for the list (haven't unfortunately found anything exceptionally good), so better late than never I guess. I just want to say that in my opinion this last decade was amazing when it comes to electronic music. Technology really created a space for further experimentation and innovation and a lot of talented producers appeared who had an ability to fill up that space. Some others didn't even had to utilize the new technology to unleash the creativity which expanded and redefined some older styles and created some new ones. As of genres, I hardly decided to include them, but they could cause a confusion so let's clear this right now.

Selling MP3s? You should have stuck with CDs What’s the difference between selling a secondhand music CD and transferring ownership of the same songs bought from iTunes? Not much, you’d think - except one’s illegal, according to a New York court. Earlier this month, ReDigi.com, which sells “used” digital music files, was found to violate copyright law after record label Capitol Records claimed the web-based service infringed reproduction rights. While many people are familiar with browsing and buying used vinyls or books, this recent decision hinders methods of virtually sourcing secondhand digital files, even if ownership of a song or track is completely transferred to a different person, and no lasting copies are made. To understand the decision in Capitol Records, LLC v ReDigi Inc. it is useful to review developments in music distribution over the past 30 years and consider how concepts of property and ownership apply to digital copyright works.

The 60 Best Songs Ever Written About New York City For the past few weeks we’ve been locked in the basement at Yankee Stadium, subsisting on nothing but Bergen Bagels, listening to the best songs about New York City through headphones endorsed by Lou Reed. Our mission: to come up with a list of the 60 best songs ever written about our city, songs that best capture what it’s like to live, love, struggle, and exist in the sprawling, unforgiving, culturally dense metropolis we pay too much to call home. We started by agreeing on the songs we shouldn’t include — naked and clunky stabs at new New York anthems that fall flat and ring inauthentic, like Jay-Z’s “Empire State of Mind,” U2’s “New York,” and Taylor Swift’s “Welcome to New York.” Instead, we focus on tracks that are so New York, and so good, they can’t be denied. Here they are.

Andy Ihnatko's Celestial Waste of Bandwidth (BETA) For maximum effect, you should watch these two videos in sequence. It’s the same aria in the same 2009 Metropolitan Opera production of “Tales Of Hoffman” being sung two very different ways. Today, opera has pretentious undertones that scare people away. Okay, yes, it’s probably the undertones and all of the foreign speakey-talk. I myself didn’t really get into opera until I learned that reading the libretto beforehand wasn’t considered cheating. Anyway, it’s a shame that so many people don’t give opera a try.

Indietracks - an indiepop festival: Indietracks interview #5: The Magic Theatre Today we're chatting to Dan Popplewell and Sophia Churney from new Elefant Records signings The Magic Theatre, who will be making their first live appearance at this year's Indietracks! Their debut album 'London Town' (2010) was a time-travelling love story bursting with melodic sunshine/baroque pop, featuring orchestral recordings with The Slovak Radio Orchestra and the Estonian Philharmonic Chamber Choir. They've just put the finishing touches on their second album, to be released on Elefant in the autumn and preceeded by a four track single in June/July. As front people in Ooberman, Dan and Sophia released a string of acclaimed and ambitious albums, enjoyed chart hits and and were championed by John Peel, Blur's Graham Coxon and BBC Radio's Mark Radcliffe .

Paul's Extreme Sound Stretch by Nasca Octavian PAUL Introduction This is a program for stretching the audio. It is suitable only for extreme sound stretching of the audio (like 50x) and for applying special effects by "spectral smoothing" the sounds. Battle Of The Flagships (50+ Headphones Compared) THE BATTLE OF THE FLAGSHIPS continued... For nearly five years, the AH-D7000 held the title of heavyweight champion in Denon's headphone line until it was discontinued in 2012. The AH-D7100 is Denon's newest flagship. Writing or speaking about streaming music screwing artists? I really like Aimee Mann’s music, but her recent interview in which she gave her views on streaming music bothered me. “My record isn’t on Spotify,” Mann told the Telegraph. “People may be outraged, but artists don’t make money from Spotify.” Artists don’t make money from Spotify. A phrase that crystallises what may be the most important debate in the history of digital music: whether streaming music services can pay off for artists – and more widely, whether they can turn a profit and build a sustainable business for themselves and the music industry.

Featured Song Recordings, Top Karaoke Songs Here you get your chance to sing from a special selection of songs and get some good exposure! Sing any of the songs listed and we'll post your recording here within a few minutes. You can see all the songs you can choose from on the Featured Songs page in the Record section. National Librarian Day! Find the nearest librarian and give them a hug today! The Decline and Fall of the Top 10 The impact of technology on the music business is well understood, but it is also having a dramatic impact on the music buying population, which in turn is changing the face of mainstream music. Digital music has so far been a journey for the more engaged, technology savvy music fan. Some of these have discovered free music, others a la carte, others streaming. All of these behaviours have eaten away at sales of the music industry’s core product: the album.

Glasgow Apollo / Who Played When The Bands Who Played at the Green's and Apollo We are trying to create a definitive list of all the bands that played at the Green's/Apollo and to provide dates, ticket stubs, reviews and setlists. If you can add to our list or spot an error please let us know. Just click on the year you want to see gigs for, or if you are brave you can see all of the gigs we currently have by clicking the "All" link. Any pictures, ticket stub scans, press clippings etc from the Green's/Apollo would be much appreciated, please send us an email. The image on this page is from an AC/DC concert at the Apollo in October 1979.

List of Peel sessions Wikipedia list article Where an artist has recorded more than one session under different names then both names have been listed. 0–9[edit] A[edit] AC/DC recorded a Peel session in 1976.