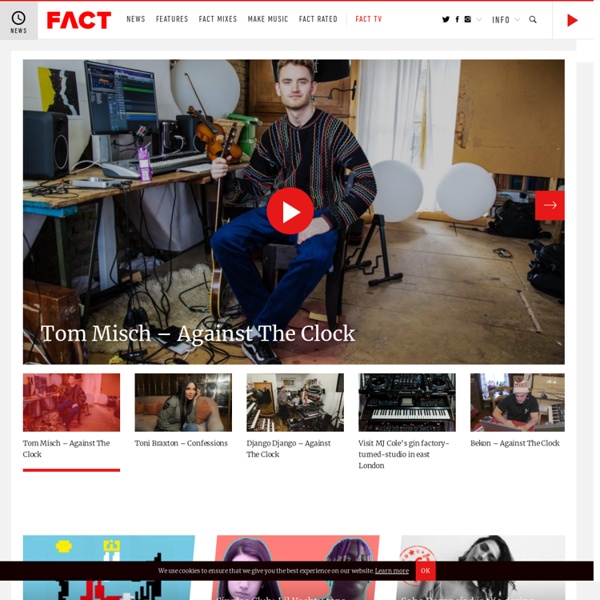 Kingdom- That Mystic EP Yo! Grab Kingdom's 'That Mystic' EP, released on L-vis and Bok Bok's Night Slugs and digitally on A-Trak and Nick Catchdub's Fool's Gold Records, labels that continue to produce some of the freshest artists around. Kingdom is a dj/remixer/producer originally from right outside of Boston, where he grew up as a punk rock kid, then experimented in electronic bands and listened to jungle and house in his high school years. Residing in Brooklyn, NY for the past ten years, it's no wonder that his sound is influenced by r&b and hip hop as well (sampling Beyonce and Cassie below).

this song is sick Posted in Bangin, Video by nick | Tags: 2014, Chance the Rapper, Hip-Hop, LIVE, Lollapalooza Chance the Rapper made a legendary return to his home city of Chicago after gaining a monstrous global following as he played a huge set at the trend setting Lollapalooza music festival. This Sunday's set was a very special one for the rapper as him and his Social Experiment band went through an impressive collection of all the favorites from his popular mixtapes and even managed to slip in a few unreleased new tracks. This was truly something special as the love for his home city resulted in some unreal chemistry. Enjoy! Billionaire Boys Club Blog Our apologies for not updating the blog; we’ve been caught up with the latest BBCICECREAM releases. We know this is late, but better late than never! SpongeBob SquarePants threw Pharrell a 41st Birthday celebration at Cipriani’s on Wall Street. The space was transformed into Bikini Bottom and featured special guests such as SpongeBob, Patrick, Squidward, and Celebrity friends. Check out the decor and pictures after the jump!

Late Night Tales Late Night Tales. The series has been met with critical acclaim,[2][3] with GQ Magazine praising Late Night Tales as "The Rolls Royce of compilations".[4] 2011 saw the label celebrate their 10th anniversary with a box set including all albums to date.[5] Friendly Fires' compilation[6] released in November 2012 marked the 30th in the series. Albums[edit]

Articles: New Vocabulary Throughout a class of genres and micro-genres, there seems to be a new musical vocabulary emerging, one centered around the way vocals are being manipulated to create moods and atmospheres defined by their amorphous, often spectral nature. Ghost voices. It's something like what happened in the film Inception, the way music could be heard through layers of dreams. Teams vs Star Slinger – Punch Drunk Love If someone was to tell me that I am the new J Dilla, I would probably make them my friend for the rest of my life. Then, in some gross, vain music ritual, I'd have them repeat it to me every day. This, surely, is what Star Slinger must feel. Why does every review refer to him as 2011's answer to J Dilla?

Witch house (music genre) Witch house is an occult-themed dark electronic music genre and visual aesthetic that emerged in the late 2000s. The music is heavily influenced by chopped and screwed hip-hop, dark ambient soundscapes, industrial and noise experimentation, and features use of synthesizers, drum machines, obscure samples, droning repetition and heavily altered, ethereal, indiscernible vocals. The witch house visual aesthetic includes occult, witchcraft, shamanism and horror-inspired artworks, collages and photographs as well as significant use of typographic elements such as Unicode symbols.[1][2] Many works by witch house visual artists incorporate themes from 60s, 70s and 80s cult and obscure horror movies,[3] the television series Twin Peaks,[4] and mainstream pop culture celebrities. Many artists in the genre have released slowed-down remixes of pop and rap songs,[17] or long mixes of different songs that have been slowed down significantly. Egedy described witch house as follows:

ART / DESIGN « LeBruitDesGarçons The vivid city of Los Angeles is interpreted by photographer Nicholas Alan Cope in this photography book titled Whitewash, revealing forms, surfaces and volumes in visually stunning black and white images. His subjects of minimalist urban architecture stand out as an irony to what we typically perceive of the glamorous sprawling city on the surface … Lire la suite WATCH CARA DELEVINGNE UNZIP FOR i-D MAGAZINE For its latest issue, i-D Magazine worked with photographer Tyrone Lebon. Album Reviews: Egyptrixx: Bible Eyes The reputation of David Psutka's Egyptrixx among beat music cognoscenti was quickly cemented last year by tracks like "Battle for North America" and "The Only Way Up", the latter being one of the brightest cuts to come out of a packed-with-hits Night Slugs camp. His willingness to take the basis of UK funky into techier, more austere turf meant he could stake a potential claim as a progressive-minded genre-tweaker. Still, all through his previous peaks, you could hear his music stretching, testing itself, reaching for something ahead even as it planted a couple solid feet directly in the midst of a spotlit movement.