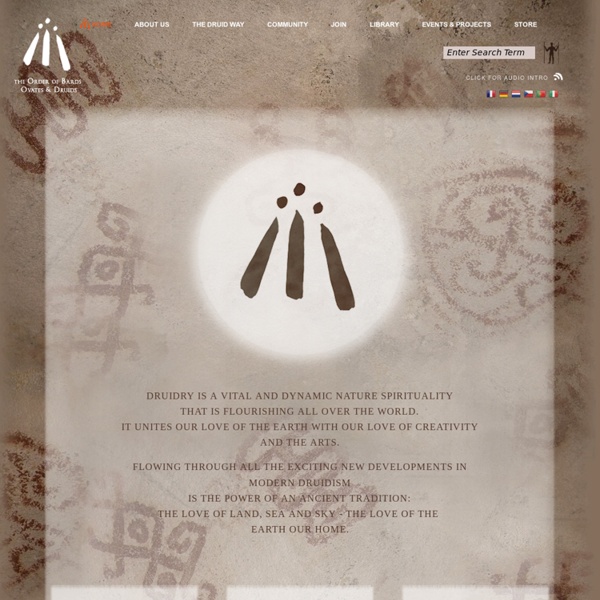 Welcome to the website of the Druid Grove, the Order of Bards, Ovates and Druids. Druidry Courses and Druidry Training We specialise in druidry courses & druidry training. Here you can learn about druids and druidism. The Order of Bards Ovates & Druids Druidry is a vital and dynamic nature spirituality that is flourishing all over the world.

Fellowship of Wandmakers On this page are listed some of the other wandmakers I have found on the web. Each wand maker's work is very different. Some produce their wands with a good deal of ceremony and magic, while others aim more humbly to produce beautiful works of craft, leaving the enchantment up to the purchaser. Freemasons of California - Mill Valley Lodge #356 The set of First, Second and Third Degree Tracing Boards represented on this page were the gift of Wor. Bro. Thomas D.

Anu In Sumerian mythology, Anu (also An; from Sumerian *An 𒀭 = sky, heaven) was a sky-god, the god of heaven, lord of constellations, king of gods, spirits and demons, and dwelt in the highest heavenly regions. It was believed that he had the power to judge those who had committed crimes, and that he had created the stars as soldiers to destroy the wicked. His attribute was the royal tiara. His attendant and minister of state was the god Ilabrat. Sumerian religion[edit] Ur III Sumerian cuneiform for An(and determinative sign for deities see: DINGIR) Fog Catchers "If we can help generate alternative sustainable economic activities, we will be increasing the community’s chances for a viable livelihood in the face of climate change." Juan José RodríguezThe Nature Conservancy’s Coasts and Deserts coordinator by Marcela Torres Vea también en español Have you ever seen a desert turn into a lush green valley bursting with life? This is exactly what happens in the coastal deserts of Peru every year, when oasis-like pockets of vegetation, called lomas, bloom between July and November thanks to the moisture they capture from fog.

Sri Ramana Maharshi on Self-Enquiry Disciple: What is the difference between meditation and Self-enquiry? Master: Meditation is possible only if the ego is retained; there is the ego and the object meditated upon. This method is indirect. However, if we seek the ego-source, the ego disappears and what remains is the Self. Amun "Amen Ra" redirects here. For the Belgian band, see Amenra. Amun (also Amon (/ˈɑːmən/), Amen; Ancient Greek: Ἄμμων Ámmōn, Ἅμμων Hámmōn) was a major Egyptian deity. He was attested since the Old Kingdom together with his spouse Amaunet. With the 11th dynasty (c. 21st century BC), he rose to the position of patron deity of Thebes by replacing Monthu.[1] After the rebellion of Thebes against the Hyksos and with the rule of Ahmose I, Amun acquired national importance, expressed in his fusion with the Sun god, Ra, as Amun-Ra.

Clarity on Spirit Science (A MUST SEE!) There have been a lot of questions recently about Spirit Science and it’s evolution. What are we up to, where are we going. Some people had made up some ideas as well about Spirit Science becoming Cult-Like and a new Religion, which Jordan and I thought was ridiculous. Witchcraft World - Witchcraft Spells Wiccan Spells Spells are used in witchcraft to channel the power of the Wiccan God and Goddess to initiate positive change and for resolution of problems. It is important to know what phase the moon is in while practicing spells and witchcraft. For example, it is best to do spells of a banishing or destructive nature in the waning of the moon, when it is dark and the new moon is about to wane. Examples of such spells are the banishing of negative energy, hope for the end of illness and also agricultural rites, to ward off destructive insects. Constructive spells

Iran and Persia - Are They the Same? The names Iran and Persia are often used interchangeably to mean the same country. Iran is the legal name. Persia, was an ancient kingdom within Iran. Ahura Mazda Ahura Mazda (/əˌhʊrəˌmæzdə/;[1]), (also known as Ohrmazd, Ahuramazda, Hourmazd, Hormazd, and Hurmuz, Lord or simply as spirit) is the Avestan name for a higher spirit of the Old Iranian religion who was proclaimed as the uncreated spirit by Zoroaster, the founder of Zoroastrianism. Ahura Mazda is described as the highest spirit of worship in Zoroastrianism, along with being the first and most frequently invoked spirit in the Yasna. The literal meaning of the word Ahura means light and Mazda means wisdom. Ahura Mazda first appeared in the Achaemenid period (c. 550 – 330 BCE) under Darius I's Behistun Inscription. Until Artaxerxes II (405–04 to 359–58 BCE), Ahura Mazda was worshiped and invoked alone.

Kid's Coloring, Drawing, Stickers & Painting Activity ABCya is the leader in free educational computer games and mobile apps for kids. The innovation of a grade school teacher, ABCya is an award-winning destination for elementary students that offers hundreds of fun, engaging learning activities. Millions of kids, parents, and teachers visit ABCya.com each month, playing over 1 billion games last year. Apple, The New York Times, USA Today, Parents Magazine and Scholastic, to name just a few, have featured ABCya’s popular educational games. ABCya’s award-winning Preschool computer games and apps are conceived and realized under the direction of a certified technology education teacher, and have been trusted by parents and teachers for ten years. Our educational games are easy to use and classroom friendly, with a focus on the alphabet, numbers, shapes, storybooks, art, music, holidays and much more!