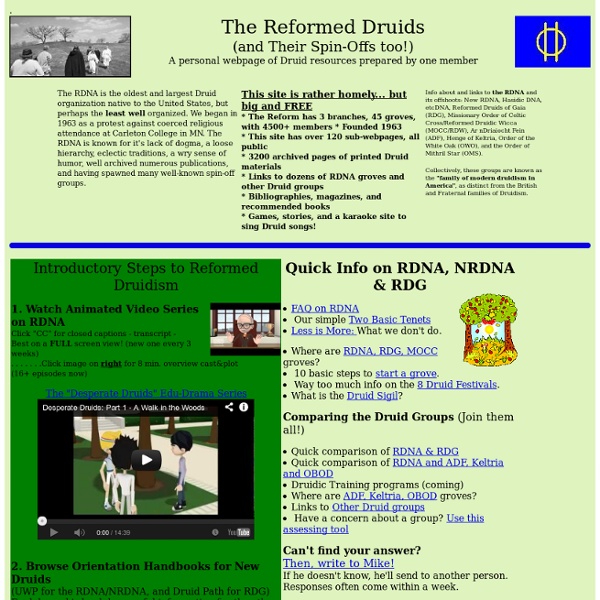 Ár nDraíocht Féin: A Druid Fellowship Earth Mysteries: Stonehenge and the Druids, Salisbury Plain, Wiltshire - Earth Mysteries Stonehenge and the Druids, Salisbury Plain, Wiltshire After centuries of neglect in the wake of first Roman and then Christian suppression, the Druids were rediscovered during the Renaissance when the revival of interest in ancient Greek and Latin writers brought attention to the works of Pliny, Tacitus, and Julius Caesar and their descriptions of the Celtic world. First in France in the sixteenth century, and then in England, the ancient Celts (or Gauls as they were known in France) and Druids were claimed as historical ancestors. By the seventeenth century, a new romantic image of Druids began to emerge in French and English literature. In England as early as 1624 the Celtic warrior queen Boudicca is credited by Edmond Bolton with building Stonehenge as her monument. Druids celebrating the summer solstice at Stonehenge Winston Churchill (center) hosts the Ancient Order of Druids at Blenheim Palace on 15 August, 1908

The Alchemist's Cookbook Fire! Earth! Wind! Water! No, this isn't another bad episode of Captain Planet. These four forces of nature from the Greek were once connected in a system of beliefs and rituals known as alchemy. Alchemy was a philosophy that investigated the mysteries of life, specifically inanimate objects of nature. The substance they believed that would transmute lead into gold was known as The Philosopher's Stone. There were also connections between days of the week, planets, and metals, as follows, The days of the week were named after the planets: Sunday for the Sun, Monday for "mooneday" (old English), Tuesday for Tyr (Mars), Wednesday for Woden (or Odin, Mercury), Thursday for Thor (Jupiter), Friday for Frigga (wife of Mercury), and Saturday for Saturn. Accordingly, different chemicals processes were associated with the 12 signs of the zodiac, Alchemists also used images of serpents. A three-headed serpent represented the Philosopher's Stone. References: 1. TAlC/bc

Rune Meanings - The Elder Futhark I work with the "Elder Futhark", the runic alphabet which is a composite of the runic symbols most commonly used in northern Europe. The names of the runes of the Elder Futhark are speculative recreations of what linguists call "proto-Germanic", which stems from "proto-Indo-European". There are many versions of the runic alphabets. Each has variations in names, shapes, esoteric meanings and magical uses. One should not mix futharks, or the intent or meaning becomes confused. The runes are broken into three sections or groups of eight, called aett (aettir, plural). First the rune name is given, then its phonetic value, its symbolic image, and finally the esoteric meaning used in divination. Fehu(F: Domestic cattle, wealth.) Uruz: (U: Auroch, a wild ox.) Thurisaz: (TH: Thorn or a Giant.) Ansuz: (A: The As, ancestral god, i.e. Raidho: (R: Wagon or chariot.) Kenaz: (K: Beacon or torch.) Gebo: (G: Gift.) Wunjo: (W or V: Joy.) Hagalaz: (H: Hail.) Nauthiz: (N: Need.) Isa: (I: Ice.)

Opening and Meditating on Your Clairaudience Points Meditating on your centers of clairaudience; also known as "psychic hearing" will empower your astral hearing. This is useful when communicating with Demons. Just relax and focus on each center, visualizing each one as a bright star. Spend a few minutes with each one. To open each of these minor chakras, just focus on them and visualize them opening up like a star and getting brighter. This may have to be done for several meditation sessions before they are permanently opened. As you advance, you can do "chakra breathing" where you absorb energy with each inhale and slightly expand and brighten each chakra you are focusing on, upon the exhale."