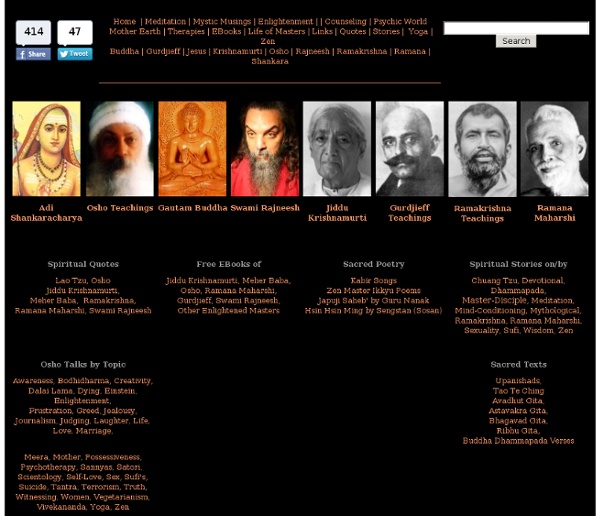 The Alchemist's Handbook CHAPTER V p.47 How are herbs related to the stars? Can such a thing be true? Fiction on Indian spirituality popular in Germany New Delhi, February 28: A fictional story that explores themes like life after death, healing, commitment and faith in the master among others is picking up popularity in Germany, says its Indian author Ruzbeh N Bharucha. "It is amazing because a backpacker who happened to be travelling to India picked up a copy of my book and loved it so much that she gave it to her publisher back home in Germany. They thought it would sell a few copies but the number turned out to be 20,000 and more," says Barucha. The author''s book "The Fakir" published in 2007 tells the story of a hippie who wants to commit suicide and happens to meet a holy man who guides him through life and existence. Barucha, who recently launched a sequel "Fakir- the journey continues" - says spirituality is a way of life. "Nowadays we complicate it with strange dogmas.

Individual Healing: Ancient Ayurveda as a healthy modern lifestyle Ayurveda is the most holistic medicine system existing Dhanvantari—Hindu God of Ayurvedic Medicine Ayurveda is a leading alternative medicine and probably the most holistic medicine system existing. It translates to “Science of Life” and with its 5 000 years of history Ayurveda is also the oldest known healing science — preserved until today in India, where it stems from. It was established by the same great Vedic seers and sages that invented Yoga and Meditation. So 3 000 years ago Europe was still in Bronze age, healing diseases by trying to get bad spirits out of the body with excruciating methods like trepanation because diseases where thought to be sent from gods or similar so there wasn’t much men could do about them.

Grimoar - Occult Texts Welcome to our library Welcome in our occult texts library. It contains 2052 unrevised texts in pdf, doc and other formats. Librarians are responsible neither for text redaction nor for their contents. It is possible that some of the texts are still under copyright. First British Congress on Medicine and Spirituality Physician specializing in Digestive System Surgery. Medical degree from the Federal University of São Paulo – Unifesp. Full Professor of Physiology in courses in Biology, Physiotherapy and Pharmaceutics at the University of Santa Cecilia at Santos (Universidade Santa Cecília de Santos – UNISANTA), State of São Paulo. Associate Professor of Health and Spirituality in the course for Gerontology at UNISANTA and member of the Brazilian Spritist Medical Association (Associação Médico-Espírita AME) Santos, São Paulo. Author of several books.

Pre-Buddhist History People of the Indus Valley Civilisation (also called Harappan Civilisation after the major city of Harappa) were mainly farmers, although recent finds are indicating a well developed culture. Eminent scholars have concluded that the origins of the practices of yoga and meditation can be traced to the Indus Valley civilisation. An image of a human figure has been found that is seated in a cross-legged posture, hands resting on the knees and eyes narrowed - clearly suggesting meditation. V-Library - Veritas The V-Library (Veritas Library) is an online collection of e-books by various authorities in the field of metaphysics and the occult. All the e-books are free for use and are public domain resources. "The idea for this came to me when seeing the Bob Hendricks Memorial CM Library on OccultForums and after seeing the Sacred Magick website fall victim to bandwidth strangulation. I figured veritas could use a Library for each of its varied subjects. A post will be made in Psionics, Body Energy Arts, Magick and Spirituality after I find enough files to make a decent post.

Confucianism By Confucianism is meant the complex system of moral, social, political, and religious teaching built up by Confucius on the ancient Chinese traditions, and perpetuated as the State religion down to the present day. Confucianism aims at making not simply the man of virtue, but the man of learning and of good manners. The perfect man must combine the qualities of saint, scholar, and gentleman.

Message from masters is a site which discusses about the famous people who taught philosphy like buddha,jk,osho by anupampedarla Mar 6