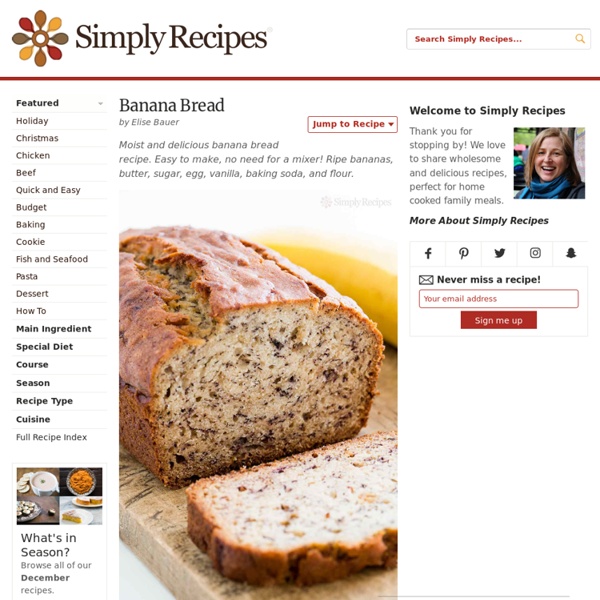 Photography Credit: Elise Bauer This banana bread has been the most popular recipe on Simply Recipes for over 10 years. Thousands of people make it every day. Why? Because it really is the best banana bread recipe, period. You can mix everything in one bowl, you can vary the amount of sugar or bananas. The beauty of this banana bread recipe is you don’t need a fancy mixer! You can toss in a cup of chopped nuts, raisins, or chocolate chips if you want, or put the batter into muffin tins and make banana nut muffins instead. I was given this banana bread recipe years ago from my friend Heidi H, who, many years before, had begged the recipe from a ski buddy’s mother—Mrs. Here’s a quick little video I put together on how to make this banana bread, please check it out! Banana Bread Recipe Print No need for a mixer for this recipe! The best bananas to use for banana bread are those that are over-ripe. Ingredients Method 1 Preheat the oven to 350°F (175°C), and butter a 4x8-inch loaf pan. Hello!

Cochinita Pibil Recipe If for some reason you don’t eat all your cochinita pibil at one sitting, it will keep for several days in the fridge. Achiote is an essential ingredient for this recipe, there is no substitute. Method 1 The night before or the morning before you plan to serve this, mix the orange and lime juice with the achiote paste and salt in a blender until combined. Be sure to rinse the blender soon afterwards, as the achiote stains. Chocolate Chocolate Chip Banana Bread I always have the best of intentions when I buy barely yellow bananas at the grocery store. I have visions of healthy breakfast shakes, peanut butter and banana sandwiches, and healthy mid afternoon snacks. Without fail the bananas turn brown and speckled. They start to mush and sink into themselves. They just become all around unsexy.

How to make the perfect pecan pie This week, in honour of Thanksgiving, I've finally been let loose on one of my favourite American desserts. Despite its heavenly combination of rich nuttiness and caramel sweetness, as a speciality of the south, pecan pie wouldn't have featured on the first Thanksgiving table. In fact, it didn't put in an appearance until the late 19th century. Chocolate Caramel Cheesecake - Mrs. Penguin Hellooooo, cheesecake. So I have to start out by talking about Orange is the New Black! I watched all of it in 3 days. Yeah, I don’t have a life. I laid around and watched it while stuffing cheesecake and cookies into my face. Green Bean Recipes - Toasted Almond Green Beans Recipe This toasted almond green bean recipe is a holiday classic. It's also very simple to prepare and can be made ahead and reheated later. The almonds give the green beans a great texture, and make a basic vegetable side dish into something special.

Carrot Cake Recipe I set my sights on carrot cake this week. I suspect you've never made a carrot cake in this way before, and I'm here to encourage you to give it a go. Well, maybe. If you like your carrot cake delicate with a defined crumb, you'll actually want to pass on this one. This is an entirely different beast. in the kitchen with: rigetta klint’s Æblekage I was having lunch at an Italian restaurant last week when everyone at our table was attracted by the fig dessert on the menu. The waiter broke the news that it is too early for figs, but at the end of the apple season, so why not try an apple dessert. After her very popular beetroot pesto in March, Rigetta Klint, founder of Slow Fashion House, has shared her version of a traditional and very popular Danish dessert, æblekage. Translated into English it is “apple cake“, though you will see it is not exactly a “cake”. It is perhaps similar to an apple parfait! This version of the recipe makes the most of simple staples in the home: breadcrumbs, sugar, butter, and apples.

Roti Chicken I’m making a lot of my friends very, very happy by posting this recipe. Up until now, I’ve always blatantly refused to hand over my Roti chicken recipe (and rightfully so). There are certain things you just don’t share. Men, eyeliner and your secret recipes! But I was in a generous mood, so here it is! I have a deep-seated love for Surinamese food. Chocolate and Grand Marnier Banana Cake That’s what I’ve come up with after several attempts to produce a banana bread completely opposite in texture and flavor to the “traditional” banana bread – wet and sticking to your teeth, which is available, unfortunately, in almost every coffee shop throughout North America. My version is moist (don’t confuse with wet), fragrant, and chocolaty. My close friend, who spent most of her life in Budapest and Zurich and has very sophisticated taste as well as her own conception of what a dessert should be like, approved this cake. Makes one loaf, about 10 servings

Cinnamon Sugar Pull-Apart Bread I’m sorry. I know it’s Monday morning and you probably came here for some pretty pictures of food that you could glance at, and then move on with your day… and here I go thrusting warm, soft cinnamon sugar bread in your face. It’s not fair. I know it’s not fair. I know that now you’re craving cinnamon rolls, and cream cheese frosting and chili fries and hot dogs. Healthy Malaysian Food Blog & Food Recipes My oh my, look at these juicy Bak Kwa! Over the weekend, I spend my time spring cleaning the house, bake peanut cookies and making Bak Kwa (Barbecued Dried Meat). Chinese New Year (CNY) is just a week away! Before CNY, it is a tradition to spring clean our house to sweep away the old and any ‘ill luck’ to welcome the incoming good luck of the new year. Chinese New Year also known as Lunar New Year, celebrates the start of spring in China, which is also the 1st day of a new Lunar year. Bak Kwa, also known as rougan 肉干, is a Chinese salty-sweet dried meat product similar to jerky, made in the form of flat thin sheets.

Apple Banana Coffee Cake with Chocolate Chip Streusel The original recipe seemed huge, so I halved it. And I saw another blogger, Kristy using apple in this, so I followed suit, to add an apple to the batter. This recipe has been made by a lot of bloggers, just by googling you can find loads of them, but google without the apple word to find try-outs with the original recipe. Coffee cakes are cakes that are meant to be eaten with a cup of coffee, due to the sweetness, and they usually comes with streusel topping. So, don't be looking through my recipe searching for the coffee ingredient. No, it is non existent. Yummy Funny – Recipes – Relleno Negro (Black Turkey Stew) 1 - 3 kg turkey For the Recado Negro Paste (Black Chili Paste): 20 Chile de Arbor 5 whole cloves 5 whole all spice 2 sprigs of oregano 1/2 teaspoon cumin seeds, toasted 5 large cloves of garlic, peeled and charred 1 tablespoon coarse sea salt A little water 1 tablespoon olive oil 1 onion, chopped 1 garlic clove, minced 2 tomatoes, chopped Salt and pepper For the “Boot”: 1 lb (450 g) ground beef 1 tomato, seeded and diced 1 small onion, finely chopped 1 garlic clove, minced 1 raw egg 3 cooked eggs (separate whites and yolks) A few sprigs of Epazote, chopped* Salt and pepper Pavo en Relleno Negro is turkey meat stew cooked with a black paste made from roasted chiles, a local version of the mole de guajalote found throughout Mexico. The meat soaked in the black soup is also served in tacos, sandwiches and even in panuchos or salbutes. Preparation Bring a large pot of water to a boil.

Triple Banana Double Caramel Mini Cupcakes This is my basic and the most often used banana-bread formula. I do vary flavors, play with different flours, but I usually keep the proportions of the main ingredients the same. The bread is moist but not wet or sticky, just as good as any banana bread should be. I bake this batter as a loaf, cake layers or cupcakes, according to my mood or need. Let me explain the cupcakes’ weird name.

This was really good. it kept the bananas chunky which was a treat. by guttsu Oct 17