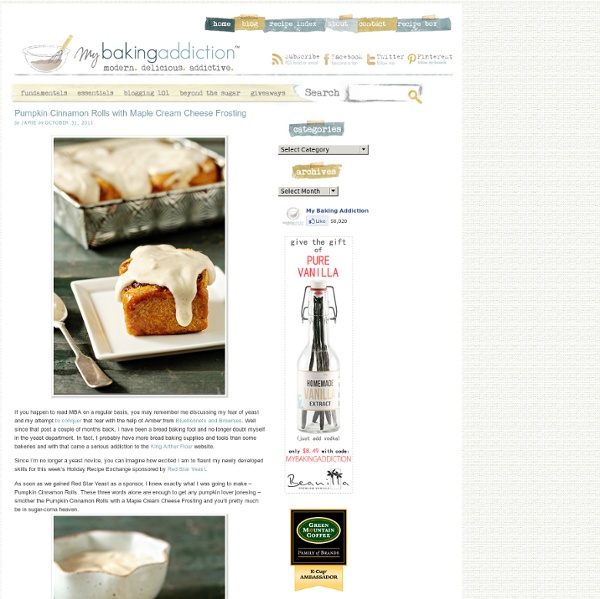 If you happen to read MBA on a regular basis, you may remember me discussing my fear of yeast and my attempt to conquer that fear with the help of Amber from Bluebonnets and Brownies. Well since that post a couple of months back, I have been a bread baking fool and no longer doubt myself in the yeast department. In fact, I probably have more bread baking supplies and tools than some bakeries and with that came a serious addiction to the King Arthur Flour website. Since I’m no longer a yeast novice, you can imagine how excited I am to flaunt my newly developed skills for this week’s Holiday Recipe Exchange sponsored by Red Star Yeast. As soon as we gained Red Star Yeast as a sponsor, I knew exactly what I was going to make – Pumpkin Cinnamon Rolls. These three words alone are enough to get any pumpkin lover jonesing – smother the Pumpkin Cinnamon Rolls with a Maple Cream Cheese Frosting and you’ll pretty much be in sugar-coma heaven. How To Participate Link Up Your Recipes: $159.79 Value.

The Best Buffalo Chicken Dip « partybluprintsblog.com SCORE BIG with this recipe! Surprise guests at your next party by whipping up this delicious dip featuring the flavor of Buffalo wings combined with 2 dreamy creams. Serve with a variety of scoopers (tortilla chips, crackers, celery). It will be a family favorite for sure. Ingredients 1 8oz. package cream cheese, softened½ cup sour cream2 cups cooked and cubed chicken½ cup hot sauce½ cup shredded Monterey jack cheese Holiday Dessert Decadence: Pumpkin Cheesecake with Chile Chocolate Ganache. - Something Edible Abstract: "Cheesecake." Just saying the word will cause some folks to gain two or three pounds. The rich, indulgent decadence of cheesecake is my dessert Achilles' Heel; If I'm in for one piece, I'm usually in for two.

Hasselback Garlic Cheesy Bread Hasselback Garlic Cheesy Bread First thing: this Calphalon Giveaway ends on Friday! Enter enter enter! Second thing: this bread is the bomb. Apple Walnut Cinnamon Rolls Apple Walnut Cinnamon Rolls Another over the top cinnamon roll filled with shredded apples and chopped walnuts and smothered in cream cheese icing with a hint of coffee, yeah they are GOOD! These are rich and delicious perfect for Christmas morning. I used to buy canned cinnamon rolls for Christmas morning, but finally I learned to make homemade and they are so much better and actually they don’t take too long to make.

Cinnamon Sugar Pull-Apart Bread I’m sorry. I know it’s Monday morning and you probably came here for some pretty pictures of food that you could glance at, and then move on with your day… and here I go thrusting warm, soft cinnamon sugar bread in your face. It’s not fair. I know it’s not fair. I know that now you’re craving cinnamon rolls, and cream cheese frosting and chili fries and hot dogs. Calzone! Uh-oh…this calzone shouldn’t be a calzone. Nope. It totally should be a picture of a pizza…topped with layers of ricotta, melted mozzarella, cubes of roasted butternut squash and broccoli rabe. That was the plan. This pizza was supposed to convince me that broccoli rabe isn’t this gross, bitter leaf situation…well that failed.

Thanksgiving Week Day 7 - Mini Pumpkin Tarts I had a bit of a dilemma about what type of dessert to share for the last day of Thanksgiving Week. I really wanted to create a big show-stopping dessert that would impress the pants off your guests. But then I realized that after a huge feast, most of your guests will already be bursting out of their pants anyway, and revealing a big dessert at the end of the meal could elicit more groans than cheers. Cheesy Puff Pull Apart Bread I made plans for you this weekend. See this bread? You’re going to make it. And you’re going to like it too. Like everyone else who owns a computer, I feel in love with the cinnamon version.

Nutella Cinnamon Rolls May 10, 2011 | Print | E-mail | Filed under bread, nutella There are some days that I just lose my appetite. It might be because of my mood, or that nothing sounds good, or that I’m in a food rut again and need to spice things up a bit. When my appetite comes back though, what I’m inevitably craving is some sort of comfort food. Yesterday happened to be one of those days, and by the end of the day all I could think about was a warm cinnamon roll fresh from the oven. Death By Oreo Cupcakes They are probably the best Oreo cakes I have ever tried. A lot of cake's that I have experimented with before are like a vanilla cake with bits of Oreo in them, which didn't really give them enough Oreo flavor. But these were a lot better. I used a dark chocolate fudge cake mix instead of just a regular chocolate cake mix, which went really well with the cookies and gave the cakes just a little more flavor.

Candy Cane Blossoms Too darn cute. I am the first to admit that I am a sucker for cute packaging and anything "Holiday themed" as evidenced in earlier posts. I saw these candy can kisses hit my local CVS right after Halloween. Normally I would have made some gripe about it being too early to put out Christmas Candy, but since they were so cute, I bought a bag and put it in my pantry to be saved until today.

Homemade Nutella Recipe If you ask me, Nutella should be considered one of the four main food groups. This chocolate-hazelnut spread has it all: healthy fat and protein from nuts, heart-healthy antioxidants from the dark chocolate, a touch of sweetness to fulfill that…um…sugar requirement…okay, so it’s not quite ready for a starring role on the food pyramid. Who cares, when it tastes so good?