Coffee Break with Liz and Kate 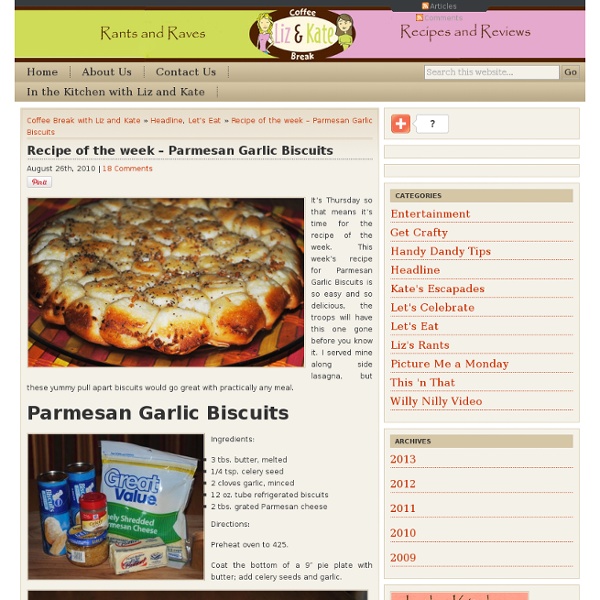 It’s Thursday so that means it’s time for the recipe of the week. This week’s recipe for Parmesan Garlic Biscuits is so easy and so delicious, the troops will have this one gone before you know it. I served mine along side lasagna, but these yummy pull apart biscuits would go great with practically any meal. Ingredients: 3 tbs. butter, melted1/4 tsp. celery seed2 cloves garlic, minced12 oz. tube refrigerated biscuits2 tbs. grated Parmesan cheese Directions: Preheat oven to 425. Coat the bottom of a 9″ pie plate with butter; add celery seeds and garlic. Cut each biscuit into quarters. Arrange biscuits on top of butter mixture. Sprinkle with Parmesan cheese. Bake for 12 – 15 minutes. Other recipes Bookmark & Share Filed under: Headline, Let's Eat · Tags: better home magazine, coffee break, coffeebreak, easy biscuit recipes, food, parmesan garlic biscuits, pull apart biscuits, recipes

Pinterest Is Not “Playing Dumb” About Making Money It seems like everyone’s discovered Pinterest this week! Alongside the countless posts dissecting its userbase over, sideways, and under have been a series of stories about how it’s “secretly” “monetizing” — a fact unearthed when LLSocial revealed that the startup was using a service called SkimLinks in order to drive affiliate revenue from purchases that originated on Pinterest. Some reporters ( ourselves included ) used this opportunity to imply that Pinterest had funded itself through affilate revenue for two years and then ditched the service after it received serious venture capital — provoking an interesting counterpoint article in the WSJ about “Pinterest’s Rite of Web Passage—Huge Traffic, No Revenue.” The Atlantic’s Alexis Madrigal, admittedly not knowing the company’s financials, takes issue with the WSJ, and postulates that Pinterest could rake in $45 million in annual revenue using affiliate links with its current traffic. Madrigal’s logic: Image via

Crazy Domestic: Melted Snowman Cookies I saw a picture of these the other day on Allrecipes.com and thought it was such a cute idea, I had to try it. After googleing it, I found a good tutorial on Stacy's Sweet Shop. I modified a few things to make it more simple for me (less homemade more store bought). To see the original Melted Snowman Cookie, and meet the inventor herself, go check out Meaghan (great name) @ The Decorated Cookie! Here's what I used: •1 package Betty Crocker Sugar Cookie Mix•10 large marshmallows•Betty Crocker Cookie Icing (white and orange)•Wilton Decorating Icing Tubes in Black, Red, Green, Blue and Pink***it would have been a lot cheaper if I had just made the icing myself, see Stacy's tutorial for a good recipe)*** Here's what I did: •Mix cookie mix according to directions, or prepare your favorite cut out sugar cookie recipe, then just grab a golf ball sized chunk and squish it down until it's about 1/4-1/2 inch thick. To have your ideas featured on Crazy Domestic, click HERE

The 9/11 dogs in retirement Their eyes say it all Moxie, 13, from Winthrop, Massachusetts, arrived with her handler, Mark Aliberti, at the World Trade Center on the evening of September 11 and searched the site for eight days Tara, 16, from Ipswich, Massachusetts, arrived at the World Trade Center on the night of the 11th. The dog and her handler Lee Prentiss were there for eight days Kaiser, 12, pictured at home in Indianapolis, Indiana, was deployed to the World Trade Center on September 11 and searched tirelessly for people in the rubble Bretagne and his owner Denise Corliss from Cypress, Texas, arrived at the site in New York on September 17, remaining there for ten days Guinness, 15, from Highland, California, started work at the site with Sheila McKee on the morning of September 13 and was deployed at the site for 11 days Merlyn and his handler Matt Claussen were deployed to Ground Zero on September 24, working the night shift for five days Charles Mayfield Did you like this?

Tex-Mex Lasagna Okay I know that "technically" lasagna in itself means that the dish was made with lasagna noodles, but I like the sound of Tex-Mex Lasagna better than Taco Pie, and it's my blog so I'm calling it that! The original recipe came from Kraft Foods (disclosure that I'm an official Kraft Foods Blogger - I didn't get anything to make this recipe though, just so you know). As usual, I changed some things from the recipe to suit my family's tastes. Tex-Mex Lasagna Ingredients1 pound ground beef, browned8 oz of spaghetti sauce2 tablespoons Taco Seasoning1 10 oz package frozen corn, thawed6 burrito sized flour tortillas2 cups of mild cheddar shredded cheesesour cream for garnish Directions1. 2. 3. 4. 5. 6. 7.

Garlic Truffle Fries Friday, June 29, 2007 After a title like that, does this dish need any other introduction at all?!? Just trust me. These will be the best fries you’ll ever have. Look how light and crisp these are! No shaved truffles…I’m not that rich! The secret to these fries are: 1) Use a mandoline. , its only flaw is that it doesn’t do super-thin julienne. which makes perfect shoe-string fries. 2) Rinse Rinse Rinse. 3) Fry twice. 4) Drain. 5) Use the right potato. The amount of garlic that you use is directly proportionate to how much after-dinner lovin' you plan on participating in. Leave a Comment

Jellied Eyeballs (non-alcoholic) Eye See U! Jellied Eyeballs gaze out of their little cupcake wrappers . . . . This picture cracks me up. I love the glistening little eyeballs in the cupcake wrappers - its a juxtaposition of so warped and so sweet . . . Those who have been following the blog for a while will recall that this is our second Halloween pass at the eyeball theme - last year we featured an adult, full blown alcoholic Kamikaze jelly shot recipe. Feedback was that a non-alcoholic version would be great for children's Halloween parties, so here it is. Our technique has gotten sharper too - use of our trusty half-hemisphere mold ups the optical creepiness factor tenfold! Hope you enjoy! Cheers, Michelle Jellied Eyeballs Implements: cotton swab or small paintbrush, 1/2 inch diameter round cookie cutter, a little PAM or vegetable oil (for the molds), paper towels Pan: hemisphere mold (1 mold, 15 cavities), two small dishes (mini-loaf pans work well) Ingredients: Prepare the hemisphere mold.

Unfettered F-U-N . . . Rainbow Jelly Shooter! Rainbow Jelly Shooter Its been a whirlwind at the test kitchen. The book is progressing (crossing fingers that it is going to press in early December!) So, when the weekend rolled around, rather than trolling cocktail books for jelly shot inspiration, we decided it was high time for a bit of unfettered f-u-n . . . I love the "rainbow" gelatin technique - borrowed from the popular recipe for kids' finger gelatin. Cheers, Michelle Rainbow Jelly Shooter Suggested pan: 9" x 13" cake pan, or molds Yield: about 45 jelly shots Garnish: Maraschino cherries, if desired If flexible silicon molds are used, prepare the molds with a quick spray or wipe of vegetable oil, then wipe the molds clean with a clean paper towel. Red Layer 1 cup water2 envelopes Knox gelatin1 box 3 oz box cherry or strawberry gelatin dessert1 cup flavored vodka (we recommend Hangar One, Buddha's Hand citrus infused vodka, but your favorite will work just fine!) Pour water in small saucepan, sprinkle with Knox gelatin. Yellow Layer

Corn Chowder with Bacon It’s finally cooler in Florida now and all I can think about is warm soups and lots of hot tea and coffee. For this soup, I wanted a little taste of summer in a winter soup, so I made this corn chowder with sweet frozen corn. I used a mixture of sweet yellow and white corn along with red and green peppers and lots of smoky bacon. This isn’t only a delicious chowder, but it’s also very economical. It’s very filling, and you can make a ton of it without spending alot. This soup was also featured on Tablespoon.com, along with 3 more amazing soup recipes I will be sharing very soon! This post sponsored by Tablespoon.com