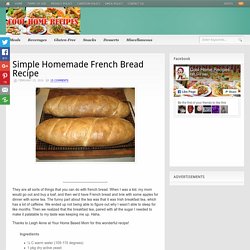 When I was a kid, my mom would go out and buy a loaf, and then we’d have French bread and brie with some apples for dinner with some tea. The funny part about the tea was that it was Irish breakfast tea, which has a lot of caffeine. We ended up not being able to figure out why I wasn’t able to sleep for like months. Then we realized that the breakfast tea, paired with all the sugar I needed to make it palatable to my taste was keeping me up. Haha. Cinnamon Roll Bread to Die For - Home and Garden Digest. I’m a fan of Monkey bread and when I saw this recipe I thought I’d try it an see how it compared to my old favorite. 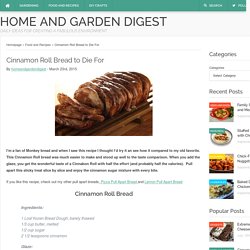 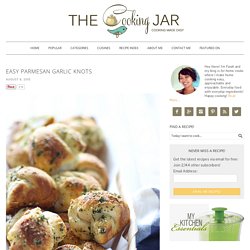 And even though I suck at all things baking, this really looked doable. Even for me. Garlic Knots Recipe. Cheesy Parmesan Italian Biscuits Recipe. Oh boy. 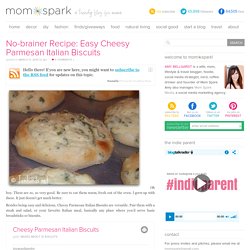 These are so, so very good. Be sure to eat them warm, fresh out of the oven. Cinnamon Apple Pie Bread. Forget the pie crust and get all the flavors of fall in a quick and easy bread with brown sugar and cinnamon topping that’s as sweet as apple pie. 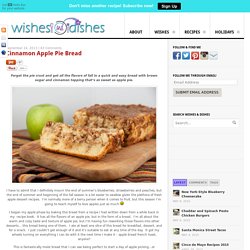 I have to admit that I definitely mourn the end of summer’s blueberries, strawberries and peaches, but the end of summer and beginning of the fall season is a lot easier to swallow given the plethora of fresh apple dessert recipes. I’m normally more of a berry person when it comes to fruit, but this season I’m going to teach myself to love apples just as much I began my apple phase by baking this bread from a recipe I had written down from a while back in my recipe book.

It has all the flavors of an apple pie, but in the form of a bread. I’m all about the warm and cozy taste and texture of apple pie, but I’m having fun reworking those flavors into other desserts… this bread being one of them. How to Make Mmm-Worthy Mozzarella Monkey Bread. Oh, Bite It! 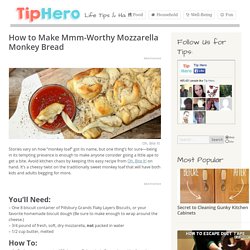 Stories vary on how “monkey loaf” got its name, but one thing’s for sure—being in its tempting presence is enough to make anyone consider going a little ape to get a bite. Amazing Cheesy Bread You Can Make in a Blender. Tara's Multicultural Kitchen If you grew up in a Brazilian household, then you’re probably familiar with quick, easy and delicious cheesy rolls called Pão de Queijo. 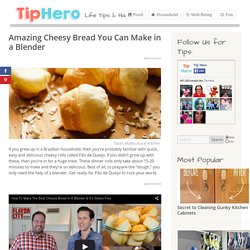 If you didn’t grow up with these, then you’re in for a huge treat. These dinner rolls only take about 15-20 minutes to make and they’re so delicious. Best of all, to prepare the “dough,” you only need the help of a blender. Get ready for Pão de Queijo to rock your world. Here are the ingredients that FlavCity used to make these yummy dinner treats: -1 egg -1 cup of whole milk -1/2 cup veggie oil -5 oz. of grated Parmesan or pecorino cheese -1/4 tsp baking powder -1 tsp kosher salt -1 1/2 cups tapioca flour/starch From Pamela Clare in the comments: Garlic Parmesan Biscuit Pull Apart Bread - Penny Pincher Jenny. Old Fashioned Biscuit Bread. Though skillet bread has been around since pre-Colonial times, this biscuit bread was likely a staple during the Great Depression and probably most often eaten for breakfast, typically just torn from the cake, rather than cut. 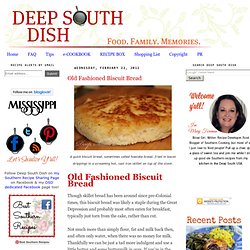 Not much more than simply flour, fat and milk back then, and often only water, when there was no money for milk. Thankfully we can be just a tad more indulgent and use a little butter and some buttermilk in ours. If you're in the mood for biscuits but don't want to bother with the rolling and cutting out part, this is a great way to get them, because essentially this is pretty much just one giant biscuit, with a different preparation. Some southerners call this skillet biscuit a hoecake, and as always, we southerners can get a little bit, well... let's say passionate, about something we grew up with, especially when it comes to food. Some of us insist a hoecake is a small medallion of cornmeal cakes cooked in a skillet, sort of like a pancake. Butter Bombs - Mini Bite Sized Biscuits. If mixing up, rolling out and baking traditional southern biscuits makes anxiety rise in you, these little bite sized drop biscuits are so easy it's sinful. 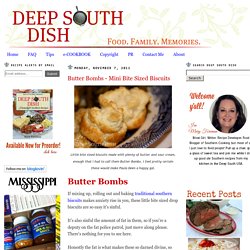 It's also sinful the amount of fat in them, so if you're a deputy on the fat police patrol, just move along please. There's nothing for you to see here. Honestly the fat is what makes these so darned divine, so pop one or two and enjoy them and don't hate on me. Let's just agree to save these for occasionally, rather than everyday. I literally have to stick these in the freezer or my husband will stand in the kitchen, popping them into his mouth like popcorn! Did you know that southern biscuits didn't really start out as the huge "cat head" style biscuits that we've gotten used to? Cream cheese banana nut bread recipe. Butter Dip Biscuits. Did the title of this recipe get your attention? 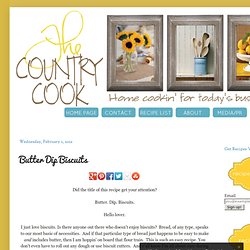 Butter. Dip. Biscuits. Hello lover. Garlic & Herb Cheese Bombs. Bread Cones. For this recipe, I stayed true to the original recipe and didn't change a thing! Ok, I admit that I didn't have the cream horn tubes that are essential for this recipe. I once saw an alternative for making cream horns without the tubes in a Cuisine at Home magazine. They used ice cream sugar cones and wrapped them in aluminum foil. Now, I wasn't going to go buy any ice cream cones to make this. Old Fashioned Pull Apart Pan Rolls. A lot of folks get scared off by the homemade yeast rolls, not so much for the mixing or even the rise time, as much as the process of having to shape them.

This roll takes a little bit of that away since the rolls are just formed into balls and tucked into a cake pan, or if you prefer an oblong baking dish, slightly smaller than a 9 x 13 inch pan. You don't even have to be all that precise with that to be honest, but I've include a tip in the Cook's Notes of the recipe that might be helpful to get a more rounded top on your rolls. As I have often recommended in many of my bread recipes, proof the yeast for your dough as your first step when making breads and rolls. If the yeast does not puff up, it's dead and useless and it would be a waste of your time, energy and ingredients to go forward with it.

How To Make Laffa Bread. I tasted Laffa Bread for the first time while visiting my sister over the holidays and it was bread-love at first bite. Chewy and elastic, laffa bread reminds me of both naan and pita bread, with a better flavor and chew. It is amazing to me that we are able to bake so many different breads, crackers, tortillas, and more, using the same basic ingredients. Garlic Butter Cheesy Crescent Rolls.

Garlic Butter Cheesy Crescent Rolls – amazing crescent rolls loaded with Mozzarella cheese and topped with garlic herb butter. Easy recipe that takes 20 mins!! Ever since I learned how to make garlic herb cheese bombs, my son is hooked on them for his snack. I love it that he likes to eat cheese, at least I know he is getting good nutrition from cheese. The problem is that he is starting to get bored with the cheese bombs and asked for something else to bring to his school. Old Fashioned Biscuit Bread. Garlic Fry Bread. This is not a diet meal. This is a “once in a great while because I want to indulge” kind of thing.

They are amazing. They go perfectly with spaghetti, as a appetizer on pizza night, or with anything you would normally serve garlic bread with. Start by mixing up a batch of pizza dough. Let it rise, and then punch down. Melt your butter in a small saucepan over medium-low heat. Copycat KFC Biscuits & BEST Breads, Scones & Biscuits Recipes. EASY AS 1-2-3 BREAD - Moore or Less Cooking Food Blog. Breakfast Pull-Apart Bread. We’re a cereal, yogurt, and breakfast cookies kind of family during the week. Ain’t nobody got time to prepare some elaborate meal while I’m making lunches, gathering up backpacks, and hollering “get dressed!” Plus, I can’t make breakfast too amazing or the kids won’t ever want to leave the table. But Saturday and Sundays are different, right? So, my kids put in their suggestions all week long for the weekend.

Haley usually votes for pancakes, while Trevor always wants waffles. Blooming Garlic Bread. Easy Homemade English Muffin recipe - Eating on a Dime. The one thing I have always wanted to try to make was English muffins. Light and Fluffy Dinner Rolls. How to make Subway Bread at Home. Ok ok, First of all I know what you are thinking– why go through all the trouble of making Subway at home when it is so cheap to buy? You really can’t beat a good $5 footlong! I am totally with you there.. but I am sure there are people out there, like me, who need (or want) to make it at home for whatever reason.

My 4-year-old, for some reason, has been on a Subway kick lately. Easy crusty bread {dutch oven} Old Fashioned Southern Bread Pudding. Ah, old fashioned bread pudding. A dessert born out of economics and the need to use up stale bread, turned into a delectable, delicious plate of total comfort. Loaded Cheddar Bacon Loaf! Bacon Cheddar Garlic Bread is garlic bread taken to the next level, it’s fully loaded with all of the best toppings including fresh garlic, cheese and bacon. It’s easy to make and is the perfect side or appetizer! © SpendWithPennies.com. Garlic Herb Cheese Bombs - Easy Recipes at RasaMalaysia.com.

Garlic Herb Cheese Bombs - Easy Recipes at RasaMalaysia.com. Beautiful Bacon, Egg, & Cheese Wreath & The Inspiration Behind It All Steelmom. While watching videos for the new Kraft Cooking Creme, at the Real Women of Philadelphia, I came across this recipe I found so intriguing. The RWoPer that inspired me to make this wreath is known as "Steelmom". For me, her nickname has always been perfect for her, since she is someone I admire for being a hard working mother inside and outside of the home. She must be made of steel to do all that she does, working full time as a sales representative for a steel mill, raising a family, and not to mention creating the most beautiful hand painted ornaments. Mini Garlic Monkey Bread - Easy Recipes at RasaMalaysia.com. Easy Garlic Parmesan Knots.