Brown butter maple pumpkin bread. I am in dire need of a weekend morning butler. 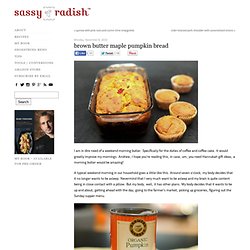 Specifically for the duties of coffee and coffee cake. It would greatly improve my mornings. Andrew, I hope you’re reading this, in case, um, you need Hannukah gift ideas, a morning butler would be amazing! A typical weekend morning in our household goes a little like this. Around seven o’clock, my body decides that it no longer wants to be asleep. Maple Pecan Sticky Buns. The other night, my family invited my sister's and my family over for a breakfast supper to enjoy their freshly-boiled maple syrup. 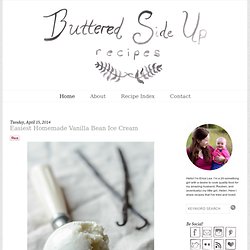 My sister called me up and said, "I'll make the apple crisp if you make the ice cream. " Deal. Now, in a situation like this, when you're required to make ice cream in an afternoon (I didn't know until about two or three that this was going to be a thing), you definitely do NOT have time to cook up a custard and get it down to bone-cold temperature for churning. Thankfully, you can still make an awesome homemade ice without a custard base. All that's required is mixing all of the ingredients together and churning. It's dangerous knowledge. Self - {Gingerbread Monkey Bread with Creamy Whiskey Maple Glaze} I hate being told to relax. 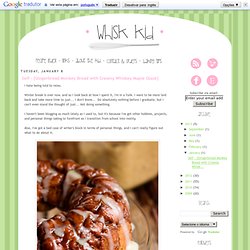 Monkey Bread with Bourbon Cr?me Anglaise. It didn't totally blow up my radar, however, until only a few weeks ago. 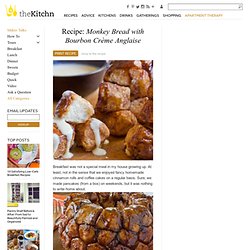 I was celebrating a bachelorette with some of my favorite girlfriends at a too-cool-for-school Atlanta restaurant. We had already overindulged in one too many courses of food, but our waiter gently encouraged us to order the sampler platter of desserts. Never one to say no to sweets, I caved against my (stomach's) better judgement. I couldn't begin to tell you what else was on that giant tray of desserts. Banana Bread Cinnamon Rolls. What do you get when you combine banana bread with cinnamon rolls? 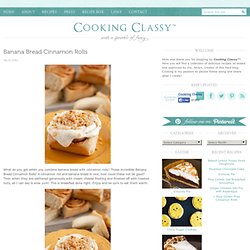 Pumpkin Pie Bread Pudding with Bourbon Icing. For all of you jokers out there who think that all pumpkin consumption should cease and desist immediately after the post-Thanksgiving tryptophan haze has cleared…all I have to say is this: they don’t call it WINTER squash for nothing. 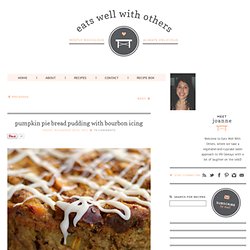 And to be fair, it really is one of the few bright {orange} spots in the winter vegetable consortium. Uh, literally…seeing as how the entire root vegetable melange is about as pale beige as an Upper East Side private school. Which is not to say that I have anything against rutabagas, turnips, or parsnips (celery root, though – work of the devil). But… it all comes down to aesthetics. And if you’ve ever failed at tried photographing a plate of off-white chunks in such a way that people actually want to eat it…then you’ll understand from which part of my {traumatized} subconscious my love of winter squash arises. Pumpkin bread pudding. Here is a recipe that every single person should have in their arsenal, and I couldn’t be happier that it is now in mine. 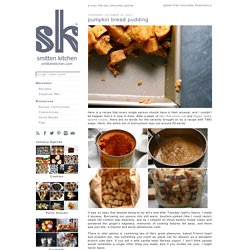 After a week of flan that never set and floppy, leaky quiche crusts, there are no words for the serenity brought on by a recipe with TWO steps. Heck, the entire set of instructions tops out around 50 words. It was so easy that despite being at my wit’s end after Tuesday night’s fiasco, I made it anyway. Burrowing our spoons into still warm, bourbon-spiked (like I could resist) sweet fall comfort was heavenly, and as I chewed on those buttery bread cubes and pondered the ginger’s edginess, memories of cooking failures fell away, and there was just this, a blissful and eerily wholesome calm. There is utter genius is combining two of life’s great pleasures, baked French toast and pumpkin pie, into something you could as easily eat for dessert as a decadent brunch side dish. 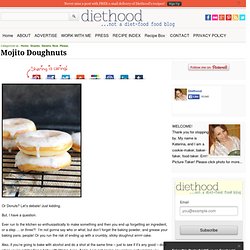 Let’s debate! Just kidding. But, I have a question. Ever run to the kitchen so enthusiastically to make something and then you end up forgetting an ingredient, or a step … or three?! I’m not gonna say who or what, but don’t forget the baking powder, and grease your baking pans, people! Also, if you’re going to bake with alcohol and do a shot at the same time – just to see if it’s any good – do it when you’re not feeding a baby with Mama Juice. Soooo, who is going to a Labor Day Party. What are you bringing? How about some Boozy Doughnuts? Oh oh … how about an Orzo Salad with Pears and Gorgonzola?!? Tell you what. I whipped up these doughnuts for my husband and my dad. He was healed. Ingredients 1 cup all-purpose flour 1/2 cup sugar 1 1/2 teaspoons baking powder 1/4 teaspoon salt 1/2 cup whole milk 1 tablespoon rum 1 whole egg 3 tablespoons butter, softened For the Glaze: 2 tablespoons whole milk 1 teaspoon fresh lime juice 1 cup powdered sugar 1/8 teaspoon dried mint.