Pumpkin Banana Bread. For those times when you want to come to the party with a traditional basket of baked goods, try your hand at this seasonal and delicious pumpkin banana bread! 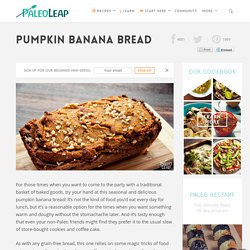 It’s not the kind of food you’d eat every day for lunch, but it’s a reasonable option for the times when you want something warm and doughy without the stomachache later. And it’s tasty enough that even your non-Paleo friends might find they prefer it to the usual slew of store-bought cookies and coffee cake. As with any grain-free bread, this one relies on some magic tricks of food science to really make it work, so you’ll want to be cautious if you have to substitute any ingredients.

Everything in the list is there to enhance the taste and texture of the bread, so changing the basic ingredients of the dough will inevitably change the result. Most importantly, you can skip the honey if you’re trying to be really pure about sweeteners, but just remember that the recipe won’t be quite the same. PREP: 15 min. COOK: 45 min. Peanut Butter-Banana Bread Recipe. Last week, I had a bowl of browning bananas on the kitchen counter staring me in the face. 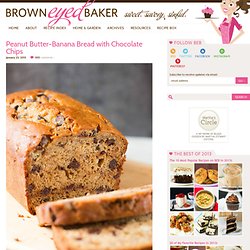 I was about to make my grandma’s banana bread recipe, which is my all-time favorite, but at the last minute decided to try something new. Next to chocolate, banana might be my next preferred ingredient to eat with peanut butter. As a teenager, I would often eat peanut butter and banana sandwiches. Within the last year, I started eating a banana alongside a scoop of peanut butter for breakfast on mornings when I’m planning on going for a long walk, or to play tennis (obviously, in the summer!). 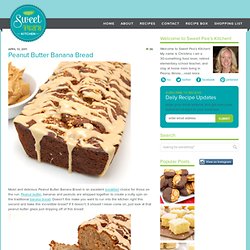 Peanut butter, bananas and peanuts are whipped together to create a nutty spin on the traditional banana bread. Doesn’t this make you want to run into the kitchen right this second and bake this incredible bread? If it doesn’t, it should! I mean come on, just look at that peanut butter glaze just dripping off of this bread! Would you believe me if I told you that this recipe comes from Cooking Light magazine? When this bread graced the cover of Cooking Light magazine a few months ago I knew immediately it would be a hit. Ingredients: For the Peanut Butter Glaze: 1/3 cup powdered sugar 1 tablespoon 1% low-fat milk 1 tablespoon creamy peanut butter Directions: Preheat oven to 350° F. Leave a Comment. Www.food.com/recipe/best-banana-bread-2886. Recipe Box Grocery List Print Share How to Make Homemade Bread (2:29) More Here's everything you "knead" to know about baking your own bread. 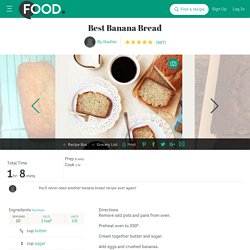 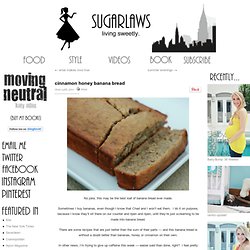 Sometimes I buy bananas, even though I know that Chad and I won’t eat them. I do it on purpose, because I know they’ll sit there on our counter and ripen and ripen, until they’re just screaming to be made into banana bread. There are some recipes that are just better than the sum of their parts — and this banana bread is without a doubt better than bananas, honey or cinnamon on their own. In other news, I’m trying to give up caffeine this week — easier said than done, right?

I feel pretty wretched, so it’s nice to have a special treat like this when I wake up and all I want is coffee or soda. What do you guys think? , which is just as terrific as everyone told me it would be.