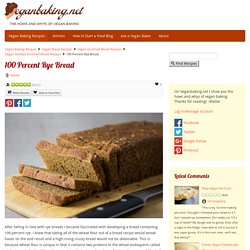 I knew that taking all of the wheat flour out of a bread recipe would wreak havoc on the end result and a high-rising crusty bread would not be obtainable. This is because wheat flour is unique in that it contains two proteins in the wheat endosperm called glutenin and gliadin. When these proteins hydrate and undergo friction, they unravel like balls of yarn, bind together into sticky strands and form a structure building network. This elastic web of protein holds in air bubbles during leavening and acts as a structure builder after the bread cools, resulting in a high-rising, fluffy, springy loaf.

The magic of pentosans Rye flour does contain tiny amounts of gluten and gliadin but not enough to form a considerable amount of gluten in baking applications. No Knead Pizza Dough Recipe from Artisan Bread in Five Minutes a Day via Steamy Kitchen. Naan - plain, avocado, garlic, stuffed and more. Indian flat bread. vegan. Below are some videos on how to make some of the indian flat breads. 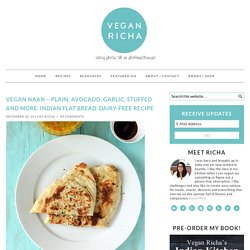 Though the recipes in the videos are not vegan,, videos help with the steps and technique. Vegan Pumpkin Bread. Readers, I have some advice. 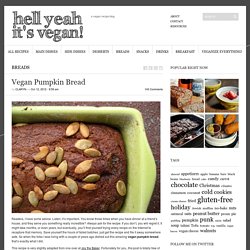 Listen; it’s important. You know those times when you have dinner at a friend’s house, and they serve you something really incredible? Always ask for the recipe. If you don’t, you will regret it. It might take months, or even years, but eventually, you’ll find yourself trying every recipe on the Internet to recapture that memory. This recipe is very slightly adapted from one over at Joy the Baker. Yesterday I posted about agave-sweetened pumpkin muffins, so check those out if you want something brighter and milder in flavor. Rosemary Sourdough Bread. Homemade sourdough bread infused with fresh rosemary is a gourmet treat that any vegan can make at home. 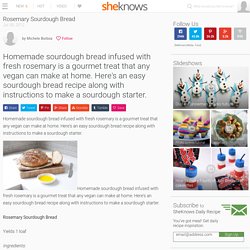 Here's an easy sourdough bread recipe along with instructions to make a sourdough starter. Rosemary Sourdough Bread Yields 1 loaf Ingredients: 2 cups bread flour 1-1/2 cups sourdough starter 1 teaspoon salt 2 tablespoons minced fresh rosemary Olive oil CornmealDirections: In a standup mixer fitted with the dough hook, combine the flour, starter, salt, and rosemary, and mix on low until ingredients are moistened then increase to medium-high and knead dough until it no longer sticks to the bowl. 100 Percent Rye Bread. Pita bread recipe, how to make pita bread. This pita bread is soft, moist, light and has their trademark pockets and yes healthy too… as the pita breads are made from whole wheat flour plus vegan. what else one can ask for… 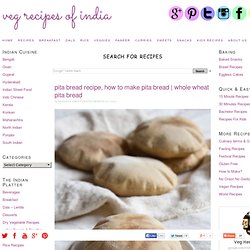 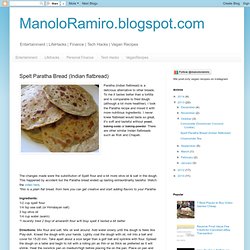 To me it tastes better than a tortilla and is comparable to fried dough (although a lot more healthier). I took the Paratha recipe and mixed it with more nutritious ingredients. I never knew flatbread would taste so great, it's soft and tasteful without yeast, baking soda or baking powder. There are other similar Inidan flatbreads such as Roti and Chapati. The changes made were the substitution of Spelt flour and a bit more olive oil & salt in the dough. Ingredients: 1/2 cup spelt flour 1/4 tsp sea salt (or Himalayan salt) 3 tsp olive oil 1/4 cup water (warm)*I recently tried 2 tbsp of amaranth flour w/6 tbsp spelt it tasted a bit better. Hamburger Buns: My Buns Look Good Don’t You Think? (revised 7/2/10) It’s grilling season and that means burgers! 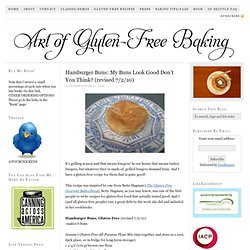 In our house that means turkey burgers, but whatever they’re made of, grilled burgers demand buns. And I have a gluten-free recipe for them that is quite good! This recipe was inspired by one from Bette Hagman’s The Gluten-Free Gourmet Bakes Bread. Bette Hagman, as you may know, was one of the first people to write recipes for gluten-free food that actually tasted good. Green Goddess Gouda Cheese and Vegan St. Patrick's Day Round up. Spelt rolls recipe. 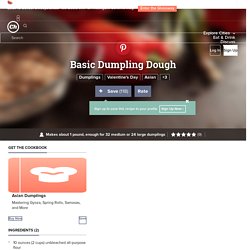 The process of making the dough is easy to master, especially with a little help from modern tools such as a food processor (though you can mix the dough by hand). Asian wheat flour wrappers may be made with cold or hot water—the temperature is traditionally dictated by the cooking method. Boiled dumplings are said to require thicker skins made from cold-water dough in order to withstand the pressures of boiling, whereas panfried and steamed dumplings require thinner skins made from hot-water dough for their gentler cooking processes.

Over the years, I’ve found that homemade wrappers of medium thickness, a scant 1/8 inch thick in the center and about 1/16 inch thick at the rim, work well for all cooking methods. Wonton Wrappers.