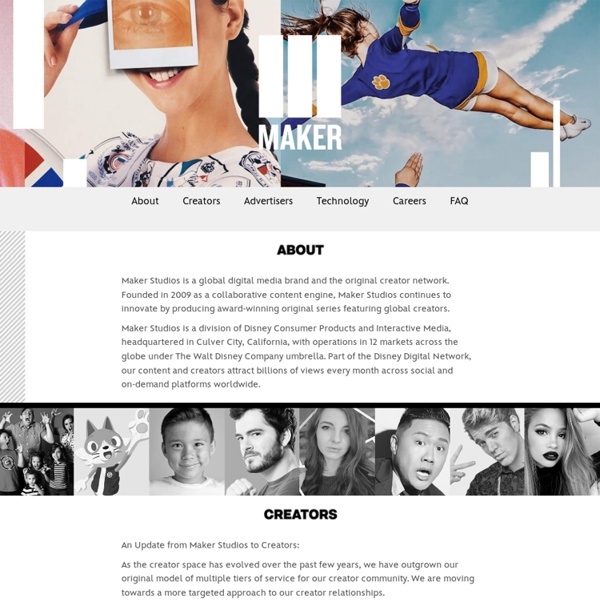 VidCon revels in YouTube - Entertainment News, Technology News One by one, the top executives at YouTube took turns taking the stage Friday at Century City’s Hyatt Regency Century Plaza Hotel to give an overview of their business. But this presentation wasn’t for entertainment execs or shareholders; it was made to a mostly teenage crowd of 2,500 who rarely let a minute go by without unleashing screams of delight. Though YouTube CEO Salar Kamangar might have hoped they were cheering him, the deafening peals were more likely directed at some of the site’s biggest draws, from Buck Hollywood to Mystery Guitar Man, who joined him to tout YouTube’s latest developments. Welcome to VidCon, a three-day convention that ended Saturday celebrating the raucous subculture surrounding YouTube, where the consumers and producers of the Web’s most popular videos are often one in the same.

Legal Music For Videos Many musicians choose to release their songs under Creative Commons licenses, which give you the legal right to do things like use their music in your videos. What is Creative Commons? Creative Commons is a system that allows you to legally use “some rights reserved” music, movies, images, and other content — all for free. CC offers free copyright licenses that anyone can use to mark their creative work with the freedoms they want it to carry. For instance, a musician might use a Creative Commons license to allow people to legally share her songs online, make copies for friends, or even use them in videos or make remixes. (Exclusive) YouTube's New Strategy: Create a Network Of Networks YouTube is now showing approximately 3 billion videos a day. A growing proportion of those are shown with ads—more than 2 billion a week—and YouTube as a business is expected to pass $1 billion in revenue next year. But when it comes to making money, some videos do better than others. Professionally-produce videos attract the most ad dollars.

Digital Video in 2012: Explosive, Volatile, Maybe Even Amazing These are heady times for online video. The ad market is expected to grow about 50 percent this year and over 40 percent next year, per eMarketer. YouTube is throwing $100 million into nurturing new talent and programming. More big-name producers and Hollywood actors are gravitating to the medium to produce pet or experimental projects. Ad networks continue to drown in venture capital, and the technology for ad targeting keeps getting more sophisticated. Maker Studios The digital production company seeks prospective Internet stars and gives them a stage. A cursory viewing of any number of viral videos -- with their irreverent tone, ramshackle aesthetics and simple approach to narrative -- might give the impression that fame in the digital video world largely rests on luck. But the founders of Maker Studios, a Culver City digital production company that is home to several YouTube stars, say that lasting online stardom is serious business. "When I am meeting talent, the first thing I want to know is, how committed are they to it?"

MovieClips now showing on YouTube For the past two years, MovieClips Inc. has been building a service aimed at movie buffs who love to watch their favorite scenes, whether it’s from “Scarface” (login required) or “Casablanca.” MovieClips Inc. Now the company hopes to build a bigger audience on YouTube. MovieClips and Mountain View’s Google Inc. announced a partnership Tuesday that will bring clips like this “Gut Reaction” scene from the hit comedy “Bridesmaids” to YouTube. MovieClips has a library of about 20,000 high-definition movie clips that can be shared. MovieClips has licensing deals with six of the seven major movie studios (Disney the big exception)and several smaller studios.

MOVIECLIPS Announces Partnership With YouTube to Bring the Largest Collection of Licensed Movie Clips to YouTube VENICE, Calif.--(BUSINESS WIRE)--MOVIECLIPS today announced a partnership with Google to bring more than 20,000 licensed Hollywood HD movie clips to YouTube. The clips will be featured in the Movie Extras on the YouTube VOD platform (youtube.com/MOVIES) and will be accessible through the MOVIECLIPS YouTube channel (youtube.com/MOVIECLIPS). “We’re excited to be working with MOVIECLIPS.com to provide users with exactly what they're looking for when they want to get more into movies on YouTube.” “We are honored to partner with Google to bring the best movie moments to an avid movie audience on YouTube,” said Zach James, Co-Founder of MOVIECLIPS.

movieclips's Channel Home Alone movie clips: THE MOVIE:iTunes - Play - - Digital HD - miss the HOTTEST NEW TRAILERS: CLIP DESCRIPTION:Kevin (Macaulay Culkin) keeps laying down the punishment on the would-be bandits. FILM DESCRIPTION:Home Alone is the highly successful and beloved family comedy about a young boy named Kevin (Macaulay Culkin) who is accidentally left behind when his family takes off for a vacation in France over the holiday season. Once he realizes they've left him "home alone," he learns to fend for himself and, eventually has to protect his house against two bumbling burglars (Joe Pesci, Daniel Stern) who are planning to rob every house in Kevin's suburban Chicago neighborhood. Though the film's slapstick ending may be somewhat violent, Culkin's charming presence helped the film become one of the most successful ever at the time of its release. WHO ARE WE?