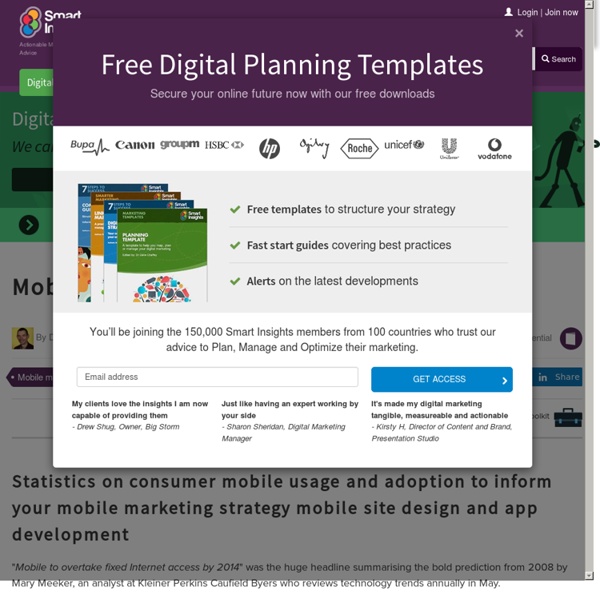 "Mobile to overtake fixed Internet access by 2014" was the huge headline summarising the bold prediction from 2008 by Mary Meeker, an analyst at Kleiner Perkins Caufield Byers who reviews technology trends annually in May. The mobile statistics that the team at Smart Insights curate in the regular updates to this article are grouped under these headings for key questions marketers need to answer about mobile to help them compete: Q1. Time spent using mobile mediaQ2. Percentage of consumers using mobile devicesQ3. How many website visits are on mobile vs desktop devices? The United States and United Kingdom are the main countries covered for which there are many reports. Well, we're now past the mobile Tipping Point shown in the chart below as this 2017 mobile usage report from comScore shows, based on percent of mobile minutes spent online. So it's no longer a case of asking whether mobile marketing important, we know it is! Download our Free Digital Strategy Guide. Q1. Q2. Q3. Q4. Q5. Q6.

Mcommerce Faces Strong Headwinds in France Mcommerce—the subject of much enthusiasm and speculation in the UK and the US—is not taking off so quickly in other European markets, according to June 2013 research by RetailMeNot.com—owner of the discount aggregator VoucherCodes.co.uk—and Ipsos Public Affairs. The “Shoppers Trend Report” indicated that while one in 10 consumers in Great Britain had made a purchase using a mobile device, take-up was substantially lower in Germany (6%), Italy (4%) and the Netherlands (4%)—and a truly minimal 2% in France. By contrast, China and India registered at least 15% of web users buying via mobile devices.

Insights from KPCB US and global internet trends 2015 I always enjoy and gain great insight from Mary Meeker's 'State of mobile marketing' reports which she regularly publishes at this time of year via Kleiner Perkins Caufield & Byers. It's part of a 2015 Internet Trends report available from KPCB and also available in Slideshare format. The only issue is their scale - the deck is pushing 200 slides, so this year we're again giving a need-to-know digest of what's hot and what's new to save your eyes and digestion system. Of course there are a lot of data points showing that Mobile use is BIG and growing BIGGER, but you'll know this already - see our mobile Internet stats page for the big picture.

Smartphone Ownership and Internet Usage Continues to Climb in Emerging Economies But advanced economies still have higher rates of technology use By Jacob Poushter As the world becomes increasingly interconnected, both economically and socially, technology adoption remains one of the defining factors in human progress. Current Trends And Future Prospects Of The Mobile App Market The mobile app market is growing faster than a beanstalk. The industry is huge and growing daily, and there is no end in sight. Expectedly, the mobile developer population has boomed, and the number of mobile apps in the market has hit new heights. The revenue generated by the global mobile app industry has skyrocketed. Hybrid monetization models, such as in-app ads and in-app purchases, are quickly gaining popularity in the business world. Most studies show that in-app advertising is set to be a key driver of mobile growth over the coming years (see Statista’s, IHS Markit’s and Forbes’s reports).

Why I Stopped Selling SEO Services and You Should, Too In my 28 years on this planet, I've come to accept two things as fact: The sun rises every morning. Marketers screw everything up. Because of fact No. 2, I had to stop selling SEO. Why? Here's an interaction I used to have five times a day. Uses of internet in our daily life is depend on desires and goals. Activities in our daily life is decided after the use internet. Internet innovated our life. Mobile App Development Facts & Stats The mobile application development market is witnessing an unprecedented growth. A big percentage of this growth has to be attributed to the increasing popularity of the cross platform app market, which is estimated to reach USD $7.5 Billion by 2018. More than 80% users believe that Cross platform apps are faster to develop and are a cost-effective approach to tap into the mobile app market. The infographic below gives an overall idea about some more important cross platform statistics like: cross platform tools market size forecast, number of users across the geographies, major benefits & selection criteria, most popular platforms for cross platform apps, stats about future plans for developing cross platform apps and some of the most popular cross platform tools.

Custom campaigns - Analytics Help By adding campaign parameters to your URLs, you can identify the campaigns that send traffic to your site. When a user clicks a referral link, these parameters are sent to Google Analytics, so you can see the effectiveness of each campaign in your reports. For example, you could use campaign parameters to find out if more users arrive at your download page in an app marketplace from an in-app ad or a search ad.

Mobile Statistics, Stats & Facts 2011  Microsoft Tag has just released a neat infographic highlighting statistics on how people are using mobile phones in 2011. I also dug up a great video that featured late last year with an array of great mobile “growth” statistics, stats and facts for 2011. The infographic shows that over 1 billion of the worlds 4+ billion mobiles phones are now smartphones, and 3 billion are SMS enabled (weirdly, 950 million mobile phones still don’t have SMS capabilities). In 2014, mobile internet usage will overtake desktop internet usage and already in 2011, more than 50% of all “local” searches are done from a mobile device. 86% of mobile users are watching TV while using a mobile phone, 200+ million (1/3 of all users) access Facebook from a mobile device and 91% of all mobile internet use is “social” related.

Best Practices for creating Custom Campaigns - Analytics Help 1. Tag only what you need. If your Google Analytics account is linked to an active Google AdWords account and you have auto-tagging enabled, you don't need to tag your destination URLs in AdWords. Google Analytics automatically tracks all of your AdWords campaigns. The 6-Point Guide to an Irresistible Email Teaser Campaign [Case Study] So you’ve got a solid mailing list of devotees who believe in the good work you put out. And you also have an upcoming product/app/site that’s better than the invention of sliced bread. Now wouldn’t it be fantastic if you could create enough buzz with your mailing list that you end up having thousands of people signing up on wait lists to get access to your upcoming release? Well, by creating an alluring and irresistible email campaign that teases and builds up anticipation for your project, you can create a great amount of support and succeed in your project goals.