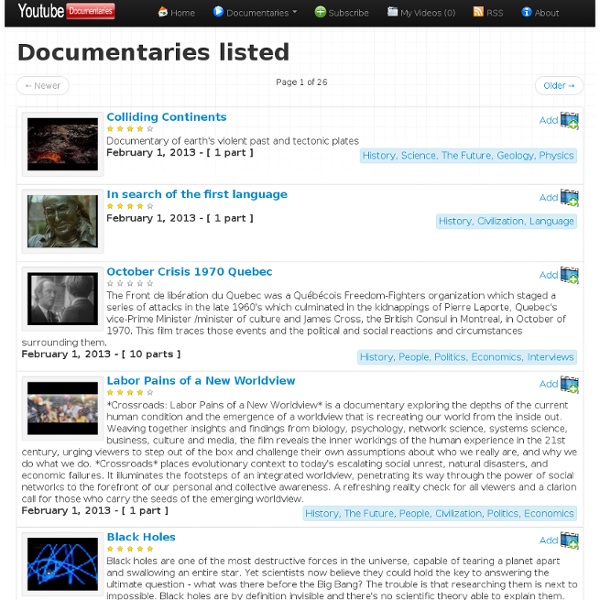 The Viking Warriors The Vikings (from Old Norse víkingr) were seafaring north Germanic people who raided, traded, explored, and settled in wide areas of Europe, Asia, and the North Atlantic islands from the late 8th to the mid-11th centuries. The Vikings employed wooden longships with wide, shallow-draft hulls, allowing navigation in rough seas or in shallow river waters. Related:  Most Interesting Documentaries

Best World War 2 Documentaries Thanks to the valiant efforts of television producers the world over (and a few dubious cable channels), you don't have to learn about the past through books. Instead, you can sit back, relax and have your history accompanied by genuine footage from the time. This is my list of the best World War 2 documentaries you can buy: some great series haven’t been released. 1. The World at War is quite simply the best documentary ever made. 2. I've not been able to see many of these documentaries so far, but they come highly recommended by a reader (which is how I first learnt of them) who says they are excellent. 3. The attraction of this DVD is simple: it's WWII in colour. 4. The single greatest propaganda film ever made, Leni Riefenstahl's account of the 1934 Nuremberg Rally is a masterpiece which partly forged the seductive and powerful image of Nazism. 5. 6. 7. 8. 9. Many are quick to dismiss this as the mid-war propaganda it clearly is, but they're missing the point. 10.

The Cost of a Coke Coca Cola, we've found out, has actually been cooperating with paramilitaries in Colombia to execute workers in their own bottling plants that are trying to form unions and trying to demand better working conditions. So we've been able to bring this to the attention of Universities and say 'if Coca Cola doesn't stop doing this and if Coca Cola doesn't adopt different practices, then our University is no longer willing to have anything to do with Coca Cola. In the world of the Coca-Cola Company, whenever there's a union there's always a bust, whenever there's corruption there's always the real thing, yeah!! Justice Productions second release, The Cost of a Coke: 2nd Edition is the updated version to Matt Beard's first documentary, The Cost of a Coke. The Cost of a Coke: 2nd Edition explores the corruption and moral bankruptcy of the world's most popular soda, and what you can do to help end a gruesome cycle of murders and environmental degradation. Watch the full documentary now

Watch Confessions of an Undercover Cop Documentary Online Free The inside story of Mark Kennedy, the police officer who spent eight years undercover as a dedicated activist, having infiltrated the environmental movement and Europe’s left-wing extremist political groups. Now, with his cover blown, Kennedy has lost his wife and children, and the friends he made during his time with the protesters have labelled him a traitor. In this Cutting Edge film, he discusses the consequences of his actions, as police bosses claim he has forgotten who he really is. With exclusive access to Mark Kennedy, Britain’s most controversial undercover police officer, this gripping and revelatory documentary tells the definitive, inside story of Mark Stone/Kennedy. This was Mark the environmental campaigner, militant activist and undercover cop who broke into power stations, learned how to make bombs, infiltrated groups hell-bent on attacking major corporations and stood arm-in-arm with anti-capitalist anarchists.

End of Liberty End of Liberty exposes from a real life perspective how the U.S. is headed for a complete societal collapse. All Americans are now experiencing countless warning signs on a daily basis that a societal collapse is near. Unfortunately, most Americans don't understand the significance of these warning signs. Each warning sign by itself doesn't appear to have a lot of meaning, but together these warning signs present a very detailed picture of the current state of the U.S. economy and where this country is soon headed. The documentary is over an hour long and features Gerald Celente, the most accurate trends forecaster in U.S. history. End of Liberty also features the National Inflation Association's president Gerard Adams, who on February 5th purchased call options in the silver ETF at $0.89 (NIA publicly announced his purchase to NIA members on February 8th) that he sold last week at $4.25 for a gain of 378% in a little over eight months. Watch the full documentary now

Top 10 Shocking Documentaries Movies and TV As a visual medium, documentaries frequently succeed in portraying the unimaginable far better then any book alone could do. Beaming everything from the consequences of child abuse to the horrors of nuclear warfare into the homes of millions, the following infamous documentaries shock the viewer and challenge perceptions. Please note: Almost all the videos featured contain graphic and disturbing content, relevant to the topic at hand. Warning: some of these documentaries contain disturbing footage. High on Crack Street Following the struggle of three crack addicts, ‘High on Crack Street’ digs deep into the complex daily lives of individuals striving to obtain their next fix. Aokigahara / Suicide Forest Lying at the base of Mount Fuji, Aokigahara Forest has a rather unsettling reputation as a suicide hotspot . Nuit et Brouillard The Killing of America Interview with a Cannibal What drives a man to kill and cannibalize an innocent woman? Bulgaria’s Abandoned Children

LEAKED NORTH KOREAN DOCUMENTARY ‘EXPOSES WESTERN PROPAGANDA’ (AND IT’S SCARY HOW TRUE IT IS) Sabine is a YouTube user who, during a visit to family living in South Korea in April of this year, was given a DVD by a man and a woman claiming to be North Korean “defectors”, and was asked to translate the film so it could be posted on the internet and reach a wider audience. What the DVD turned out to be was something much more than Sabine, or anyone else, probably would’ve imagined, and something that certainly has found a widespread audience on the internet over the last month or so – it was a film called “PROPAGANDA”, a documentary about capitalism, imperialism, mass manipulation of western culture for the purpose of commodification, and how it permeates every aspect of the lives of blissfully ignorant, borderline zombie masses. And jesus, is it on the fucking money. From the video’s description - North Korea in the 1980s The movie opens: “This is a film about psychological warfare. And in the real world, in case you haven’t realized, everything is propaganda. Table of Contents:

= Sirius Documentary = Assange: Facebook, Google, Yahoo are Spying Tools In Julian Assange’s exclusive interview with RT he discusses everything from the uprisings in MENA, to his extradition fight, the Guantanamo and US Cable files, his relationship with The Guardian and The New York Times, global political youth movements, the current state of mainstream media and Bradley Manning. He famously warns that social media and in particularly Facebook, Google, Yahoo are among the greatest spy machines ever invented. Once again Mr. Assange demonstrates his intelligence, authenticity and consciousness. The man behind WikiLeaks says his website’s revelations are just the tip of the iceberg. "It’s not a matter of serving a subpoena, they have an interface they have developed for US Intelligence to use. Watch the full documentary now (playlist - 42 minutes)