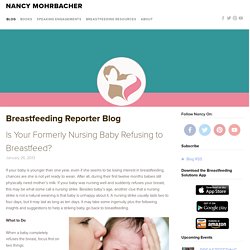 Expressing your milk 2. Feeding the baby Pump as often as baby was breastfeeding. Feed your baby your milk. Most mothers think first of using a bottle, but choosing a feeding method that does not satisfy your baby’s sucking urge may end the strike sooner. What Causes a Nursing Strike? Why do babies who nursed well suddenly refuse the breast or begin to struggle with latching? Physical Causes Ear infection, cold, or other illnessReflux disease, which makes feedings painfulOverabundant milk production with a fast, overwhelming flowAllergy or sensitivity to a food or drug mother consumedPain when held after an injury, medical procedure, or injectionMouth pain from teething, thrush, or a mouth injuryReaction to a product such as deodorant, lotion, or laundry detergent Environmental Causes Knowing the cause will make it easier to choose an effective strategy. 31 Truths About Raising Kids That You Won’t Find In A Parenting Book.

Why Time-Out Is Out. Andrew Bordwin Family doctor Burt Banks, M.D., was at his wits' end -- locked in a power struggle with his son Trenton, then 4. 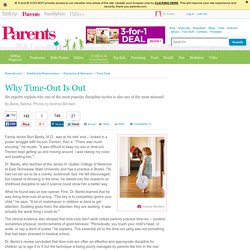 "There was much shouting," he recalls. "It was difficult to keep my son in time-out. Trenton kept getting up and moving around. I was raising my voice and scolding him. " Dr. What he found was an eye-opener. The clinical evidence also showed that time-outs don't work unless parents practice time-ins -- positive, sometimes physical, reinforcements of good behavior. Dr. Parents' Biggest Mistakes... Thirty years after it came into vogue as an alternative to spanking, time-out is getting its middle-age checkup from physicians and other child advocates. Simply put, time-out is supposed to be a brief pause in a caregiver's interaction with a child, its purpose being to allow the child a chance to practice self-calming skills. The biggest mistake parents make is to insist that time-outs last one minute for each year of a child's age. ...And What They Should Do Instead. First Year Development: Infant Development. Perhaps your six month old has not rolled over yet, but the child development chart shows that some babies start rolling over at five months. 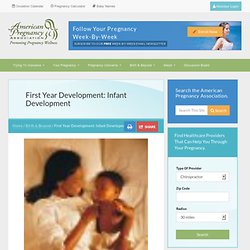 Or possibly your neighbor’s eleven month old is walking, but your thirteen month old has not attempted to walk. Maybe you are worried that your baby’s development is not where it should be and wonder what this means for his or her future. Comparing your baby’s development to other infants or to norms on developmental charts should be avoided. Instead it is important to know that babies develop at different rates and should only be compared to their individual milestones from the previous week or month. Categories of Infant Development: Infant development is divided into four categories: Social: How your baby interacts to the human face and voice. 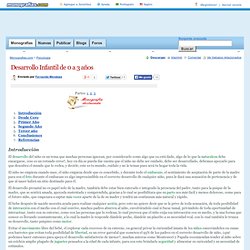 Physical Development of Babies. A lot will happen in your baby's first 12 months of life. 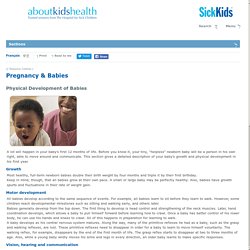 Before you know it, your tiny, "helpless" newborn baby will be a person in his own right, able to move around and communicate. This section gives a detailed description of your baby's growth and physical development in his first year. Growth Most healthy, full-term newborn babies double their birth weight by four months and triple it by their first birthday. Keep in mind, though, that all babies grow at their own pace.

Motor development All babies develop according to the same sequence of events. Babies generally develop from the top down. A baby develops as his central nervous system matures. Baby's first year of physical development. Brain development Your newborn’s brain is only about a quarter developed, which makes sense when you compare the size of her head to that of an adult. 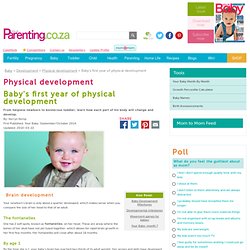 The fontanelles She has 2 soft spots, known as fontanelles, on her head. These are areas where the bones of her skull have not yet fused together, which allows for rapid brain growth in her first few months. Her fontanelles will close after about 18 months. By age 1 By the time she is 1, your baby’s brain has reached two thirds of its adult weight. Head and hair Shape of the head.