If baby struggles at breast, what can I do? Rachel O'Brien IBCLC Blogs about Boobs and Breastfeeding in Sudbury MA - Lact... When a Baby Won't Nurse. Carol Brussel, BA, IBCLC Denver CO USA From: NEW BEGINNINGS, Vol. 18 No. 4, July - August 2001, p. 136-138 A mother seeks help with her infant, who, she says, "has never breastfed. 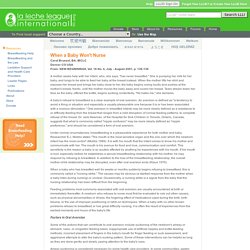 " She is pumping her milk for her baby, and longs to be able to feed her baby at the breast instead. When the mother lifts her shirt and exposes her breast and brings her baby close to her, the baby begins crying loudly and pushes at the mother's breast, frantic, until the mother moves the baby away and covers her breast. Tears stream down her face as the baby, offered the bottle, begins sucking contentedly.

"He hates me," she declares. A baby's refusal to breastfeed is a clear example of oral aversion. Under normal circumstances, breastfeeding is a pleasurable experience for both mother and baby. When a baby who has breastfed well for weeks or months suddenly begins refusing to breastfeed, this is commonly called a "nursing strike. " Factors in Oral Aversion Examine any feeding methods you use. Asymetrical Latch. When Baby Does Not Yet Latch. There are many reasons a baby might refuse to take the breast. 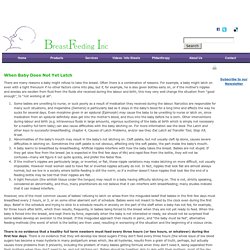 Often there is a combination of reasons. For example, a baby might latch on even with a tight frenulum if no other factors come into play, but if, for example, he is also given bottles early on, or if the mother’s nipples and areolas are swollen from fluid from the fluids she received during the labour and birth, this may very well change the situation from “good enough”, to “not working at all”.

Some babies are unwilling to nurse, or suck poorly as a result of medication they received during the labour. Narcotics are responsible for many such situations, and meperidine (Demerol) is particularly bad as it stays in the baby’s blood for a long time and affects the way he sucks for several days. Even morphine given in an epidural (Epimorph) may cause the baby to be unwilling to nurse or latch on, since medication from an epidural definitely does get into the mother’s blood, and thus into the baby before he is born.

Questions? How do I position my baby to breastfeed? Note: For clarity, we are referring to baby as "he" and mother as "she. 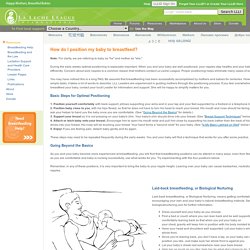 " During the early weeks optimal positioning is especially important. When you and your baby are well positioned, your nipples stay healthy and your baby can feed most efficiently. Concern about sore nipples is a common reason that mothers contact La Leche League. Proper positioning helps eliminate many cases of sore nipples. You may have noticed this is a long FAQ. Basic Steps for Optimal Positioning 1. These steps may need to be repeated frequently during the early weeks. Going Beyond the Basics As you and your baby become more experienced at breastfeeding, you will find that breastfeeding positions can be altered in many ways, even from feeding to feeding.

Remember, in any of these positions, it is very important to bring the baby to your nipple height. Help — My Baby Won’t Nurse! By Kelly Bonyata, BS, IBCLC Introduction The following techniques have proven helpful for a wide range of problems with baby refusing the breast. 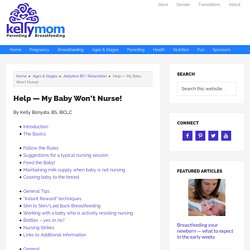 Some of the babies who might benefit include: a newborn (or older adopted baby) trying to figure out how to breastfeeda previously-weaned baby whom you wish to breastfeed againa baby who seriously resists nursing (or even being placed in a nursing position)a baby with nipple confusiona baby who is a fussy nurser (but does not completely refuse the breast)a baby on a nursing strike Even if you have a baby who adamantly resists nursing, getting your baby to breast is very possible but it will probably require time, patience, and kangaroo-style frequency.

If you’re getting discouraged working with your non-nursing baby, read this: My Baby Just Doesn’t Get It. The Basics Follow the Rules.