Animals and their needs 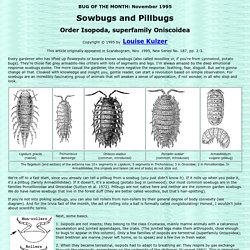 Every gardener who has lifted up flowerpots or boards knows sowbugs (also called woodlice or, if you're from Lynnwood, potato bugs). We're off to a fast start, since you already can tell a pillbug from a sowbug (you just didn't know it). If you're not into poking sowbugs, you can also tell rollers from non-rollers by their general degree of body convexity (see diagram).

Next, some basics. 1. 2. 3. 4. One more thing about feeding: sowbugs have the amazing ability to store very high concentrations of metals in the hepatopancreas. 5. Now if that doesn't convince you not to step on sowbugs, you're just not the sensitive type! References. GigaPan: Pill Bug. Fancy Mice. Behaviour Mice groom themselves with their teeth and claws. 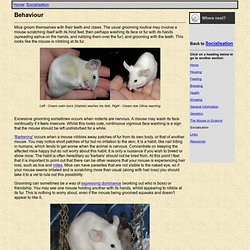 The usual grooming routine may involve a mouse scratching itself with its hind feet, then perhaps washing its face or fur with its hands (spreading saliva on the hands, and rubbing them over the fur), and grooming with the teeth. This looks like the mouse is nibbling at its fur. Left - Cream satin buck (Gabriel) washes his feet, Right - Cream doe (Gina) washing Excessive grooming sometimes occurs when rodents are nervous. 'Barbering' occurs when a mouse nibbles away patches of fur from its own body, or that of another mouse. Grooming can sometimes be a way of expressing dominance (working out who is boss) or friendship. A doe tries to take food from a cagemate Playing: No squeaks, or very quiet ones. Climbing, chewing and digging are all normal behaviours for mice. Fighting is most common when the cage has just been cleaned, as mice re-establish their individual territories and dominance within it. 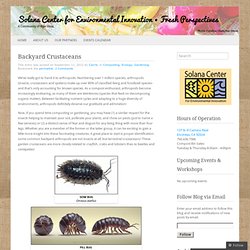 Numbering over 1 million species, arthropods (insects, crustaceans and spiders) make up over 80% of classified living and fossilized species- and that’s only accounting for known species. As a compost enthusiast, arthropods become increasingly endearing, as many of them are detritvores (species that feed on decomposing organic matter). Between facilitating nutrient cycles and adapting to a huge diversity of environments, arthropods definitely deserve our gratitude and admiration! Now, if you spend time composting or gardening, you may have (1) a similar respect for the insects helping to maintain your soil, pollinate your plants, and chow on pests (just to name a few services) or (2) a distinct sense of fear and disgust for any living thing with more than four legs. Whether you are a member of the former or the latter group, it can be exciting to gain a little more insight into these fascinating creatures. Like this: Like Loading... Corky's Pest Control: Sow Bug / Pill Bug.

SOW BUG / PILL BUG Pillbugs and sowbugs are not insects. 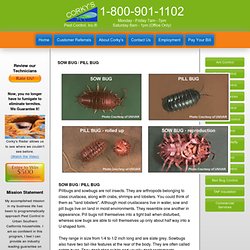 They are arthropods belonging to class crustacea, along with crabs, shrimps and lobsters. You could think of them as "land lobsters". Although most crustaceans live in water, sow and pill bugs live on land in moist environments. They resemble one another in appearance. Pill bugs roll themselves into a tight ball when disturbed, whereas sow bugs are able to roll themselves up only about half way into a U-shaped form.

They range in size from 1/4 to 1/2 inch long and are slate grey. Breathing by means of gills, they must live in a very damp, moist environment outside. Isopod Pill Bug and Sow Bug Info and Care. You can buy a variety of live pill bugs and sow bugs through our online store. 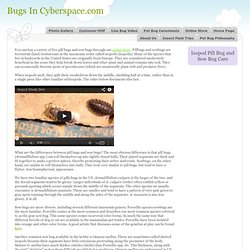 Pillbugs and sowbugs are terrestrial (land) crustaceans in the taxonomic order called isopods (isopoda). Many of the species that live in backyards in the United States are originally from Europe. They are considered moderately beneficial in the sense they help break down leaves and other plant and animal remains into soil. They can occasionally become pests of greenhouses (which are unnaturally plant-rich and predator-free). When isopods molt, they split their exoskeleton down the middle, shedding half at a time, rather than in a single piece like other familiar arthropods. Bug Island 9 - Pill Bug - Super Macro. What Kind of Dirt Should Be Used for Ant Farms With Red Harvester Ants?