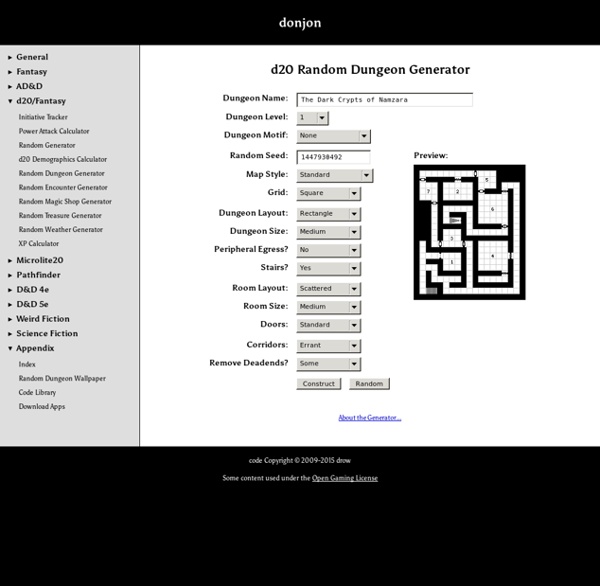 Home PAX East Live Game: 2014 When last we left our heroes, they had defeated one of the most terrible foes the Realms had ever seen, and carved out a little space in the city of Waterdeep that they could call their own. Now a new opportunity… err… adventure beckons! Word has reached the Acquisitions Incorporated headquarters of some dragon eggs that are in great peril. The Group games « Indie Fund Below is the list of games Indie Fund has funded so far(click on the title/image to go to the game-maker’s website!): Kachina Kachina is a whimsical physics toy that explores negative space by allowing players to manipulate a hole in the ground, swallowing up animals and spitting them back out elsewhere.

Random dungeon generator Version .68 Refresh the page for a new design. See below the dungeon for more info. Inkwell Ideas' Other Projects: Epic Game Room - The Game Tavern Ultanya sent us this epic game room they created called "The Game Tavern"! I'm sure every tabletop geek wishes this was their basement, I sure do! This took them 6 months of construction and contains everything from Pennsylvania blue stone to 100 year old barn wood from Wisconsin (the home of Dungeons & Dragons)... By: Ultanya Follow us on: Sangrolu: The Blood Lich The Blood Lich, or Sangrolu is truly an abomination; a merging of the lich and the vampire. Legends of the sangrolu's' creation abound in the tomes of long-dead sages, but most of them agree that the first sangrolu was a vampire who wanted to escape the bounds of the night and forever leave the dominion of Kanchelsis, the God of vampires. Sangrolu are created when a vampire creates a variant of the black potion used to turn a mortal wizard into a lich, and drinks it. (See Ecology, below) Vampires that imbibe this dark potion must still succeed a System Shock check, as must a mortal.

Wushu Skidoo Column Listing Members Search for an article by keyword: ( power search ) Columns by Same Author Indie Resources On the 30th July 2014 the site got updated, restrutured and redesigned… however the update is still not finished and thus this new Indie Resources overview page is partly incomplete. In case you are missing something you can still check out the outdated old Indie Resources page until the update is complete. Thank you for your understanding. (Game Making Tools, Game Design, Postmortems, Programming, Project Management…) (Create/Download Graphics, Hire Graphic Designer…) (Create/Download Sound + Music, Hire Sound Designer/Musician/Voice Actor…) Random city generator The Random City Map Generator creates a "random" city or town map suitable for fantasy and other role-playing games (RPGs) such as Dungeons and Dragons, Pathfinder, GURPS, HERO and many others. Note: you can try out version two of this tool. Because the map is made from layered images, to save or print a map you need to either: Take a sceenshot (print screen key) and paste into an image editor; Or print the page to a pdf file (Macs have this built-in, PCs may need a product like "cutePDF".)

The 10 Most Insane Old School Dungeons & Dragons Rules By Teague Bohlen The First Edition of Advanced Dungeons & Dragons was hugely popular and a kick-ass fun time. It was also known as a numbers-heavy intellectual and imaginative exercise (which was why some parents and educators backed it as a hobby — even sponsored gaming groups in afterschool programs). The nature of the game was both abstract (no gameboard; play happens in your head, for the most part) and concrete (weird dice, many tables to consult, a massive and growing amount of rulesets, books, and supplements); so it’s only natural that some parts of the game would be, well, a bit cumbersome. Tabletop Games - Alchemy Ingredients - Character Sheet OSRIC™ - Follower Sheet OSRIC™ - Character Sheet T&T™ 5e - Character Sheet T&T™ 7e

Deck of Many Boons Wouldn’t it be cool if you could get some sort of benefit in-game for doing things that promote better gaming? I do. That’s why I hand-crafted the Deck of Many Boons. Polygon Map Generation demo The simplest way to explore the maps is to click Random repeatedly. Try the various Island Shape, Point Selection, and View options. Feel free to use these maps for any purpose, including commercial use.

d20 Encounter Calculator Choose the number of monsters (or traps) encountered. Select the challenge rating (CR) of the monsters (or traps). Choose the number of player characters involved in the encounter. Black Phoenix Alchemy Lab: RPG The RPG Series Illustrations by the inimitable Julie Dillon. “You all meet at an inn.…” Pen and paper role-playing games have been a tremendous influence in my life since my formative years. My parents bought me the magenta D&D boxed set back in 1982, along with the Player’s Handbook, Dungeon Master’s Guide, and Monster Manual. My lifelong passion for fantasy, science fiction, war games, and mythology was well-channeled through RPGs, and I credit playing D&D with helping me sustain my imagination and sense of wonder through adulthood.