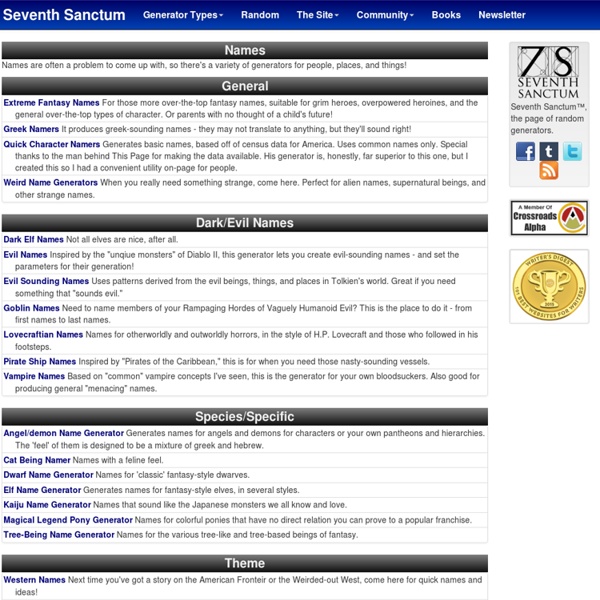 Names Names are often a problem to come up with, so there's a variety of generators for people, places, and things! General Extreme Fantasy Names For those more over-the-top fantasy names, suitable for grim heroes, overpowered heroines, and the general over-the-top types of character. Or parents with no thought of a child's future! Greek Namers It produces greek-sounding names - they may not translate to anything, but they'll sound right! Dark/Evil Names Dark Elf Names Not all elves are nice, after all. Species/Specific Angel/demon Name Generator Generates names for angels and demons for characters or your own pantheons and hierarchies. Theme Western Names Next time you've got a story on the American Fronteir or the Weirded-out West, come here for quick names and ideas! Locations Realms Need to give a Kingdom, Provice, or other setting an interesting title like "Dragon's Empire" or "Kingdom of the Great Grail"? Ships Pirate Ship Names For your more "piratey" sounding ships. More Resources!

Unique Baby Names Finding unique baby names for your baby can be interesting, and time consuming. You will need to look for a name that is one of a kind, but that is easier said than done. Some people choose to create unique baby names on their own, or customize the spelling of more popular names. One example for a baby girl is Alison, which can be spelled as Alison, Allyson, Alyson and Allison. Yet when taken to the extreme the hunt for a baby names that are unique can often lead to some very curious variants. There are some celebrities around today who have given their babies unique baby names which in the future may cause their kids to wonder what they were thinking (such as Pilot Inspektor and Moxie Crimefighter). So what should a parent look for when choosing a unique baby name for their baby? Well, parents who are looking for a unique name for their child will often be looking for ones that are unusual, individual and a little bit different from the run of the mill names. And now the BIG question...

Fantasy Name Generator By Samuel Stoddard - Version 1.5 One of the perks of creating fantasy stories -- whether by writing a story or game or by role-playing -- is you get to make up the names. Some people relish the task while others are frustrated by it. Some like it but can't seem to create names that are diverse enough. Fantasy Name Generator is a tool that can help you. It can generate an endless number of random names (of people, places, or anything) that would be suitable for use in a fantasy setting. In addition, this tool can be fairly amusing to use even if you don't have any name creating to do. You can use the fantasy name generator below.

Serendipity Paranoia: What's it all about? What is Paranoia about? Paranoia is a roleplaying game with a difference. Where as other RPGs encourage players to work together towards a common goal, Paranoia encourages backstabbing, double-crossing and bare-faced lying. The back of the Paranoia rulebook describes the game as follows: Imagine a world designed by Kafka, Stalin, Orwell, Huxley, Sartre and the Marx Brothers... Paranoia is a roleplaying game set in a darkly humorous future. You play one of The Computer's elite agents. Paranoia: A lighthearted game of terror, death, bureaucracies, mad scientists, mutants, dangerous weapons, and insane robots, which encourages players to lie, to cheat, and backstab each other at every turn. Is that fun? Trust us. Suffice to say, Paranoia is fun. Alpha Complex This is where everybody lives. The Computer The Computer runs everything within Alpha Complex. Though deranged, The Computer believes it is doing the right thing. Clones The Computer doesn't make that kind of mistake. Mutations Secret Societies

Medieval Names - List of Medieval Names Slack 'n' Hash- Name Generators After much deliberation… goodbye. Sort of. For now. I've neglected this site for a good couple of years, and let's face it, the months leading up to that point weren't exactly stellar either. So, time to own up, lower the curtain on this enterprise and consider my next step. Phil Smith , May 2011

3 MAN CHESS variant in the round List of Demon Names and Evil Names Check Out Our Top 10 Demon Movies You Must See! More About Demonic Names Page : 1/12 Throughout this demon section you will find various "demons" from all religions in which some may be deemed gods or mythical beings but will be classified as demonology. Here is a demon list with demon pictures that is sorted by demon names. Huge listing of demonic names, images and bios of demons on this page are of Aamon, Abaddon, Abatu, Abdiel, Abduxuel, Abigar, Abigor, Abraxas. Aamon (Egyption) Sun God. Abaddon (Hebrew) Destroyer, Advisor. Abatu An earth bound form of destructive/negative energy in the Order of the Nine Angles. Abdiel (Arabic) from "Abd" meaning slave. Abduxuel (Enochian) One of the demonic rulers of the lunar mansions. Abigar Can fortell future and give military advice. Abigor (Unk) allegedly a warrior demon who commands sixty legions. Abraxas Demon with the head of a king and snake-like feet, that holds a wip in his hands. Demons Total: 379

How to Create a Character Profile One of the most important elements in a novel or short story is characterization: making the characters seem vivid, real, alive. One technique that many writers use with success is to create a character profile for the main characters in the novel. The purpose of a character profile is twofold: to assist the writer in creating a character that is as lifelike as possible and to help with continuity issues in the story. In interviews many famous authors have stated that they came up with the basics of a character's personality and then they found that the character just "came alive" for them and ended up driving the story all on his own. But for the beginning writer, sometimes a more concrete approach is helpful. That is where the character profile comes in -- it is simply a tool for organizing your thoughts about a certain character and keeping track of a particular character's idiosyncrasies and relationships. Character profiles are useful when writing in any genres. Basic Statistics

Character Development Anonymous sent: Do you know any references or resources that are about a character that is a psychologist? I find a lot of information about how to be a psychologist but nothing about how they help their patients. What questions do they ask? Psychologists ask questions based on the issue that the patient came in with. A simple question to start with can be as simple as “how was your day?” Story time; When I first came in, it was because of my psychosis, which I had been suffering from for the past ten years. Needless to say, a diagnosis isn’t the be-all-end-all. What questions are asked or how the psychologist deals with different patients depends entirely on the situation, on the disorder and on the person. As for patient-psychologists, it’s the exact same for a patient-doctor. For any more questions, please visit edwardkenwayrps, and I’ll be more than happy to answer them

6 Key Things to Consider When Developing Characters By Jody Hedlund, @JodyHedlund I have to admit, I don’t write (or often read) character driven stories. My books are full of action and drama and are primarily plot-driven. But, that doesn’t mean I neglect my characters. In fact, I'm currently in the pre-planning stage for a couple different books. And one of the most important parts of my pre-writing process is developing my characters. I find this time of getting to know my characters one of the most delightful aspects of the entire writing process. I thought I'd share a few of the things I consider when I'm developing my characters in the pre-writing stage. 1. Obviously I consider their physical appearance. But I always go much deeper than physical appearance. 2. Not only do I try to understand their skills, abilities, and talents, but I also attempt to determine their personality type (are they dominant, passive, loyal, outgoing, etc.). 3. I may not need to know when they had their first scraped knee or lost tooth. 4. 5. 6.

25 Things You Should Know About Character - StumbleUpon Previous iterations of the “25 Things” series: 25 Things Every Writer Should Know 25 Things You Should Know About Storytelling And now… Here you’ll find the many things I believe — at this moment! — about characters: 1. Without character, you have nothing. 2. A great character can be the line between narrative life and story death. 3. Don’t believe that all those other aspects are separate from the character. 4. The audience will do anything to spend time with a great character. 5. It is critical to know what a character wants from the start. 6. It doesn’t matter if we “like” your character, or in the parlance of junior high whether we even “like-like” your character. 7. It is critical to smack the audience in the crotchal region with an undeniable reason to give a fuck. 8. You must prove this thesis: “This character is worth the audience’s time.” 9. Don’t let the character be a dingleberry stuck to the ass of a toad as he floats downriver on a bumpy log. 10. 11. 12. 13. The law of threes.

Questionnaires for Writing Character Profiles - Creative Writing Help Enter your e-mail to get the e-book for FREE. We'll also keep you informed about interesting website news. "I have searched the web and used different worksheets, but none have come close to your worksheets and descriptions of (what to do and what not to do). "As usual - I already love the course on Irresistible Fiction, rewriting a lot and improving greatly even after the first lesson. “Essentials of Fiction proved that I could indeed write and I wrote every day, much to my boyfriend's dismay (waa sniff).” - Jill Gardner "I am loving the course and the peer interaction on the blog is fantastic!!!" "I'm enjoying the weekly email course, Essentials of Poetry Writing. "Thank you for all the material in this course. "I was pleasantly surprised at the quality of the lessons and feel they were very helpful in introducing new ideas and perspectives to my writing. "Thanks very much for this course. "I'm learning so much. "Thank you so much!! "The Irresistible Fiction course is going well.