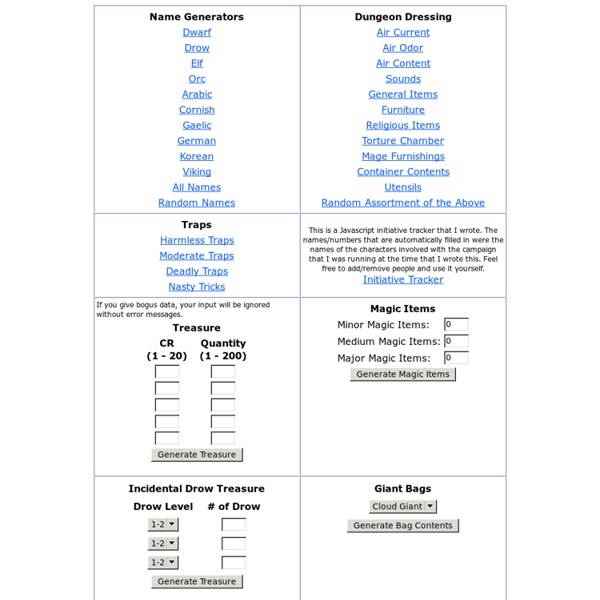 Conditions - PFBeginner Conditions are effects that happen to characters and monsters, like being deafened by a loud noise, entangled by a giant spider’s web, fatigued from a long day of work, or sickened by poison or disease. This section explains the rules for these conditions and things that may cause them. If more than one condition affects a character, apply them all. Fantasy Name Generator By Samuel Stoddard - Version 1.5 One of the perks of creating fantasy stories -- whether by writing a story or game or by role-playing -- is you get to make up the names. Some people relish the task while others are frustrated by it. Some like it but can't seem to create names that are diverse enough.

Springhole Tool (Character Name Generator) Character Name Generator Never again suffer the indignity of an elf named “Melf”, a bartender named “George”, or a mysterious unnamed stranger in town. The D&D Name Generator creates countless names for your heroes or NPCs, specific to their gender, race and class -- including titles and honorifics!. Fantasy Name Generator By Samuel Stoddard - Version 1.5 One of the perks of creating fantasy stories -- whether by writing a story or game or by role-playing -- is you get to make up the names. Some people relish the task while others are frustrated by it. Some like it but can't seem to create names that are diverse enough.

Dungeons & Dragons 3.5 Quick Reference Sheets This page contains printable PDF reference sheets for Dungeons and Dragons 3.5 Edition and for Dungeons and Dragons 3.0 Edition. There are now supplementary sheets for the spells found in the Book of Exalted Deeds and the Book of Vile Darkness. All the files are in PDF. They are grouped into a single ZIP for ease of download. The Domesday Book - Medieval Demographics Made Easy The Domesday Book Penned by Brandon Blackmoor, based on Medieval Demographics Made Easy by S. John Ross Here is subscribed the inquisition of lands as the barons of the king have made inquiry into them... <p>Forsooth, thy browser is truly antiquated!

Article (3.5 Edition Excerpts: Adventuring Gear) On sale September 18, the 3.5 Edition premium reprints go on sale, featuring new covers and the latest errata -- so, be sure to pick yours up at your friendly local book or gaming store! As the books themselves described their contents and role within the game: The Player’s Handbook has all the rules players need to create characters, select equipment, and engage in combat with a variety of supernatural and mythical foes. The Dungeon Master’s Guide provides the DM with advice, guidelines, and everything he or she needs to create challenges, adventures, and full-fledged D&D campaigns, including sections on prestige classes, magic items, and character rewards. The Monster Manual contains material that players and DMs alike will find useful.

The DM’s Adventuring Kit - Ministry of Intrigue I recently wrote about my return to Dungeons and Dragons, and promised another post where I would share what tools our group is using to facilitate our long-distance games. It’s really critical to make sure that game groups are well organized, or many campaigns will fizzle out due to the amount of work involved. Using the right tools can make this easier, but keep in mind that what works for my group may not work for yours. That being said, this process works very well for us, and should serve as a good starting point for anyone. It goes without saying that the most important tools in your planning process are the core rulebooks and an old fashioned whiteboard to map out your storyline and encounter sequence, but there are a number of other tools that are really helpful for organizing your campaign.