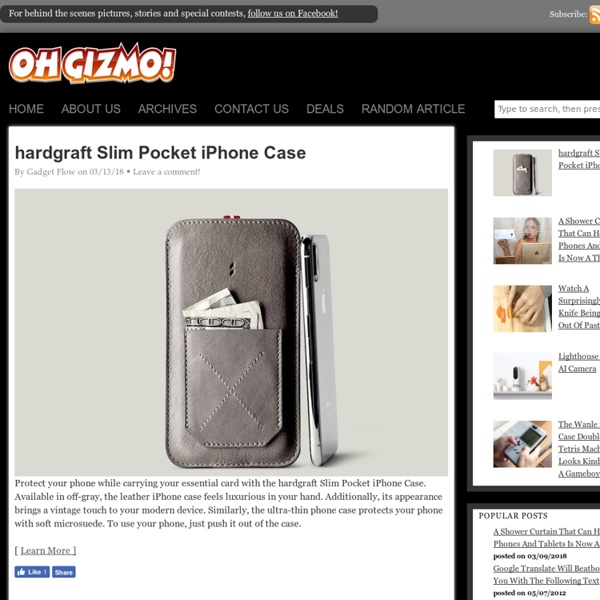 By David Ponce Mr. Blurrycam’s first cousin is Mr. Shakycam. They make for a fine pair as together they make up a sizeable portion of the pictures and videos found online. And while the Picosteady pictured above doesn’t help Mr.

Amnesty Generator puts iGoogle gadgets on your Windows 7 desktop You may have read about Amnesty Generator before on Download Squad - it's a free application that converts thousands of web gadgets and widgets - from dozens of sources - for use right on your Windows desktop. While it was designed for Vista, it's not too surprising to find that it also works well on Windows 7. Apart from iGoogle, other major widget providers like The New York Times, SpringWidgets, Widgetbox, and a slew of others are supported. The conversion process is extremely fast and requires only a few simple steps: copy and paste the HTML embed code, enter a title (or use the one Amnesty automatically grabs), select an image, and click generate. There are a couple minor issues to note. First, your image probably won't appear in the Widget gallery.

TechEBlog Download sexy all-glass gadgets for your Vista or Windows 7 desktop Looking for some fun, useful gadgets for your Windows 7 or Vista desktop? Sebastian compiled a list for the Windows 7 launch, and the crew at Into Windows have now shared a slick set of 14 which are dressed up (or is that undressed?) in transparent Aero Glass sexiness! The pack includes replacements for many of the common non-transparent gadgets like the Calendar, clock, CPU and bandwidth meters, recycle bin and mail status, radio, weather, notes, and system controls. I'm not always that keen on the glass effect -- and I know from past comments that many Download Squad readers aren't big fans either -- but these gadgets really do look quite good on the right wallpapers.

The Latest New And Cool Electronic Gadgets Review Guide - GadgetMadness Gadget Teardowns Massachusetts, The people of Massachusetts have always stood up for their right to repair. In 2012, voters passed a law that ensured residents' right to repair their car wherever they wanted. The Technology News Magazine and Gadget Shopping Guide Elite Bastards Last year AMD ran some rather successful game bundling promotions, so much so that Newegg awarded them an Eggie Award for Best Merchandising Campaign just a few days ago for their "Never Settle" game bundling campaign last year, and this year it looks like they intend to keep going with a good thing. Coming soon to a retailer/e-tailer near you will be the new Never Settle Reloaded gaming bundle. What games this time?