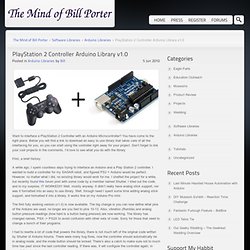 You have come to the right place. Below you will find a link to download an easy to use library that takes care of all the interfacing for you, so you can start using the controller right away for your project. Don’t forget to link your cool projects in the comments, I’d love to see what you do with the library. First, a brief history: A while ago, I spent countless days trying to interface an Arduino and a Play Station 2 controller. The first fully working version (v1.0) is now available. 8 Amazing Halloween Frights You Can Make With An Arduino. Learning electronics with an Arduino is fun, but using one to scare the life out of trick-or-treating children is just downright heavenly. 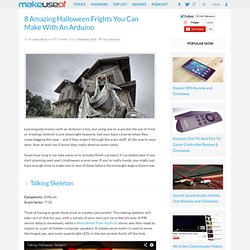 Get your back covered when they come begging this year – and if they make it through the scary stuff, all the way to your door, then at least you’ll know they really deserve some candy. Given how long it can take some us to actually finish a project, it’s probably best if you start planning next year’s Halloween scares now. New kit in store: simple clock with HDSP-2534 display. The centerpiece of this clock kit is the vintage-style 8-character display HDSP-2534 originally from HP, currently manufactured by Avago. 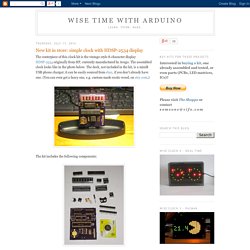 The assembled clock looks like in the photo below. The dock, not included in the kit, is a miniB USB phone charger; it can be easily sourced from ebay, if you don't already have one. (You can even get a fancy one, e.g. custom-made exotic wood, on etsy.com.) Insectbot Kit. Hello, new here. 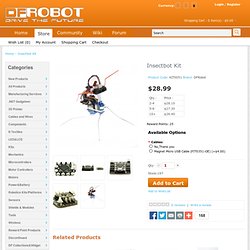 Just bought a 3 wire LCD module an get this message compiling the example of the wiki page. I got the new libraries supporting Arduino IDE 1.0 + from another post, and tried with IDE 1.0.1 and 1.0.4. Arduino - Webserver with an Arduino + Ethernet Shield. This project is all about using an Arduino with an Ethernet shield. 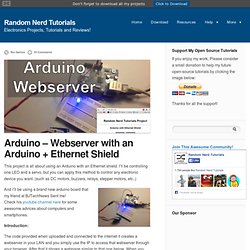 I’ll be controlling one LED and a servo, but you can apply this method to control any electronic device you want. (such as DC motors, buzzers, relays, stepper motors, etc..) And I’ll be using a brand new arduino board that my friend at BJTechNews Sent me! Check his youtube channel here for some awesome advices about computers and smartphones. Simple Arduino Serial Communication. 1. 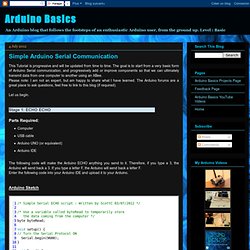 Once the code has been uploaded to the Arduino, open the Serial Monitor once again and type the following sequence of numbers: 2. While still in the serial monitor, type the following: Please note the commas between each numerical entry. A Wirelessly Controlled, Arduino-Powered Message Board. The Arduino has three types of memory: flash, EEPROM and RAM. 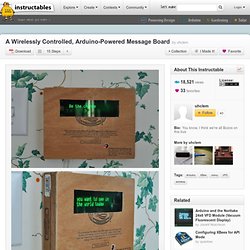 In this project, we use all three to store messages and values. Since we can't change the flash from inside the program, we use it to store 'canned' messages, or messages that don't change. We keep these short so they fit right on the display. We can also use the RAM to store a message, but we don't have much, so we keep that short too. Using a shift register 74HC595N with Arduino. In this simple project I’m going to use an 8-bit shift register 74HC595N to control 8 LEDs using only few pins of my Arduino Uno. 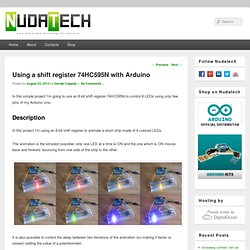 Description In this project I’m using an 8-bit shift register to animate a short strip made of 8 colored LEDs. The animation is the simplest possible: only one LED at a time is ON and the one which is ON moves back and forward bouncing from one side of the strip to the other. [Arduino] DIY (stupid and cheap) Plants Irrigator. It’s a burning summer in Florence and I needed a solution to watering my little plants I have around the house. 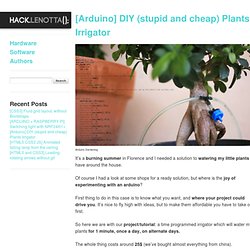 Of course I had a look at some shops for a ready solution, but where is the joy of experimenting with an arduino? First thing to do in this case is to know what you want, and where your project could drive you. It’s nice to fly high with ideas, but to make them affordable you have to take off first. Wireless PS2 Controller - 2.007 Arduino Nano Carrier. AMLA - Arduino MEGA Logic Analyzer. Arduino MEGA Logic Analyzer (AMLA) Project - 4th November 2011 Specification: - 2MHz sampling rate MAX (2MSps and adjustable in AVR Studio 4) - 8K Memory Depth MAX (7936 Bytes and adjustable in AVR Studio 4) - Single Triggering (Rise & Fall) Only. 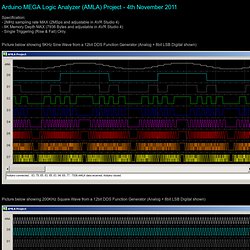 Picture below showing 5KHz Sine Wave from a 12bit DDS Function Generator (Analog + 8bit LSB Digital shown) Picture below showing 200KHz Square Wave from a 12bit DDS Function Generator (Analog + 8bit LSB Digital shown) MSGEQ7 by J Skoba » NueWire. This is an archive of an article written by J Skoba that was originally published here: Connecting an MSGEQ7 to an Arduino The MSGEQ7 by Mixed-Signal Integration is a Seven Band Graphic Equalizer Display Filter IC. What a mouthful! Long story short, it splits an audio signal into the dc equivalent of its amplitude at 7 set frequencies. MSGEQ7 Audio Spectrum Analyzer - ForgeFun. Introduction: Thank you for visiting and reading the first guide written on ForgeFun. This guide will introduce you to the MSGEQ7, which is a Graphic Equalizer Display Filter. This IC splits up the audio spectrum into seven bands – 63Hz, 160Hz, 400Hz, 1kHz, 2.5kHz, 6.25kHz and 16kHz. I will not go much into detail on the chip itself, specific information can be found on the datasheet linked below.

Today we will be using this IC to light up six LEDs from specific frequency bands. Please support this site by referring us to your friends and anyone who wants to build such project. Material List: Jones on Stepping Motors. Index Abstract This tutorial covers the basic principles of stepping motors and stepping motor control systems, including both the physics of steppers, the electronics of the basic control systems, and software architectures appropriate for motor control. Introduction Stepping motors can be viewed as electric motors without commutators.

Typically, all windings in the motor are part of the stator, and the rotor is either a permanent magnet or, in the case of variable reluctance motors, a toothed block of some magnetically soft material. CGCOLORMAX LCD Shield Example. This example project shows how to program an LCD Shield installed on the CGCOLORMAX. To use Shields, the Shield footprint is populated with female single inline sockets.

Two six-by-one and two eight-by-one headers are soldered in place on the CGCOLORMAX so that a Shield (or a stack of them) can be added to the board. The LCD Shield is actually two distinct circuits: an interface to a character-based LCD module, and a group of five buttons that can be read programmatically. Hacking Christmas Lights. Arduino-new-ping - Fast ultrasonic Arduino library for the HC-SR04, SRF05, SRF06, DYP-ME007 & Parallax PING))) ultrasonic distance sensors.

Background: When I first received an ultrasonic sensor I was not happy with how poorly it performed. I soon realized the problem wasn't the sensor, it was the available ping and ultrasonic libraries causing the problem. The NewPing library totally fixes these problems, adds many new features, and breathes new life into these very affordable distance sensors.

Having a Conflict with the Tone Library or Timer 2? Instead of the tone library, use my NewTone or toneAC libraries which instead uses timer 1 (and also has many other advantages). HC-SR04 Ultrasonic Sensor. Stepper Motor 5V 4-Phase 5-Wire & ULN2003 Driver Board for Arduino - Geeetech Wiki. Stepper Introduction. Internet Radio player using a NSLU2 nas-device. Drive a webpage in real-time using Arduino, SensorMonkey and Processing.js. Remote visualization of real-time sensor data. Wise time with Arduino. How’s the weather? TMP102. The TMP102 is a very simple, yet accurate, ambient temperature sensor which is capable of detecting .0625ºC changes between -25 and +85°C, with an accuracy of 0.5°C. Lifeboat Farm » The finished Arduino wireless water sensor. Back at the end of 2009 I started playing about with an Arduino solution to monitor the water level in a water tank about 300m from the house.

View topic - Website controlled Arduino Ethernet. Description:There are many pages online offering to show you how to host a website from an Arduino Ethernet, and control the Arduino from that hosted website, but those mainly share the same method: sending a request by changing the website url address.In this tutorial, I will be using the second available HTML method: sending a request by actually sending a DATA packet. Arducopter - Arduino-based autopilot for mulitrotor craft, from quadcopters to traditional helis. The DIY Drones development team is proud to bring you the ultimate open source quadcopter and helicopter UAV! Nick's LED Projects. Beta Board Preview Colorduino running the Plasma demo.