Simular strangeness in the proportion projects

"RU-promotional film is sexist, racist and hetero normative ' L'Oréal: Women in Science. L'Oreal buys back into tests on animals. Tried and tested: Activists from an animal rights group protest against animal testing. 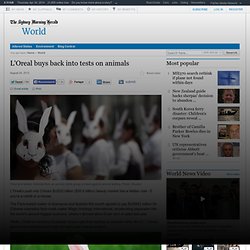 Photo: Reuters L'Oreal's push into China's $US32 billion ($35.6 billion) beauty market has a hidden cost - if you're a rabbit or a mouse. The Paris-based maker of shampoos and lipsticks this month agreed to pay $US843 million for Chinese cosmetics face-mask maker Magic Holdings International, accelerating expansion into the world's second-biggest economy, where it derived about 6 per cent of sales last year. While L'Oreal is barred by European Union rules from testing on animals within the EU, China's government requires such trials for every new beauty product. In L'Oreal's sights: rabbits and mice in China. China is the only major market where companies must test their mascaras and lotions on animals. Advertisement India banned animal testing for beauty products last month. Market researcher Mintel says at least 4249 beauty products were introduced in China over the past year. The Body Shop. The Body Shop International PLC, known as The Body Shop, has a range consisting of 1,200 products, including cosmetics and make-up in its 2,500 franchised stores in 61[2] countries. 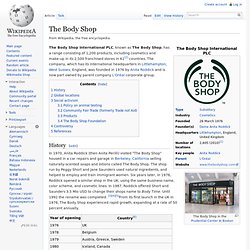 The company, which has its international headquarters in Littlehampton, West Sussex, England, was founded in 1976 by Anita Roddick and is now part owned by parent company L'Oréal corporate group. History[edit] Bikini calculus. Jaime Lynn gives calculus help introducing the basic principals in this tutorial. 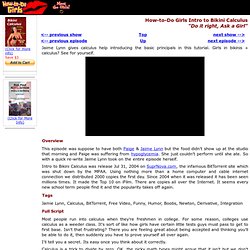 Girls in bikinis + calculus? See for yourself. Overview This episode was suppose to have both Paige & Jaime Lynn but the food didn't show up at the studio that morning and Paige was suffering from hypoglycemia. She just couldn't perform until she ate. Intro to Bikini Calculus was release Jul 31, 2004 on SuprNova.com, the infamous BitTorrent site which was shut down by the MPAA. Tags. Watch Intro to Bikini Calculus. The History Girls: meet the women building a bright future from the past. By Lisa Hilton PUBLISHED: 00:01 GMT, 3 November 2013 | UPDATED: 10:28 GMT, 4 November 2013 Being dated has never been so now. 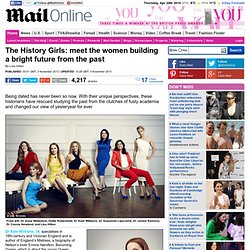 With their unique perspectives, these historians have rescued studying the past from the clutches of fusty academia and changed our view of yesteryear for ever From left: Dr Anna Whitelock, Hallie Rubenhold, Dr Kate Williams, Dr Suzannah Lipscomb, Dr Janina Ramirez, Dr Cassie Newland, and Lisa Hilton Kate's research is inspired by everyday documents, such as this deed of sale for a piece of land, written on vellum in 1735. Beauty en de Nerd. Beauty and the Geek.

Beauty and the Geek is a reality television series that is an international franchise, the U.S version is shown on The CW. 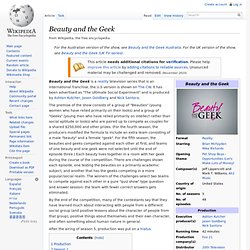 It has been advertised as "The Ultimate Social Experiment" and is produced by Ashton Kutcher, Jason Goldberg and Nick Santora. The premise of the show consists of a group of "Beauties" (young women who have relied primarily on their looks) and a group of "Geeks" (young men who have relied primarily on intellect rather than social aptitude or looks) who are paired up to compete as couples for a shared $250,000 and other prizes. (For the fourth season, the producers modified the formula to include an extra team consisting of a male "beauty" and a female "geek". For the fifth season, the beauties and geeks competed against each other at first, and teams of one beauty and one geek were not selected until the end of episode three.) 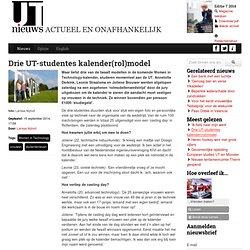 Female scientists #prettycurious about campaign aimed at young women. The path towards equality in science, technology, engineering and maths (Stem) is destined, it seems, to be littered with cringe-inducing campaigns designed to appeal to women. 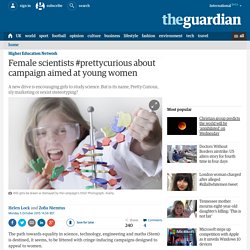 The latest effort is from energy company EDF, which is encouraging girls to pursue further study and careers in these traditionally male-dominated fields with a campaign called Pretty Curious. Perhaps unsurprisingly, it has attracted criticism for its seemingly stereotypical view of female scientists. But EDF claims that the wording was a deliberate attempt to prompt conversation around sexism and science. In a statement, the company said: