Thistle Threads Blog. If you used to have a RSS feed for this blog, The Embroiderer’s Story, and would like to have one for the new blog there is a way to do that now on the page. 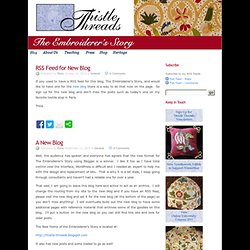 So sign up for the new blog and don’t miss the posts such as today’s one on my favorite textile stop in Paris. Tricia Well, the audience has spoken and everyone has agreed that the new format for The Embrodierer’s Story using Blogger is a winner. I like it too as I have total control over the interface, WordPress is difficult and I needed an expert to help me with the design and replacement of bits. That is why it is a bit stale, I keep going through consultants and haven’t had a reliable one for over a year. That said, I am going to leave this blog here and active to act as an archive. The New Home of the Embroiderer’s Story is located at: Biscornu. Hier is hij dan, de beschrijving voor de biscornu.Je zult zien dat het in elkaar zetten meer werk is dan het borduren. 1. Als de rand rond je geborduurde blokje groot genoeg is kun je er stiksteken omheen borduren. Om de foto duidelijk te maken heb ik twee steken tussen het blokje en de stiksteken gelaten. 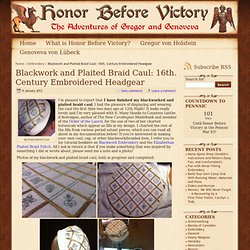 I had the pleasure of displaying and wearing the caul the first time two days ago at 12th Night! It looks really lovely and I’m very pleased with it. Many thanks to Countess Ianthe d’Averoigne, author of The New Carolingian Modelbook and member of the Order of the Laurel, for the use of two of her charted botanicals which appear as fills in my design.

I charted the rest of the fills from various period extant pieces, which you can read all about in my documentation below! Blackwork Embroidery Make-and-Take Needlebook Class - Embroidery - blackwork class - Honor Before Victory. I am teaching my first class in blackwork embroidery at Twelfth Night in the Canton of Ealdonordwuda on at 2:00 pm on January 7th, 2012, and my next class will be at Val Day on February 11 in the Canton of Three Hills! 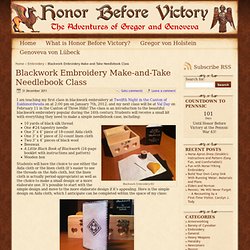 The class is an introduction to the beautiful blackwork embroidery popular during the 16th century. Blackwork Caul - top. Jessamyn's Regency Costume Companion: Florentine gown. The Camicia. 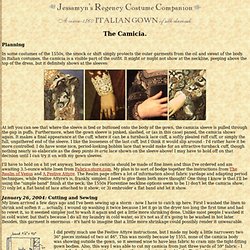 Blackwork Embroidery. Description: Band of double-running stitch embroidery in a pomegranate design, worked in black sewing silk and synthetic gold on a linen ground with approximately 50 threads per inch, worked over two threads, intended for a 16th century-style man’s shirt. 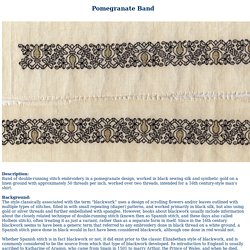 Background: The style classically associated with the term “blackwork” uses a design of scrolling flowers and/or leaves outlined with multiple types of stitches, filled in with small repeating (diaper) patterns, and worked primarily in black silk, but also using gold or silver threads and further embellished with spangles. However, books about blackwork usually include information about the closely related technique of double-running stitch (known then as Spanish stitch, and these days also called Holbein stitch), often treating it as just a variant, rather than as a separate form in itself. However it was first introduced, Spanish stitch spread rapidly and was worked throughout Western Europe in the 16th century.

Bibliography: Elizabethan Smock. New Year Gifts to QE I By the Lady Carewe, a smock wrought with blak silk, and coller and ruffes, with gold and silk. 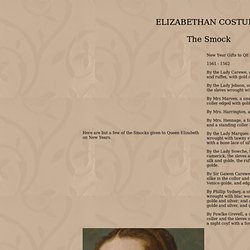 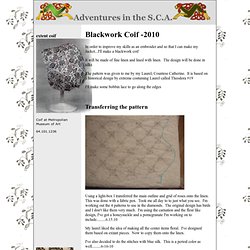 The design will be done in silks The pattern was given to me by my Laurel, Countess Catherine. Wp-content/uploads/2012/01/EmbroideredCaulDocs.pdf. 16th Century Blackwork Partlet - NEEDLEWORK. I have several Tudor events to go to this summer, and as I will be giving blackwork displays, this required the need for some new posher Tudor kit Complete costume is almost finished, but wanted to post up some of the embroidery I have done on it here I found the pattern for the collar on . 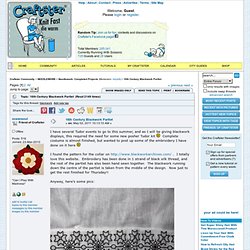 I totally love this website. Embroidery has been done in 1 strand of black silk thread, and the rest of the partlet has also been hand sewn together. The Blackwork Jacket Project - damerosalind's Photos. Embroidered Caul. The caul is a small soft cap worn by women in late 16th century England. 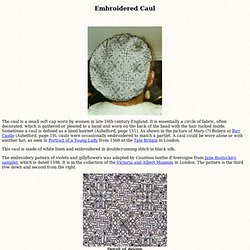 It is essentially a circle of fabric, often decorated, which is gathered or pleated to a band and worn on the back of the head with the hair tucked inside. Sometimes a caul is defined as a lined hairnet (Ashelford, page 151). As shown in the picture of Mary (?) Boleyn at Birr Castle (Ashelford, page 19), cauls were occasionally embroidered to match a partlet. Man's Blackwork Shirt - Brodyworke Accounts - www.kimiko1.com. Home > Gentlewoman's Warderobe > Brodyworke Accounts > Man's Blackwork Shirt This is my husband's 1580's blackwork shirt that I started on December 8, 2003. 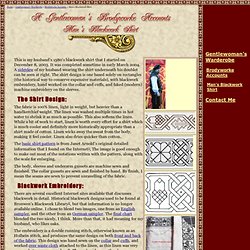 It was completed sometime in early March 2004. A sideview of my husband wearing the shirt underneath his doublet can be seen at right. The shirt design is one based solely on rectangles (the historical way to conserve expensive materials), with blackwork embroidery, hand worked on the collar and cuffs, and faked (modern) machine embroidery on the sleeves. Periodicity- Research Applied. A Tudor Gentleman's Blackworked Shirt.

Time for a new project. Inspiration came in the form of this painting - a beautifully blackworked shirt showing brilliantly against the gentleman's red suit. Himself also likes red...The shirt design was, of course, simple (see?