64 Reasons That IT Projects Fail - Simplicable. Top Reasons Why Software Projects Fail and How to Avoid Them. Software development requires one of the most difficult and essential project management skills – the ability to plan ahead. 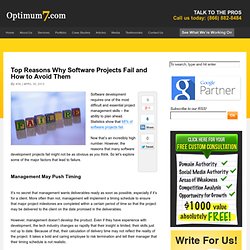 Statistics show that 68% of software projects fail. Now that’s an incredibly high number. However, the reasons that many software development projects fail might not be as obvious as you think. So let’s explore some of the major factors that lead to failure. Management May Push Timing It’s no secret that management wants deliverables ready as soon as possible, especially if it’s for a client.

However, management doesn’t develop the product. While managers may believe that this employee is the problem, not their schedule, it’s important that management realize this is the employee that cares the most about the success of the project and the one who has the most realistic outlook on how long a project will take. Changing Client Needs A software development company’s clients are generally not tech-oriented.

Clients’ needs must be clearly understood the first time. Top 7 reasons for project management failure. In my experience as a Project Manager, I've seen many projects fail. 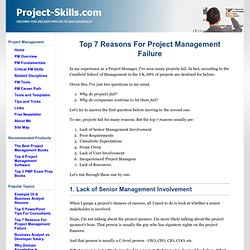 In fact, according to the Cranfield School of Management in the UK, 68% of projects are destined for failure. Given this, I've just two questions in my mind. Why do projects fail? Why do companies continue to let them fail? Let's try to answer the first question before moving to the second one. Top 5 Reasons Projects Fail. According to the Project Management Institute (PMI), it is expected that 15.7 million new project management jobs will be created globally, with 6.2 million of those expected in the US by 2020. 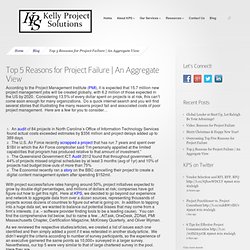 Considering 13.5% of every dollar spent on projects is at risk, this can’t come soon enough for many organizations. Do a quick internet search and you will find several stories that illustrating the many reasons project fail and associated costs of poor project management. Here are a few for you to consider… An audit of 84 projects in North Carolina’s Office of Information Technology Services found actual costs exceeded estimates by $356 million and project delays added up to 389 days.The U.S.

With project success/failure rates hanging around 50%, project initiatives expected to grow by double digit percentages, and millions of dollars at risk; companies have got figure out how to get this right. *Some other notable issues included tools, methodology, documentation, and quality. Number one reason projects fail. Why Tech Projects Fail: 5 Unspoken Reasons. Modelling Solution - Top 3 Reasons Projects Fail: A Compilation Report. Why projects fail gartner - Google Search.

McKinsey Report Highlights Failure of Large Projects: why it is better to be small, particularly in IT. A recent set of studies published by McKinsey Quarterly provides further evidence that the bigger they are the harder they fall. 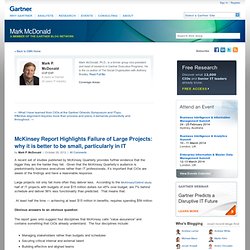 Given that the McKinsey Quarterly’s audience is predominantly business executives rather than IT professionals, it’s important that CIOs are aware of the findings and have a reasonable response. Large projects not only fail more often they deliver less. According to the McKinsey/Oxford study half of IT projects with budgets of over $15 million dollars run 45% over budget, are 7% behind schedule and deliver 56% less functionality than predicted. That means that: At least half the time — achieving at least $15 million in benefits, requires spending $59 million Obvious answers to an obvious question The report goes onto suggest four disciplines that McKinsey calls “value assurance” and contains something that CIOs already understand.

Each of these ‘value assurance’ disciplines is self evident for large and complex projects. I believe they should. What do you think? Gartner Survey Shows Why Projects Fail. Analyst : Lars Mieritz Published: 1 June 2012 ID:G00231952 A recent Gartner user survey shows that, while large IT projects are more likely to fail than small projects, around half of all project failures, irrespective of project size, were put down to functionality issues and substantial delays. 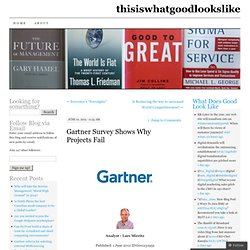 Recommendations To optimize success, look for ways to limit the size, complexity and duration of individual projects, and ensure funding has been committed.Stay on top of costs, especially for the largest projects. Survey Objective Data Insights Figure 1. Source: Gartner (June 2012) Many small brooks make a great river. Figure 2. Methodology. 101 Common Causes – Why Projects Fail. There are many causes of project failure and every failed project will have its own set of issues. 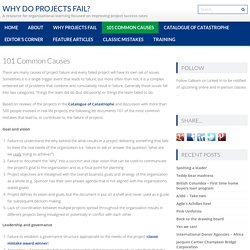 Sometimes it is a single trigger event that leads to failure, but more often than not, it is a complex entwined set of problems that combine and cumulatively result in failure. Generally these issues fall into two categories. Things the team did do (but did poorly) or things the team failed to do. Based on reviews of the projects in the Catalogue of Catastrophe and discussion with more than 500 people involved in real life projects, the following list documents 101 of the most common mistakes that lead to, or contribute to, the failure of projects: Goal and vision Failure to understand the why behind the what results in a project delivering something that fails to meet the real needs of the organization (i.e. failure to ask or answer the question “what are we really trying to achieve?”) Leadership and governance Stakeholder engagement issues Team issues.