3D Face Scans That Spot Early Autism and Help Identify Genes Responsible (VIDEO) Autism has been a disease difficult to identify in young children, often preventing initiation of early stage therapy that can have the most dramatic positive impact. 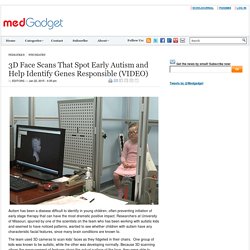 Researchers at University of Missouri, spurred by one of the scientists on the team who has been working with autistic kids and seemed to have noticed patterns, wanted to see whether children with autism have any characteristic facial features, since many brain conditions are known to. Gear VR Innovator Edition.

Samsung Gear VR Innovator Edition is powered by the Samsung Galaxy Note 4 and is not compatible with other smartphones or devices. 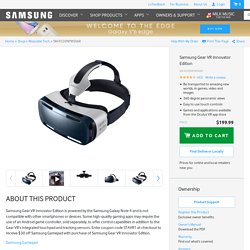 In what could have profound implications for understanding the process of aging, a trio of scientific papers published today show that infusing elderly mice with the blood of young mice can reverse many of the mental and physical impairments of growing old. 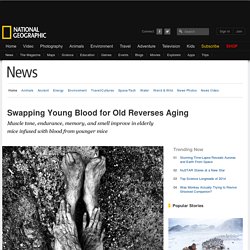 Expanding on earlier research, the three studies—published concurrently in Nature Medicine and Science—demonstrate rejuvenating effects in memory, muscle strength, endurance, and sense of smell. Together, they suggest that there might be factors in the young blood that can produce globally regenerating effects in older animals. In addition to reversing the normal ravages of aging, the papers suggest, young blood might help turn around declines in cognitive function associated with age-related conditions such as heart enlargement and Alzheimer's disease. Controlling genes with your thoughts. Researchers led by ETH Zurich professor Martin Fussenegger have constructed the first gene network that can be controlled by our thoughts. 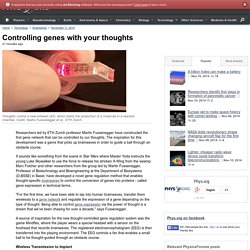 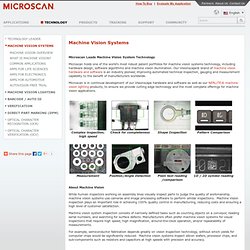 Our Visionscape® brand of machine vision hardware and software is an industry pioneer, improving automated technical inspection, gauging and measurement capability to the benefit of manufacturers worldwide. Microscan is in continual development of our Visionscape hardware and software as well as our NERLITE® machine vision lighting products, to ensure we provide cutting edge technology and the most complete offerings for machine vision applications. About Machine Vision While human inspectors working on assembly lines visually inspect parts to judge the quality of workmanship, machine vision systems use cameras and image processing software to perform similar inspections.

Tissue Engineering & Regenerative Medicine. Imagine if you could take living cells, load them into a printer, and squirt out a 3D tissue that could develop into a kidney or a heart. 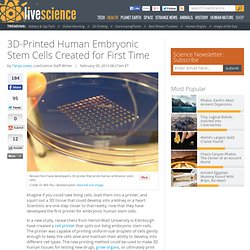 Scientists are one step closer to that reality, now that they have developed the first printer for embryonic human stem cells. In a new study, researchers from Heriot-Watt University in Edinburgh have created a cell printer that spits out living embryonic stem cells. The printer was capable of printing uniform-size droplets of cells gently enough to keep the cells alive and maintain their ability to develop into different cell types. The new printing method could be used to make 3D human tissues for testing new drugs, grow organs, or ultimately print cells directly inside the body. Human embryonic stem cells (hESCs) are obtained from human embryos and can develop into any cell type in an adult person, from brain tissue to muscle to bone.

Fasotec Print a 3D model of your unborn baby with the ‘Shape of an angel’ service. Fasotec and Hiroo Ladies clinic, have started a service that makes 3D models showing the inside of the abdomen during pregnancy. 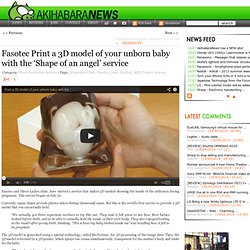 This service began on July 30. Currently, many clinics provide photos taken during ultrasound scans. The Dirtiest Things in a Hotel Room Revealed. Want to stay away from germs during your next hotel stay? 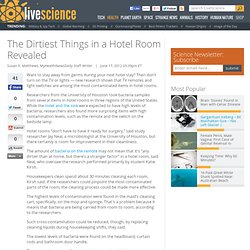 Then don’t turn on the TV or lights — new research shows that TV remotes and light switches are among the most contaminated items in hotel rooms. Researchers from the University of Houston took bacteria samples from several items in hotel rooms in three regions of the United States. How GE Branded My Unborn Baby. 238,900 miles from Earth, I see my unborn child for the first time. 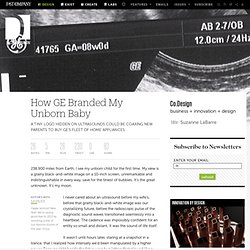 My view is a grainy black-and-white image on a 10-inch screen, unremarkable and indistinguishable in every way, save for the tiniest of bubbles. It’s the great unknown. It’s my moon. The face machine that knows if you're happy or bored. 9 August 2013Last updated at 09:50 ET By Samantha Fenwick You and Yours BBC reporter Samantha Fenwick tried out the expression-mapping software. 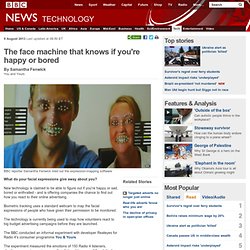 Huggies Smart Belt Lets Expecting Dads Vicariously Experience Baby's Kicks. 4inShare Kimberly-Clark, the maker of Huggies brand of diapers, wants to help expecting fathers participate in their kids lives even before it’s time to go diaper shopping. The company partnered with Ogilvy & Mather, Argentine advertising firm to create a pair of belts worn around the belly by both the mother and father, which let dads feel the baby kicks in real time.